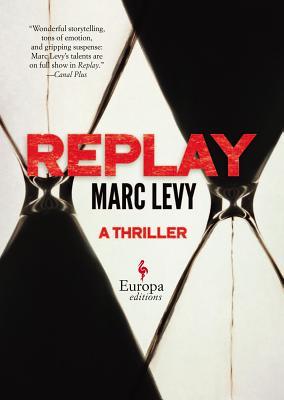 Marc Levy established himself as a bestselling author with his 2000 English-language debut, If Only It Were True, which was filmed as “Just Like Heaven,” a pleasant romantic comedy with a supernatural twist starring Mark Ruffalo and Reese Witherspoon. The Ruffalo character moves into a San Francisco apartment still inhabited by the ghost of the previous occupant, Witherspoon. Romance and comedy ensue.

Since then, Levy, who writes in French and appears here in translation, has gone on to become the most widely read French author in the world, with 30 million books sold in over 40 languages.

Who can argue with success like that? Levy’s newest book, Replay, also features a paranormal twist, though not as much romance or comedy. Replay is more of a thriller, one that starts with New York Times investigative reporter Andrew Stilman being stabbed to death during his morning jog in Manhattan. He awakens two months prior to his death with a chance to avoid the fatal wound by finding out who kills him and why.

There are numerous suspects. There is a jealous, coke-snorting colleague at the Times, envious of Stilman’s success and his relationship with their editor. There are people whose happiness was ruined by one of Stilman’s investigative pieces about adopted Chinese babies being stolen from their rightful parents. Stilman’s bride, whom he jilts on their wedding day (mind you, he waits until after the wedding) with the revelation that he’s in love with a woman he met briefly in a bar just two weeks earlier, also must be considered a suspect. And there are some shadowy Argentinian heavies whom his current investigation threatens to expose for their roles in that country’s period under dictatorship when thousands were “disappeared.”

Clearly, Stilman is not the most sympathetic of characters. He himself is surprised at the length of the list of suspects. He recruits his best friend Simon and a retired New York detective he once encountered to help him unravel the mystery. Somehow he manages to convince them of his improbable situation — having been killed in the future and now with a chance to prevent it — or at least get them, like the reader, to suspend disbelief and let the story play out.

It is an intriguing premise. There is something here for the murder mystery fan, the thriller fan, and the science fiction/time travel fan. If you like any of these genres and want an unchallenging read for the beach or (short) plane trip, this may be your book.

Levy makes no pretense at writing literary fiction. His prose is workmanlike, his characters fairly two-dimensional to serve the purposes of the plot, and, while the book moves along, it is hardly as “riveting” as blurbed on the jacket copy.

Stilman’s emotional development is limited enough that this book would almost qualify for young adult status, were it not for the Argentinean torture scene involving some disappeared activists the reporter is tracking. Stilman’s love life could best be described as jejune. His repartee with best friend Simon borders on the banal.

Levy’s depiction of the life of an investigative reporter or office intrigue at the Times lacks any authentic ring, and seems more like what a French author living in New York might imagine it to be. Stilman remains oblivious to the manipulation by his editor, even though the reader is repeatedly made aware of it. When one of the characters he encounters in his trip to Argentina finally calls him naïve, the reader can only say, “Amen.”

As the replay of Stilman’s final two months nears an end, the array of false leads and red herrings begins to sort itself out. He is on the verge of identifying his attacker, but that very fact threatens to alter the timing, perhaps robbing him of the chance to actually prevent it.

Does he use this second chance as a way to redeem himself? Will he avoid the missteps that led to that fatal attack? Levy successfully maintains the suspense until the end and does not provide the reader with any easy answers. Unlike the Ruffalo-Witherspoon romantic comedy, this plot is not wrapped up with an unequivocally happy ending.

By the same token, this latest thriller lacks the originality and winsomeness of the debut novel that propelled Levy to bestsellerdom. It is a clever, harmless enough thriller that his name will sell, and one that can while away a few summer hours for the undemanding reader.

Darrell Delamaide is a writer in Washington, DC. He is the author of Gold, a financial thriller, and The Grand Mirage, an espionage adventure set in 1910.

A veteran journalist’s first novel honors the venerable Paris Herald, though perhaps with a surfeit of voices.