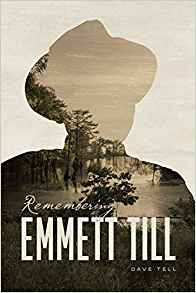 There’s a town in the Mississippi Delta called Money. In that town are the ruins of what was once Bryant’s Grocery. The ruins are partly hidden by vines and small trees. It’s a depressing scene in a depressed area. At the corner is an historical marker that can take your breath away:

“Fourteen-year-old Emmett Till came to this site to buy candy in August 1955. White shopkeeper Carolyn Bryant accused the black youth of flirting with her, and shortly thereafter, Till was abducted by Bryant’s husband and his half brother. Till’s tortured body was later found in the Tallachatchie River. The two men were tried and acquitted but later sold their murder confession to Look magazine. Till’s death received International attention and is widely credited with sparking the American Civil Rights Movement.”

Dave Tell’s Remembering Emmett Till tells the story of torture and murder and recent efforts to recall it. And while it would be heartening to think that Mississippi’s remembrance of the gruesome killing is an effort to right a terrible wrong, there are economic considerations that mute those good intentions. As it turns out, there’s money to be made from Civil Rights tourists.

Tell is a professor at the University of Kansas and is the principal investigator of the Emmett Till Memory Project. His book offers details of not only the execution of the boy, but also of the legal and civic efforts to deal with its aftermath.

Of all the injustices endured by African Americans in Jim Crow Mississippi, none was more horrendous that that done to Till, a Chicago teenager whose mother had sent him to visit Mississippi family in the summer of 1955. Shortly after walking into Bryant’s, Carolyn Bryant’s husband, Roy, and his half-brother, J.W. Milam, along with unnamed “others,” abducted the boy, took him to a shed, and beat him to death.

They wrapped Till’s body in a tarpaulin and drove to Tallahatchie County, where they used barbed wire to attach a cotton-gin fan to the corpse. They then threw the now hideously disfigured Till into the Tallahatchie River.

When his body was found and sent back to Chicago for burial, Till’s mother insisted on an open-casket funeral so the world could see what had happened to her boy down South. There was widespread outrage.

Roy Bryant and J.W. Milam, whose guilt was never in doubt, were put on trial. Their defense? They’d only done what was necessary to protect a delicate white woman from the evils of black lust. Their attorney told the all-white, all-male jury: “Every last Anglo-Saxon one of you has the courage to free these men.”

Fast-forward a few decades. The town of Sumner, Mississippi, needing money, sought to restore the now-unused courthouse where Till’s murderers were tried. Leflore County, where Money is located, had the same desire to capitalize on the tragedy. And Sunflower County, where Till was tortured, also became part of the remembrance.

And that’s what Tell’s book is about: the murder, the trial and its aftermath, and the efforts to remember. Yet he spares no detail about the economic considerations.

I could not decide whether to be enlightened or appalled. How would Emmett Till react to having his murder be the catalyst for tourist dollars? Is it better to exploit the horrific crime than to ignore it altogether?

The area where the killing occurred, writes Tell, remains breathtakingly impoverished, but race relations are much better — so much better that the white folks who allowed Till’s killers to go free might not recognize the place today. And there are many signs on the Mississippi Freedom Trail put up by a special black-white commission tasked with helping us all remember.

“Each new sign the commission installs hides the ecology of memory, hides the entanglement of race and commemoration, and hides the power of the sign to testify to what persists from the distant tragedy that it commemorates….A bulletproof sign might tell of the events of Till’s murder, but it will obscure the racial legacy of the murder.”

So far, the sign mounted where Till’s dead body was found has already been stolen, replaced, shot up, cut down, and re-installed.

And then shot up again.

After Steve: How Apple Became a Trillion-Dollar Company and Lost Its Soul

A fascinating peek behind the iCurtain.