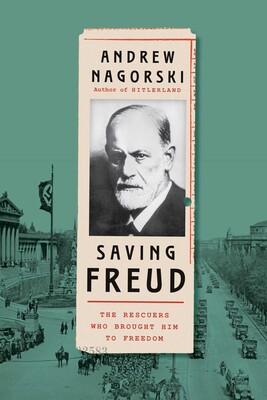 Andrew Nagorski’s Saving Freud ought to be coming to a theater near you. This nonfiction work crackles like a novel and sparks with the razzle-dazzle of a big-screen extravaganza: an unforgettable cast of characters (think “The Dirty Dozen”), spine-tingling suspense (“The Day of the Jackal”), a death-defying savior (maybe “Mephisto”), and Nazis — the epitome of evil.

“This book is definitely not ‘The Sound of Music,’ but it’s part biography and part thriller,” Nagorski told an audience recently gathered at Politics and Prose in Washington, DC, to discuss the publication of his eighth book. Having written Hitlerland: American Eyewitnesses to the Nazi Rise to Power, The Nazi Hunters, and 1941: The Year Germany Lost the War, the former Newsweek bureau chief has mastered the Nazi terrain.

The plot of Saving Freud centers on how a group of six loving friends of the world-famous psychoanalyst finally convinced him to leave Austria in 1938 on the jack-boot heels of Hitler’s storm troopers as they invaded Vienna.

Even as the Nazis banged down the doors of his office and home at Berggasse 19, Sigmund Freud, then 81, still believed he’d be spared the catastrophe that had befallen other Viennese Jews. Without saying a word, he glared at the intruders looting his apartment. Hitler’s minions seemed visibly intimidated. They addressed him as “Herr Professor” and backed out of the apartment, loot in hand, stating they would return at another time.

When the Nazis then burned his confiscated books in the public square, Freud seemed unperturbed. “What progress we are making,” he told a patient. “In the Middle Ages they would have burned me. Now they are content with burning my books.”

Freud could’ve escaped years before, but he refused to join the hordes of Jews fleeing Vienna in the early 1930s. Referring to himself as a “Godless Jew” and an atheist, he maintained he was immune from persecution because he was not religious. His sole allegiance to Judaism, he said, was to not deny being born a Jew. He also considered himself apolitical and therefore safe from the upheaval thrashing around him.

Interestingly, while revolutionary in his thinking, Freud led a conventional life centered around hearth and home. “I’m all for sexual freedom,” he once remarked, “but not for myself.”

Nagorski admits that when it came to the Nazis, Herr Doktor Freud, a world-shaking intellect known for his revolutionary theories, was “naive…astonishingly naïve.” Others might say dumbfoundingly reckless given that he was determined to live out his days in Vienna even after the Anschluss in March 1938, when Germany annexed Austria.

At that point, Freud’s adoring circle whirled into action, determined to seek asylum for him and his family in London so he could realize his life’s wish “to die in freedom.” The group included Maria Bonaparte, princess of Greece and Denmark, who lived in Paris as a practicing psychoanalyst after seeking Freud’s help to achieve orgasm. She provided Freud with the protection money he needed to bribe his way to safety.

Another member was William Bullitt, U.S. ambassador to Russia and France, who’d sought Freud’s counsel when his marriage was falling apart. During their sessions, they discovered they both despised Woodrow Wilson and later collaborated on a biography of the former president that was published in 1966 to “overwhelmingly negative” reviews.

Also part of the group was Dorothy Tiffany Burlingham, granddaughter of the renowned jeweler who founded Tiffany & Co., who became the lifelong partner of Freud’s beloved daughter Anna. Next was Ernest Jones, a onetime patient and close friend of Freud’s, and president of the International Psychoanalytical Association. Jones flew to Vienna in 1938 to insist that Freud leave the country. “This is my home,” the psychoanalyst said. “Your home is the Titanic,” retorted Jones.

Max Schur, who became Freud’s physician and treated him for the throat cancer he suffered as a result of refusing to give up cigars, played a role, too. When Schur’s family emigrated to the U.S. to escape the Nazis, the doctor remained in Vienna until Freud’s departure for England. Only then, after arranging for Freud’s medical care in London, did Schur join his own family in America.

Dr. Anton Sauerwald, a Nazi bureaucrat, is the shocking thunderbolt in this rescue saga and the team’s unlikeliest member. He was assigned by Nazi high command to rifle through Freud’s financial documents and destroy his historic library, but as an admirer of the pioneer of psychoanalysis, he did neither. Instead, Sauerwald removed evidence of Freud’s foreign bank accounts and arranged for his massive collection of books, papers, and journals to be secretly stored in the Austrian National Library, where they remained hidden until after the war.

Each figure was crucial to the rescue because it took all six working in concert to get Freud to leave his home and office for England, where he spent the remaining 15 months of his life at 20 Maresfield Gardens, Hampstead, in North London. There, his rescuers had recreated his consulting room in faithful detail.

The British press heralded his arrival with effusive coverage, and Freud’s new life of freedom gave him great pleasure. As he wrote to his brother in Switzerland: “Our reception was cordial beyond word. We were wafted up on wings of mass psychosis.” He was welcomed into the Royal Society of Medicine and visited by prominent guests like H.G. Wells and Salvador Dali.

Still, Freud missed Vienna. “The feeling of triumph on being liberated is too strongly mixed with sorrow,” he confided to a friend, “for in spite of everything I still greatly loved the prison from which I have been released.”

Freud’s life of freedom ended for good on September 23, 1939, when his pain became excruciating and, as he told his physician, “the torture makes no sense anymore.” Remembering his promise, Dr. Schur gave his patient an injection of morphine which led to Freud’s “peaceful sleep.” As his adored Anna later told a friend:

“I believe there is nothing worse than to see the people nearest to one lose the very qualities for which one loves them. I was spared that with my father, who was himself to the last minute.”

Saving Freud seems to have been written for the silver screen, and one can only hope that someone like Steven Spielberg finds his way to this book.

A Heart That Works