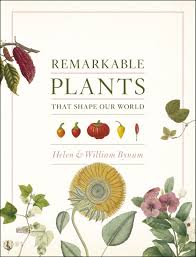 Most of us are vaguely aware that the decline and inevitable extinction of many familiar plants will have an enormous impact on the Earth’s agriculture and climate, yet we know very little about the fantastic range of plants that feed, clothe, shelter, intoxicate, and cure us. Remarkable Plants That Shape Our World is a timely corrective to our complacency — a gloriously illustrated celebration of the history, utility, diversity, and sheer wonder of the botanical world that powers our planet.

The authors argue that modern ingenuity has not changed our fundamental need for plants or our reliance upon a wide range of botanical species as the basis of all food chains. Utility as well as beauty are basic values of modern civilizations; plants supply both. This book focuses on those diverse plant kingdoms which, since the last Ice Age, have enabled us to make the transition from hunting and gathering to agriculture.

Helen and William Bynum, historians of medicine and science, respectively, are also the editors of Great Discoveries in Medicine.In Remarkable Plants, they draw upon the unmatched archival resources of the Royal Botanic Garden, Kew to illustrate their text with an abundance of rare prints and drawings. The artwork’s captions contain interesting and often unexpected information on plants’ geographical origins, culinary uses, and religious and medicinal traditions.

Each section explores the cultural, geographical, and economic associations of these plants, with full-color illustrations highlighting both whole plants and distinctive leaves, blooms, and fruits. The book achieves a balance of science and art. Although the text is aimed at readers interested in the historical and cultural aspects of horticulture, it is a volume that geographers, gardeners, cooks, nutritionists, and tourists alike will enjoy.

In theme and thesis, the Bynums draw upon the seminal work of ecological historians Henry Hobhouse (Seeds of Change, 1986), Alfred Crosby (Biological Imperialism, 1993), and, most recently, Londa Schiebinger (Plants and Empire, 2004).

Hobhouse was the first to argue that sugar, tea, cotton, potato, quinine, and cocoa were transformational factors in world settlement. The Bynums, however, take a more generalist view of “founder crops” — grains, legumes, tubers — arguing that the farmers who cleared the land and grew the crops also transformed the plants they came to rely on and so those crops were, themselves, “domesticated.”

As these crops radiated out from the Fertile Crescent, seeds and ideas followed trade routes and empire. The successful cultivation of such cash crops as tobacco, sugar, tea, or coffee was the enabler. To that traditional list, the Bynums add oil palm, banana, chocolate, and rubber, noting the environmental damage and loss of habitat that invariably followed monoculture.

The most interesting section of the book, “Healing and Harm,” considers the therapeutic value of plants that possess compounds which have specific physiological effects on the human body. The authors emphasize the need for distinction between plants from which opiates are extracted (such as the South American Erythroxylum coca and the poppy) and those which promote healing (like the willow tree, which yielded aspirin, and Mexican yam, a source of cheap steroids).

As British scholars, the Bynums consider such historic English plants such as the yew, Taxus baccata, from which the medieval longbow was made. A variation of this once abundant plant is T. brevifolia, which, in 1962, yielded taxol, found in the bark of mature Pacific Coast yews and one of the most important anti-cancer drugs ever discovered. Sadly, medicinal success has led to exploitation, and the plant is now endangered.

Although the plants in each section are well chosen, some are invariably more compelling than others. Illustrations reflect the exclusive use of the Royal Botanic Gardens archive so that some world-class illustrators are not represented. But this is a minor omission among such an abundance of beautiful art.

Remarkable Plants is an excellent resource for laymen and expert botanists alike. Readers will come away with a renewed respect for the role that the plant kingdom has in our lives and its importance for our future.

Linda Lear is an environmental historian and biographer who loves plants and is an enthusiastic collector of botanical art.

The Triumph of the Amateurs