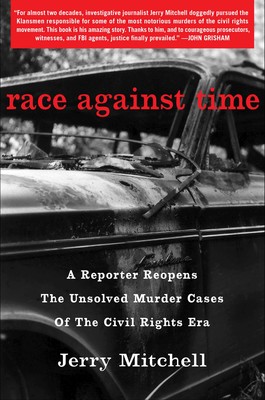 Jerry Mitchell, a seasoned investigative reporter for the Jackson, Mississippi, Clarion-Ledger, demonstrates his heroic commitment to justice in Race Against Time, a chronicle of his decades-long pursuit of several prominent racist murderers.

Mitchell has made it his life’s work to bring to trial the homegrown terrorists who fostered white supremacy and hatred for decades in the American South, particularly in Mississippi. He has done so at great personal sacrifice and risk, and his book is a compelling record of his efforts.

The first crime Mitchell investigates is the 1964 “Mississippi Burning” murders of voting rights advocates James Chaney, Andrew Goodman, and Michael Schwerner. The victims were arrested in Meridian, Mississippi, on trumped-up charges and set free — directly into the clutches of a waiting band of Klansmen.

At the hands of the Klan, the three were shot dead, and their bodies dumped into an earthen dam on property owned by one of the conspirators. At the time, only seven of the perpetrators were convicted, and then only of federal civil rights violations. The state of Mississippi could not be bothered, until 2005, to prosecute them at all.

Mitchell also investigates the 1963 murder of Medgar Evers, killed in front of his family for the “crime” of registering voters. His killer, Byron De La Beckwith, went free after two trials resulted in hung juries. The Mississippi White Citizens’ Council made this possible by paying for his defense and threatening potential jurors.

In 1966, civil rights leader Vernon Dahmer’s home was firebombed, and he was shot to death as his family looked on. The White Knights of the Klan who killed him got away with it. Only four of the mob were convicted, and the governor of Mississippi lightened their sentences.

The most horrific of the crimes Mitchell investigates is the 16th Street Baptist Church bombing in Birmingham. In 1963, four young girls (Addie Mae Collins, Cynthia Wesley, Carole Robertson, and Denise McNair) attended the church’s “Youth Day,” only to be blown up by the Klan. It took 13 years for the bomb-maker to be convicted; the ringleader remained free even longer.

It is a stain on this nation that the perpetrators of so many racially fueled horrors still walk free. Only after Mitchell begins investigating are local officials spurred into revisiting some of these unsolved crimes.

One reason for the delay is how deeply the Klan and its “Christian Identity” offshoot have influenced their communities. The Klan directly intervened in all the trials Mitchell recounts — even 30 years later, they were making threats against those who would testify. The author himself is warned by a local sheriff that the Klan is looking to harm him, and that he should vary his commuting routes.

Even more disturbing is how the Klan has infiltrated the ranks of law enforcement and government. For example, Beckwith initially got away with Evers’ murder because several Klan-affiliated police officers lied on his behalf. At the time Mitchell catches up with him, one of those officers is a city councilmember.

In 1994, while Beckwith’s attorneys challenged the constitutionality of trying someone years after a crime, the Mississippi Supreme Court narrowly ruled in favor of allowing a new trial (during which Beckwith was finally convicted). One of the dissenting judges? A former leader in the Mississippi White Citizens’ Council.

The strength of Race Against Time is Mitchell’s ability to weave a compelling narrative, much like a police procedural, outlining how reluctant prosecutors are convinced to fight for justice. If the book has a weakness, it is its overwhelming detail. With so many crimes being explored, it’s easy to become confused as to who’s who. Also, the author could better clarify how he came to learn certain key bits of information.

Mostly, readers will come away from this book feeling angry and frustrated. Angry that it takes so long to exact justice on behalf of these victims’ families. Frustrated that the Klan and its affiliates are still allowed to operate with seeming impunity.

The cowardice even of those sympathetic to racial injustice is jarring. Today, multiple district attorneys are still reluctant to gamble on launching prosecutions of past race-based crimes, despite their hesitation itself making such cases weaker, as potential witnesses grow old and pass away.

When asked, “Why don’t we just move on?” this is ancient history, perhaps we should respond with another question: How quickly would you move on if your loved one was murdered by a white supremacist, and the state looked the other way? Luckily for all of us, brave journalists like Jerry Mitchell refuse to move on — or look away.

The Great Surge: The Ascent of the Developing World

How the lives of the poor have improved in the last half-century — and how that progress can continue.