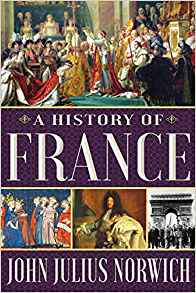 Imagine you have an 88-year-old grandfather who lives in London and is crossing the pond to tell you about his newest book. Besotted by all things French, he intends to take you from Gaul to de Gaulle in 400 pages, and your mother insists you give him respectful attention. After all, he’s written 23 history books, edited 11 more, and narrated 30 television documentaries. He’s also hosted the BBC Radio game show “My Word!”

On top of that, he’s a viscount.

(That’s a British title that confers immense prestige on a man, who gets to be addressed in the U.K. as “Lord.” In the five degrees of British nobility, viscount is less than duke, marquess, or earl, but higher than baron. At royal investitures, each nobleman wears a coronet and a crimson coronation robe with a white miniver fur collar.)

So now you’re prepared for John Julius Norwich and A History of France, which is the viscount’s Valentine to Francophiles.

“I have loved every moment of the work on [this book],” he writes in his preface, “and see it as a sort of thank-offering [sic] to France for all the happiness that glorious country has given me over the years.”

He indicates this may be the last book he writes, and, sadly, he’s right; he died this year, a few months after its publication. He ended his French history at 1945, leaving the Fourth and Fifth Republics to another chronicler.

The preface intrigues as Norwich begins with the first words Charles de Gaulle wrote in his memoirs: “Toute ma vie, je me suis fait une certaine idee de la France.” (“All my life, I have had a certain conception of France.”)

Lest you think the author identifies with Le gran Charles, be assured that he applauds him as “one of the greatest men in all [French] history,” but lambasts him for “almost unbelievable pusillanimity and small-mindedness.” To underscore this point, Norwich writes: “No wonder Churchill used to say, ‘The heaviest cross I have to bear is the Cross of Lorraine.’”

Being the son of Duff Cooper, for whom the title Viscount Norwich of Aldrich in the County of Sussex was created in 1952, the author casually drops the names of de Gaulle and Winston Churchill, men he had met through his father when he was a teenager.

He recalls meeting de Gaulle at a commemorative luncheon on the third anniversary of the D-Day landings. Young Norwich had arrived late after all the plates were cleared, except for de Gaulle’s plate of apple pie, into which he was tapping his cigarette ash. The hungry young man asked the general if he might have his dessert, and the general immediately pushed the plate over, apologizing for the ashes.

The teenager replied: “I said that it would be an honor to eat the general’s ash — a remark that proved a distinct success. It was my only conversation with the great man; but unlike most of those he had with my father or Winston Churchill it could hardly have been more friendly.”

The author’s preface becomes even more intriguing when he mentions spending Christmas 1944 in the British embassy in Paris, where his father was serving as ambassador. There, the young man meets the poet Louise de Vilmorin, “my father’s mistress,” whom, he claims, “my mother loved…almost as much as my father did,” adding that his mother, Lady Diana Cooper, “had no conception of jealousy” about his father’s many lovers.

And we’re still only in the preface!

If you’re as curious as I was, you might be tempted to Google Duff Cooper, whom you’ll find described by London’s Telegraph as “a legendary womanizer” whose “many…early liaisons left his wife in tears but as his health failed, she accepted them.”

Now the author’s family history is looking as interesting as any of the 58 French kings he writes about, including Charlemagne, with his “five legal wives and four supplementary spouses.” I confess: I ran to Google again to learn that “supplementary spouses” are “an important but often unrecognized relationship” in a marriage, rather like the third leg of a tripod.

After reading the preface, one almost wishes Norwich had written his own memoir and left the history book to French scholars. He states that he did not write his book for professional historians, and certainly none would nominate him for a Pulitzer.

He breezes through the Crusades in a few pages, dusting off two centuries’ worth of battles, from the Fall of Jerusalem to the Fall of Constantinople. Along the way, he introduces a variety of regents, from Clovis I to Napoleon III, with 18 Louises in between, plus an odd duck named Dagobert I, who wore his trousers inside out. (Why? We’re not told.)

You can’t help but be amused as you meet various kings, including Robert the Pious (he liked to pray), Philip the Amorous (he was excommunicated for adultery), Louis the Fat (he weighed a lot), John the Posthumous (he lived just five days), John the Fearless (he loved waging war, but then, all French kings did), Charles the Bold, Philip the Fair, and Philip the Good (he founded the Order of the Golden Fleece).

You’ll appreciate the author’s Oxford credentials when he writes that King John of England “was responsible for the murder” of his nephew, Prince Arthur of Brittany, which, Norwich adds, provided “Shakespeare with one of his most poignant scenes.”

(The Groucho-glasses-wearing duck will drop down and pay you $25 if you can name the Shakespeare play to which Norwich refers, because he doesn’t tell. He assumes you are as educated as he is and will know the Bard’s “The Life and Death of King John.”)

Far be it from me to question an esteemed viscount, but I was startled to read that when St. Denis, third-century bishop of Paris, was beheaded, he “calmly picked up his severed head and walked several miles to the site of the abbey that bears his name while preaching a sermon on repentance.” No documentation, but in a sly footnote, Norwich quotes Madame du Deffand: “It’s the first step that counts.”

Regarding Madame: Again, consult Google and then — Ça Alors — continue your merry romp through A History of France.

Kitty Kelley is the author of several number-one New York Times bestsellers, including Jackie Oh!, Nancy Reagan, and The Family: The Real Story Behind the Bush Dynasty.