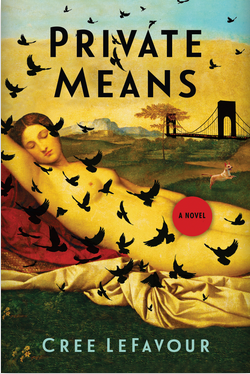 There’s something of a velvet rope stretched across the opening of Cree LeFavour’s debut novel, Private Means. Just a few paragraphs in, we learn about Maebelle, a dog lost on New York’s Upper West Side. The posted reward? Two thousand dollars.

If that strikes you as ridiculous, this may not be your book — or rather, this may be precisely your book, because for the next 200 or so quicksilver pages, LeFavour is unsparing in her exploration and interrogation of her characters’ cosseted, if fragile, world of class and privilege. She examines their lives with an anthropologist’s care. Or maybe an anatomist’s.

The author of several cookbooks, LeFavour clearly knows how to cut close to the bone.

The dog is Alice’s. She and her husband, Peter, are in their early 50s, and with their beautiful twin daughters off at Berkeley, the couple is adrift. They sleep in separate beds, sex a thing of the past; dinner is delivered by this restaurant or that; conversation occurs or doesn’t, supplanted by whatever’s distracting them on their phones.

Peter is a psychiatrist with a busy practice; Alice holds a Ph.D., but has wandered aimlessly since getting her degree, years before. A grant opportunity looms that could reenergize her career — if she could only energize herself enough to apply.

In the right light, even acid sparkles, and this otherwise scarifying book does so on every page. A pre-publication blurb cites Cheever and Ian McEwan as comparisons, but the closer one by far is Tom Wolfe, who could learn a thing or two from LeFavour’s searing examination of Alice’s and Peter’s struggle to navigate their world.

The book glories in details, taxonomizing everything from prescriptions — not just an antipsychotic but Zyprexa, and at the 15mg dose — to wine — not just a Haut-Brion but a “slightly over-the-hill but still alive 1971 Chateau la Mission Haut-Brion” — to a dozen other gradations that carefully measure and shape this world.

It’s a measurement both Peter and Alice are constantly taking. Here’s Peter en route to a friend’s summer house — a luxury he and Alice can’t afford — and caught in traffic:

“Focusing on the shameful expanse of faded silver paint covering the pitted middle of his 2011 Toyota Highlander, he breathed deeply…[and] tried to relax into the drive. The proletarian dignity of his well-used car against the piercing glint of the freshly acquired Lexuses, Land Rovers and BMWs jockeying for position around him gave them a taste of self-righteous modesty.”

Peter, and occasionally Alice, makes such trips many times over the course of a summer. The book is cleverly organized around a series of summer weekends, stretching from Memorial Day to an exhausted Labor Day. (“Relaxing, come August, was a chore. Labor Day weekend was the merciful last of it.”)

Along the way, it spoils nothing (unless you skipped over the line earlier in this review that explained, “They sleep in separate beds, sex a thing of the past”) to reveal that both Peter and Alice stray to varying degrees. How each of those storylines arc, though, is a surprise, especially Alice’s.

If the National Book Awards decides to carve out a separate subcategory for depictions of fights between lovers, LeFavour should take both the prize and honorable mention for two such scenes in this novel. They’re gripping, deftly handled, and deeply satisfying.

I’ll nominate her for one more imaginary award, as well: research. It’s not just the unerring aptness of all those status details mentioned earlier, nor the deep, holistic view of psychiatry from the doctor’s side of the couch (there’s even a brief and funny history of such couches here), but that each character, even Maebell, feels fully real.

Alice, for example, doesn’t just have a doctorate in biophysics; she studies the murmurations of starlings, or more specifically:

“[F]lock dynamics. The phenomenon…is known as scale-free correlation. This isn’t of course limited to biology. In fact the closest correlations to starling flock patterns are in the broader literature of criticality. This includes crystal formations and avalanches — in other words, stable systems poised on the brink of dynamic change. When so poised at the moment of criticality, the system itself has the capacity for near-instantaneous transformation, often without a single catalyst.”

Sure, there’s an extended metaphor at work there. But there’s also science, love, sex, and the interconnectivity of all life, including one long-lost dog. It will take an entire summer to sort out Maebelle’s fate, but the reader who takes this book to the beach — most likely a virtual one this year — will find themselves racing to finish it before even one sunset passes.

Liam Callanan’s most recent novel is Paris by the Book.