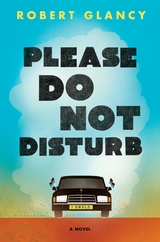 Sometimes an author’s second book is much harder to write than his first.

That may be especially true if the initial effort was as well-received as Robert Glancy’s clever 2014 debut, Terms & Conditions. In that story — amusingly laden with footnotes readers ignored at their own peril — the central character paid an unexpectedly large price for overlooking all the fine print none of us tend to read.

Please Do Not Disturb, beautifully written if a bit thinly plotted, is packed with strong hints that Glancy worried about suffering a sophomore slump, and those asides are among the book’s best moments.

Glancy was born in Zambia and raised in Malawi before moving to the U.K. at age 14. He studied history at Cambridge. One of the principal characters in Please Do Not Disturb is Sean, whose life path has taken him in more or less the opposite direction: He was born in Ireland and moved to a tiny and repressive African dictatorship called Bwalo, where he’s teaching at a university while trying (and failing) to write his second book.

Bwalo was apparently among the last outposts in the British Empire, gaining its independence less than four decades prior. Since then, it has been run, barely, by the now-decrepit King Tafumo — a not-quite-native son who went to Britain as a child, became a doctor, and chose precisely the right moment to return to Africa and lead Bwalo’s successful effort to break the bonds of colonialism.

Only one person knows Tafumo is not all he claims to be, and that’s his boyhood friend now known as Josef. He wrote the official history of Bwalo and was responsible for creating the myths that led citizens to see Tafumo as their savior. He is reluctantly okay with that, reasoning “all countries contrive bloody fairy tales to lend credence to the illusory borders scribbled by men.”

But Josef — a powerful minister in the regime — has now seen too much, and he’s started a secret file chronicling abrupt disappearances and other misdeeds. He’s not sure what to do with it, though, and is understandably terrified of being found out.

At its heart, Please Do Not Disturb is Josef’s story, although there are plenty of other notable characters (maybe too many) and a few tangents taken — most to help establish tensions preceding the Big Day, the annual celebration of independence.

It’s the one day each year when the king speaks to his subjects, a bash described by one local as when everyone makes “a big hoopla out of a small fracas.” But first, most of the country gets a new coat of paint so it can sparkle for the celebrities rumored to be on the way to help celebrate.

They’re hoping for Clooney. Who they get instead is Truth, a spoiled 19-year-old American pop singer who’s promoting a record called “Beautiful Africa.” It’s probably fitting and perhaps even a wink at the reader that Truth is for the most part a distraction.

Much of the book is set in the Hotel Mirage, where the door of a mysterious room bears the sign using the words that serve as the book’s title. Dark conversations take place in the Mirage. Sometimes they’re surreptitiously recorded by a little boy who’s been given a Dictaphone to play with and who later asks his innkeeper parents why anyone would be nervous about a chicken coop, mishearing a similar word he’d caught on tape.

Sean, while flirting with Bel, the woman serving as Truth’s publicist/protector, pulls some of the strands together. “Bwalo may look like roses with its safaris and smiling natives, but it takes a lot of terror to achieve this much peace,” he observes, then adds, “In the same way oil is the economy of Saudi Arabia, corruption is the Bwalo economy.”

Because he’s unable to summon his creative muse, Sean’s teaching job is what makes it possible for him to spend most of his time with a drink in hand. Sometimes he grouses about how the corruption affects him personally: He’s been trying for two years to get rid of a rotting bookcase at the school but hasn’t succeeded because everyone insists it’s government property and its removal must be officially authorized. There’s a metaphor in there somewhere.

Just as often, he talks about not making any progress on that elusive second book. He explains to Bel that, “My writing’s been consistently received with universal disinterest.” When she tries to encourage him, there’s this wonderful bit of banter:

Sean: “I’m trying to break the record for longest gap between books. Presently held by Joyce who took seventeen years to complete a book. It was Ulysses, mind you, so I suppose it was worth the wait.”

Bel: “Are you working on the Great African Novel?”

Sean: “Achebe, Conrad and a thousand others beat me to it.”

Sean: “I refer you to the aforementioned Ulysses.”

Sean: “I’m blocked. I can barely write a check.”

Thing is, it’s not necessarily so. When he actually does sit down at his ancient Royal typewriter, “right at the deepest point of despair, my fingers suddenly began to dance, black bloomed on white as I hit a rhythm of fluid words.”

But almost immediately a bunch of keys jam together, and Sean does something that’s very satisfying but certainly won’t help him finish his book. If it reflects Glancy’s own experience, I’m glad I wasn’t walking under his office window at the time — and I’m glad he didn’t let it get in the way of completing Please Do Not Disturb.

Randy Cepuch’s A Weekend with Warren Buffett and Other Shareholder Meeting Adventures was published in 2007 by Basic Books. He has yet to write a second book.