An outstanding collection of tales about the pitfalls and rewards of human connection. 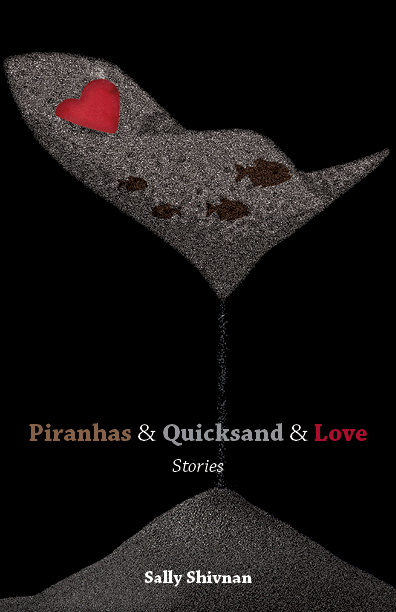 If piranhas, quicksand, and love have anything in common, it’s that they all possess the power to harm. But of the three, it’s only love that can also be a great healer.

Such is the case in Sally Shivnan’s new collection of stories, Piranhas & Quicksand & Love, where love, in its various forms — kindness, understanding, and sacrifice — acts as a lifeline for a cast of characters, most of whom are flailing in the depths.

The collection’s opening story, “Dicking the Buddha,” is about a woman’s desperate attempts to keep her sister (and her sister’s children) financially afloat by moonlighting in the drug trade. Doubling as a spiritual parable, the story asks, “What do you do if you meet the Buddha on the road?” The main character, Tabby, just might find out when she transports drugs from Florida to Virginia, using her sister’s baby as a cover.

In “Simon’s Berth,” a divorced woman in between jobs meets Simon, a boatyard drifter, and discovers his secret life, which in turn, causes her to reflect on the role luck has played in her own life. But more profoundly, “Simon’s Berth” is a haunting metamorphosis story of Simon’s time in the womb-like bow of the ship where he lives, and of the main character’s unsettling realization that all humans are animals — animals who wish to be seen.

The title story, “Piranhas & Quicksand & Love,” tells of Maria, a single mother who’s sinking under the weight of her son’s disability and her own mother’s disapproval. One night, after a sophisticated stranger treats her with dignity, she finds herself transformed.

Shivnan’s stories are awash with emotion, filled to the brim with a sense of longing in those who seek connection but can’t always find it. In “Lola,” for instance, the titular character realizes her boyfriend doesn’t love her. “Why doesn’t anyone ever tell you that love, the love you wait for your whole life, that love can be old even when it’s new? Even at its very beginning, dry, old as death.”

The 14 stories in Piranhas & Quicksand & Love are clear and reflective, some achieving master status: an immediate, compelling conflict paired with characters the reader will come to care about. Shivnan also displays range — perspectives are diverse in terms of gender and ethnicity. The stories bubble over with feeling, but some steer toward philosophy, while others walk the deck of humor.

Unlike a lot of collections, which grow tiresome on the thematic level (especially as readers approach the end), Shivnan’s work isn’t stagnant with sameness-of-feeling. Unless you count depth, the ubiquitous appearance of water, and a recurring Valentine to the East Coast (where many of the stories are set).

Read this book to savor its beautiful language, to drink in its gentle defiance. Piranhas & Quicksand & Love calls readers to ride the waves of a sea besieged by predatory behavior and natural disaster. To sail on, nevertheless, toward love.

Dorothy Reno is a senior editor and contributor at the Washington Independent Review of Books. Her short fiction has been published by Prairie Fire, FREEFALL, and Red Tuque Books. She lives in Tbilisi, (former Republic of) Georgia, and tweets at @plotwrite.