Glass and Gavel: The U.S. Supreme Court and Alcohol 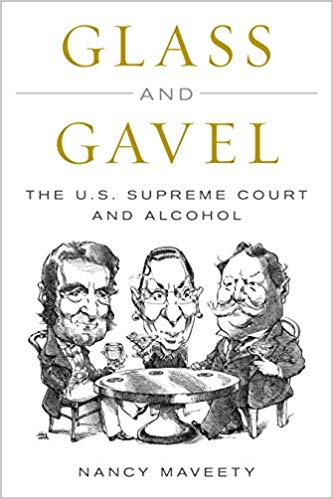 John Marshall was not only the first of America's great chief justices, and likely the greatest, but also, according to author Nancy Maveety, "the greatest epicure of drink to sit as chief."

Marshall established the Supreme Court as a constitutional force for the other two branches to reckon with and also, according to Maveety, made the court into a "boozily social workplace" with collegiality enhanced by frequent imbibing of his famous Quoit Club punch.

Maveety, a political scientist at Tulane University who specializes in Supreme Court studies, traces the justices' drinking habits through time and the court's voluminous alcohol-related jurisprudence in her informative and thoroughly entertaining history, Glass and Gavel: The U.S. Supreme Court and Alcohol.

As Maveety writes in her preface, the court's decisions have helped construct each era's culture of alcohol "by creating legal space for a culture of its enjoyment or by endorsing a culture and legal regime of its regulation."

The court's shifting jurisprudence played out in its handling of alcohol-related cases as early as the 19th century. Marshall struck a blow for the national government's power over interstate commerce in 1827 by leading the court in nullifying a Maryland law that would have required a state license to import, among other commodities, alcoholic beverages.

Two decades later, however, Marshall's states-rights-minded successor, Roger Taney, led the court in upholding temperance-motivated state laws regulating on-premises consumption of liquor. Writing for the court in The License Cases (1847), Taney listed "excessive indulgence of intoxicating liquors" as "an evil" and upheld the power of state legislatures to "guard against it by wise and prudent legislation."

Taney himself was not much of a drinker, according to Maveety, owing to ill health for much of his life. Besides confronting precursors of the later temperance movement, the Taney Court also introduced the justices to the liability issues arising from drunken driving. The ruling in Stockton v. Bishop (1846) upheld a $6,500 jury award to a stagecoach passenger injured in a mishap blamed on the driver's intoxication.

A few years later, the court, in The Genoese Chief (1851), upheld federal court jurisdiction over a lawsuit arising from the collision of two river-going vessels blamed on a wheelsman "who may have been incapacitated by liquor."

Among chief justices, Maveety describes most as judges of good liquor, at least to some extent. Warren Burger, a longtime member of an international wine-tasting society, was rumored to have kept a well-stocked wine cellar in the basement of the Supreme Court building.

Burger's successors pale in comparison. Maveety reports William Rehnquist as partial to Miller Lite and John Roberts as conspicuously moderate: "just a glass of wine from time to time," according to her unnamed source.

Improbably, it fell to Edward White, a Louisiana Democrat described by Maveety as a connoisseur of good drink, to preside over the court in the run-up to the nation's ill-fated social experiment in Prohibition.

The court set the stage for Prohibition by rejecting, as late as 1890, any constitutional privilege to make or consume alcoholic beverages. With White as associate justice and later as chief justice, from 1910-1921, the court "affirmed all manner of anti-alcohol legislation."

With White's death, President Warren G. Harding appointed William Howard Taft, the former president and no friend of the temperance movement, to serve as chief justice during the Roaring '20s — what Maveety describes as an era of law, order, and bootlegging.

Taft "did not believe that liquor control could be sustained," Maveety reports.

Despite Taft's doubts, the court gave police a wide berth in enforcing Prohibition in a series of decisions that limited Fourth Amendment restrictions in automobile searches and raids on illegal distilleries and speakeasies.

Among other pro-law-enforcement decisions was one, later overturned, that allowed police to listen in on private telephone conversations without a warrant. The feds nabbed bootlegger Roy Olmstead by using a spike microphone to listen to him making business arrangements from his phone-booth office.

With public opinion turning against Prohibition, Taft's successor, Charles Evans Hughes, led the court in backing away somewhat from its pro-law-enforcement stance: "the lowly bootlegger," in Maveety's phrasing, as "civil libertarian patriot." With repeal of Prohibition in 1933, Hughes put an emphatic end to the era with his decision in United States v. Chambers (1934) that any still pending Volstead Act prosecutions "cannot be continued."

Despite repeal, the Twenty-First Amendment explicitly authorizes states to enact laws prohibiting the importation or use of alcoholic beverages within their borders. In that regard, Prohibition "normalized greater governmental regulation of alcohol than had ever existed before." And the court continues to shape and reshape Commerce Clause and Fourth Amendment jurisprudence in alcohol-related cases.

Among recent examples, the Roberts Court settled in Birchfield v. North Dakota (2016) on Fourth Amendment rules allowing police to administer a roadside breathalyzer test without a warrant but requiring a warrant before drawing a suspect's blood at the stationhouse or in the hospital.

What should we make of the court's recurrent mixing and stirring of alcohol-related cases? Maveety has a tentative answer. "What the justices say and do with respect to alcohol," she writes, "tells us something important about their times, our times, and our 'constitutional cocktail' of limited governmental powers and individual rights."