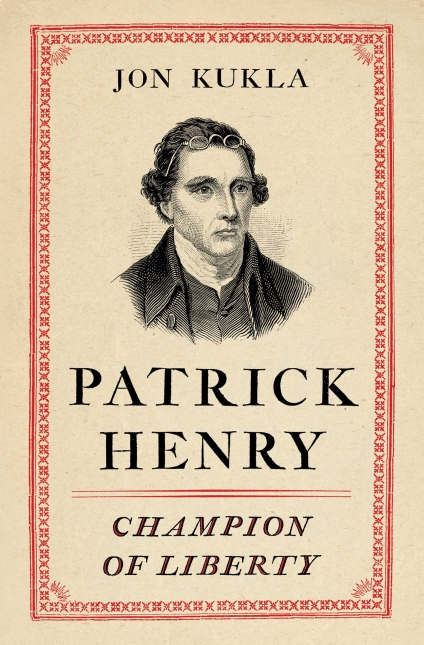 Patrick Henry has long needed a thorough biography. He had two in the 19th century, and only three more in the 20th. Jon Kukla, in Patrick Henry: Champion of Liberty, joins historian Thomas Kidd, who published in 2000, in presenting a modern account. Kukla knows his material and how to present it. Avoiding scholarly debate but drawing on it, he tells Henry’s fast-paced story and explores the problems his subject confronted.

Perhaps less self-regarding than his fellow revolutionary leaders, Henry did not save his papers. Unlike his fellows in the Virginia elite, he never developed an edifice complex. He moved frequently, and there is no Mount Vernon or Monticello to inscribe his life and self-conception upon the land. Instead, his Red Hill National Memorial centers on a plain, comfortable house —  where Henry did not dwell for long anyway — rather than on a great mansion.

So, what did Henry do with the chances that his time gave to him?

The familiar textbook answer is that he made speeches that counted. Newly elected to the Virginia House of Burgesses in 1765, he inflamed debate on the Stamp Act with a speech that so impugned the king as to raise cries of Treason! Reports across the colonies and even in Britain presented the resolutions that he offered against the Act in far stronger terms than the House actually accepted. But even in their milder form, his words helped bring Virginians into protests that might have been confined to Massachusetts, and perhaps just to Boston, and gave a stirring lead.

Most famously, Henry cried, “Give me liberty or give me death!” at Virginia’s Second Revolutionary Convention in March 1775, and Kukla shows how that happened. More illuminating, though, he follows Henry through Virginia’s revolutionary crisis as its political institutions disintegrated and war broke out.

Henry was no soldier, but he commanded troops. He became the Commonwealth’s first republican governor, an utter contrast to its final royal governor, the venal, authoritarian John Murray, Earl of Dunmore.

Despite their differences, both Dunmore and Henry confronted the shadowed heart of Virginians’ claims to liberty: their dependence on slavery. Responding in November 1775 to black offers of assistance, Dunmore decreed freedom to slaves “pertaining to rebels.”

Henry fully recognized slavery’s enormity. He said so repeatedly, in private. He never really made peace with it; late in life he still was discussing slavery with Quakers. But unlike Thomas Jefferson, he never went public on the matter. And unlike George Washington, he took no steps to free his slaves, and the slaves do not appear as historical actors in Kukla’s pages.

Henry faced Virginia’s other great internal lesion, the relationship of an established church and a free citizenry, more openly. Like slavery, this issue appeared throughout revolutionary America; unlike slavery, it found national resolution in the First Amendment and the absence of the word “God” in the Constitution’s text.

Kukla shows that the issue was under serious discussion among Virginians, and in Henry’s own mind. Persecution of Baptists and other evangelicals for how they worshipped appalled him. But he could not get past the concept of toleration, as opposed to difference existing and flourishing on its own terms. Colonial Virginia law had “established” the Church of England, and for Henry, something like that arrangement needed to continue. Thomas Jefferson and James Madison, both of whom came to despise Henry, saw better.

So did George Washington, who wrote to the Hebrew Congregation of Newport, Rhode Island, in 1791 that the issue was not toleration, one group putting up with another. It was equal rights based on law and respect. Toleration could be withdrawn; rights could not. As with the matter of slavery, Kukla shows Henry’s awareness of a problem larger than himself — and larger than his Virginia. But as with slavery, he never reached the resolution that others clearly saw.

Far more than Washington or even Jefferson, Henry remained Virginian to his core. Though he declared himself to be “an American” in 1775, he spent the whole Revolution in Virginia, working on its problems.

The liberty of the Commonwealth and of its people — his people — defined his view of the Revolution. He became a leading Anti-Federalist in 1788, deeply opposed to the proposed U.S. Constitution, arguing strongly against it in Virginia’s ratifying convention and arguing for much stronger amendments than the eventual Bill of Rights, all because he saw the Federalist project as a threat to Virginia.

In this, he opposed Washington, who leant his enormous reputation to making and implementing the Constitution. The future president could be fiercely hostile, even vindictive, toward people who had seemed friends but who crossed him, both during the war and later. He broke entirely with his neighbor and longtime associate, George Mason, over the Constitution. He also broke with Jefferson after their policy split within the first Cabinet. But Washington and Henry remained friends, and he even offered Henry a seat on the United States Supreme Court, which Henry declined.

Patrick Henry led an important life. In his own mind, the cause of liberty ran through it. Kukla shows what that meant to Henry: the liberty of white Virginians to run their own world. He shows that Henry saw, but could not resolve, the great and enduring issues that the Revolution raised in Virginia and throughout the emergent United States. He presents Henry’s life engagingly and he demonstrates that understanding Henry in his fullness means a better understanding of the Revolution.

Edward Countryman is University Distinguished Professor of History at Southern Methodist University and author, most recently, of Enjoy the Same Liberty: Black Americans and the Revolutionary Era. He is deep into writing Distinctive Nation: The Uncertain Colonial Order, an Ambiguous Revolution, and the Troubled American Republic for Farrar, Straus, and Giroux.

From a journalist and art historian, an accessible guide to understanding the man and the thinker behind The Prince.