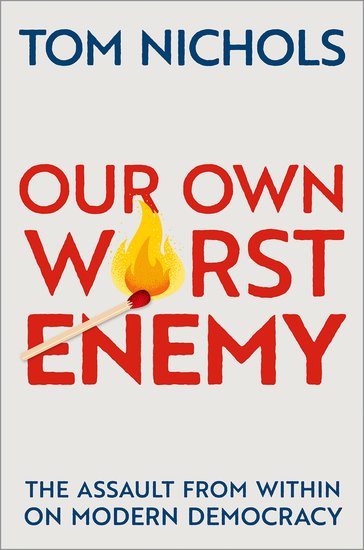 If you’re an American, you may be depressed, alarmed, or even outraged about the increasingly dire state of our democracy, but you shouldn’t be confused over who’s to blame for it. As Tom Nichols makes clear in Our Own Worst Enemy, we all are.

Part lament over what we’ve become — an unserious, childish electorate that wants its lollipop and wants it now — and part plea to stop the bleeding before it’s too late, this short, conversational book feels like a well-intentioned lecture from Dad to stand up straight, tuck in your shirt, and get a job for Chrissake.

By the end, I felt nothing but despair.

(Full disclosure: I follow Nichols on Twitter and have liked and shared many of his posts, so I’m not neutral on the author or his worldview. My endorsement of his cat-related tweets, however, betrays no bias; cats are objectively wonderful.)

A professor at the U.S. Naval War College and contributor to USA Today and the Atlantic, Nichols is also a former longtime Republican who left his party in disgust over its beatification of Donald Trump. Although crestfallen over what the GOP and, more broadly, America, has become, he claims to be hopeful for the future of liberal democracy both at home and around the globe.

“If I am certain of anything,” he writes in his preface, “it is that it is well within our power as citizens to return to a more civic and more confident democratic life, if we so choose.”

Alas, the 200 pages that follow — which take readers from ancient Athens and midcentury Italy to Orwell’s 1984 and Huxley’s Brave New World — suggest we’ve chosen otherwise. And that’s why the book is so distressing. It isn’t that Nichols, via his good humor and “moral hectoring,” doesn’t make a persuasive case for the importance of re-embracing our better angels. It’s that our better angels have already decided they’d rather just watch Netflix and chill. And then subtweet us.

Social media has altered the ways in which we interact with one another and experience life. Full stop. It’s a bullhorn through which we feel compelled to blast every once-lowkey opinion we ever held, be it about our favorite football team or conspiracy theory du jour. But rather than being drawn closer together by all this online-community building, we’ve been ripped apart.

Of the rapid cultural changes brought on by social media, Nichols writes:

“[It is here] the technology of connection is doing its worst work by destroying us as people. It is depriving ordinary citizens of a basic ability to pause, to deliberate, and to reason. The immediacy of the hyper-connected world is facilitating our devolution not just away from being thoughtful citizens but away from maturity and confidence, and away from the seriousness that makes life in a democracy possible. We entered the Information Age as adults; we are leaving it, and heading into the Hyper-connected Age, as children entranced by colorful pictures flashing in front of us while we jab at the ‘Like’ button.”

Gone are the days when We the People reliably behaved in a civic-minded fashion by, say, joining the Elks (like Nichols did), running for local office in service to our communities (as his mother did), or at a bare minimum soberly considering the realities around us and then making informed decisions at the ballot box.

Today, we’re a bunch of aggrieved, vindictive toddlers who grow surlier as our standard of living rockets skyward. Our nonsensical voting habits (e.g., Bernie Sanders supporters flipping to Trump in 2016) are absurd, and we seem motivated by nothing so much as wanting to stick it to our enemies, even at our own expense. Yeah, I could use Obamacare, but if it means the idiot across the street gets affordable insurance, too? Hell, no!

But are we truly different as a nation, or has social media merely revealed what was always there? Nichols warns against falling into the nostalgia trap — spawned in the 1970s and coinciding with the slowdown of America’s post-WWII economic dominance — especially as wielded by the populist right. “The good old days” is often racist or nativist shorthand for a kinder, gentler time before they lived next door to us.

Yet Nichols admits to yearning for the sort of decency his dying, bigoted father displayed when declaring, in the runup to the 2012 presidential election, that both Barack Obama and Mitt Romney were good men who’d make fine leaders. “This kind of equanimity was once normal in American life,” he writes.

True, it was (although people of color were surely on its receiving end less frequently than whites). But would it have been thus if people in an earlier era possessed the same cyber-cudgels we do? Would Archie Bunker be content to lob a sole zinger at Meathead and then go to bed? Or would he, if able, log on and rant for hours about his tree-hugging moron of a son-in-law, pumping up his own sense of supremacy while simultaneously feeding his disdain for hippies?

It’s impossible to know, but millions have discovered in the last decade that powering through Thanksgiving dinner with a racist grandpa is one thing; receiving daily “Stop the Steal” memes somehow forwarded from his Jitterbug is another. And, indeed, folks back in the day would nod amiably to a neighbor. But when, in 2021, that same neighbor shares “Plandemic” on your Facebook page and invites you to a mask-burning being keynoted by the MyPillow guy? Suddenly, equanimity feels out of reach.

Which is why the handful of remedies Nichols offers — and kudos to him for trying — feels out of reach, too. While compulsory national service is plausible, the idea that strengthening political parties or increasing the size of Congress (or number of states) would be enough to begin healing our schisms seems farfetched. Besides, we’d need competent adults willing to put partisanship aside to spearhead the effort.

Seen many of those lately?

One thing that might inch us toward a restored faith in government would be to eliminate the Electoral College and let a pure majority rule at the presidential level. (As it stands, the notion that “every vote counts” is as adorable as it is false.) But Nichols hints that this is among the “proposals that range from intemperate to hairbrained,” despite reiterating conservative commentator David Frum’s assertion that “elections now systematically disfavor voting majorities.”

Nichols acknowledges that, while Trump lost the popular vote (by 7+ million) in 2020, “if some forty or fifty thousand voters spread across just four or five American states changed their votes, Trump would still be leading the charge against liberal democracy from behind the Resolute Desk in the Oval Office.”

Instead, Joe Biden won. But when it came time to certify the results of that victory on Jan. 6th of this year, scores of delusional MAGA zealots — duped by the social-media-fueled “Big Lie” that the election was stolen — invaded the U.S. Capitol, smeared feces on its walls, and assaulted police officers in an attempt to restore their messiah to his throne.

Okay, maybe nixing the Electoral College is too facile a solution to this level of dysfunction (see “smeared feces,” above), but wouldn’t it be nice to have a rational debate about it anyway? Or at least a polite one? Perhaps, but it won’t happen on social media. The antidote to what’s poisoning us may lie in pulling the plug on our virtual Colosseum and shutting down its highspeed gladiator games. But no one genuinely wants to sever ties with that intoxicating, addictive world, least of all Nichols:

“At the end, I must admit to my own hypocrisy. I do not know that I have answers for any of [the problems plaguing liberal democracy], but if I do, I will probably announce them first on Twitter or Facebook.”

And when he does, thousands of us will dutifully “like” it. Then, narcissistic babies that we are, we’ll glance at our copy of the cogent, sensible Our Own Worst Enemy, hurry back online, and continue eviscerating our foes.

Then we’ll demand another lollipop.

Holly Smith is editor-in-chief of the Independent. Naturally, she hopes you’ll follow her on Twitter at @HSmithWrites.