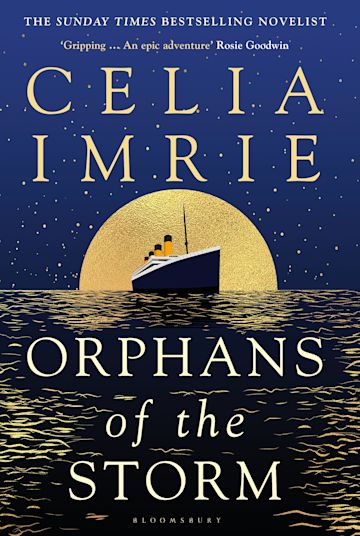 Celia Imrie is an award-winning British actress perhaps best known for her roles in “The Best Exotic Marigold Hotel,” “Nanny McPhee,” and “Mamma Mia!” She is also a talented writer, having penned an autobiography and three novels set in France, two of them bestsellers. With her latest book, Orphans of the Storm, she tries her hand at historical fiction, with mixed results.

Orphans illuminates the real-life tale of two French children rescued from the Titanic in April 1912. The boys were thought to be orphaned after their father, who’d claimed to be a widower, went down with the ship. We soon learn that he was traveling under a false name. As the story unfolds in two distinct parts, readers discover the real story of Michael Navratil and his estranged wife, Marcella.

The first half of this overlong novel focuses on beautiful 16-year-old Marcella Caretto, who meets Michael Navratil in Nice in 1907. An ambitious tailor with a shadowy past, Michael becomes Marcella’s sewing teacher and then her lover. He charms the naïve teenager into marrying him at 17 without her parents’ permission. Instead of fulfilling her lifelong dream to be a famous singer, Marcella finds herself a child bride.

She is soon pregnant and eventually has two sons, Michel Marcel (“Lolo”) and Edmond Roger (“Monmon”), whom she adores. Michael — jealous that the children have displaced him in her heart — rapidly turns into a cruel and controlling spouse. A textbook domestic abuser, the repulsive Michael demeans Marcella at every turn. Regrettably, his abuse is excessively detailed and fails to move the story forward.

By 21, Marcella’s greatest wish (and, perhaps, readers’) is for her to divorce her awful husband, gain custody of the kids, and start over. Quickly, however, Michael’s past crimes and financial issues catch up with him, and he resorts to kidnapping the boys. Intending to start his own new life with his sons, Michael purchases a fateful second-class ticket on the Titanic — but not until more than halfway through the book. This is where things finally get interesting.

Michael is now a fugitive traveling under the alias Louis Hoffman. His story — and his family’s — becomes intertwined with that of Margaret Bechstein Hays, a New York debutante sailing on the Titanic with friends. This young American is by far the most intriguing character in the novel. Wealthy and spoiled, she is also kind and charitable and yearns to do something to prove she’s more than a vapid socialite. She will get her chance aboard the doomed vessel. Unfortunately, we never get the opportunity to know Margaret fully as she is not part of the narrative long enough.

Imrie and her actress friend Fidelis Morgan collaborated on this book due to their mutual interest in the Titanic saga. In a fascinating coincidence, both women had relatives on the ship who survived the sinking. Imrie lives part time in Nice and does a wonderful job of describing the French city and its local culture. She also does a good job writing dialogue between her characters; her acting background serves her well here.

Still, the stage upon which she builds her novel is shaky. Orphans is lacking in historical context regarding world events of the period other than the Titanic disaster itself. The role of women during this era is not analyzed or explained, and the fictional Marcella lacks the depth of character the real-life Marcelle (Imrie changed her name) clearly possessed.

Imrie’s friend Morgan, a self-described “renowned bloodhound,” began to “snuffle out the bones of the story” via primary source research in the Nice archives. As a nonfiction writer who also loves to “snuffle” in archives, I found Morgan’s description of her investigation and the documents she tracked down to be the most fascinating part of the book.

Truth is not only stranger than fiction, it also often tells a far more compelling story. The same could be said of Orphans of the Storm — a mildly entertaining novel that could have, in the right hands, been a gripping work of narrative nonfiction.

Heath Hardage Lee’s narrative nonfiction book, The League of Wives: The Untold Story of the Women Who Took on the U.S. Government to Bring Their Husbands Home from Vietnam, was published by St. Martin’s Press in 2019. Her latest exhibition, developed for Senator Bob Dole and the Dole Institute of Politics, is entitled “The League of Wives: Vietnam POW MIA Advocates & Allies.” Reese Witherspoon’s production company, Hello Sunshine, and Sony 3000 have optioned The League of Wives for a feature film. Heath’s new book, coming in 2024 from St. Martin’s Press, is a biography of former first lady Pat Nixon.