A rich new fantasy series gets off to a captivating start. 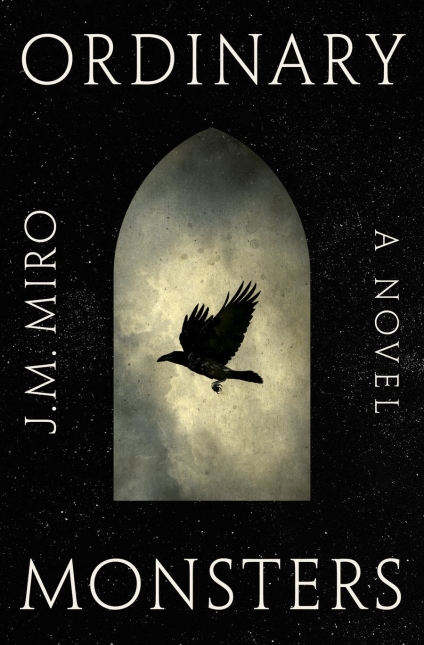 J.M. Miro’s Ordinary Monsters, the first novel in a new series, tells the tale of young students (dubbed “talents”) with magical abilities and the adults who both protect and betray them. It would be easy to dismiss the effort as a rip-off of Harry Potter, but the author isn’t aping the bestselling franchise. Instead, he weaves a compelling tale all his own.

Miro is the pseudonym of a novelist and poet from British Columbia whose identity appears to be shrouded in mystery. It’s clear, though, that he (and online research does point to Miro being a “he”) is a gifted writer. He has taken what could have been an otherworldly slog and instead created a universe of poetry mixed with thrills.

The talents on whom the book focuses boast a number of different skills. Ribs has the ability to turn invisible. Charlie can quickly heal from the gravest injury. And Komako is able to control dust and dirt and use them against her foes. Marlowe, however, has the most fascinating power of all: the ability to commune with the beastly glyphic, who guards the portal to the underworld. What is most wondrous about these talents is that, taken together, they reflect the deep-rooted feelings of loss and confusion known to young people everywhere. Miro could’ve lifted his cast from a child psychology textbook.

Unlike in J.K. Rowling’s series, adults figure heavily in the action here. Alice, a detective and true hero, is at the center of the narrative. She is the driving force who brings many of the children to Cairndale, the facility where talents are educated. Brynt, whom Marlowe reveres as a mother figure, serves as a moral compass and, in several instances, an actual savior.

Others at Cairndale include both simple teachers like Miss Davenshaw and truly sketchy characters like the facility’s leader, Dr. Berghast. The novel is broadened by the fact that the grownups aren’t just there to service exposition or to guide the children; they are fully formed, play critical roles, and are actors with agency.

Entrancing backstories and sufferings drive Ordinary Monsters. Marlowe, for one, has lost several parental figures; Komako has lost her sister; and even the villainous Jacob has lost his brother, a tragedy that ignites his own cycle of wrongdoing. Part of why the novel works is that these characters are fleshed out and have robust identities. Readers will care about them.

The other winning element is that the story hinges so thoroughly on the ambiguous nature of good and evil. Is Dr. Berghast evil for wanting to control the portal to death or good for working to protect the talents from it? Is Jacob evil for using his powers to subdue the children or good for seeking to inoculate them against things more horrible than he? Is the glyphic who guards the portal a force for good or merely enslaved by its role?

The pleasure of untangling these philosophical conundrums aside, Ordinary Monsters is strongest when the author focuses on the adventurous aspects of the plot. The battles he depicts, the conflicts he conjures, and the quests he unspools all make the novel propulsive despite its considerable length.

To that end, if there’s a weakness, it’s the book’s page count and overly large cast. Often, there are simply too many threads, challenges, and locations to keep track of, and the nonlinear timeline doesn’t help. A kid on summer break might be better able than a distracted adult to give the story the hours and attention it requires, but anyone who makes the effort will be rewarded. The world created by J.M. Miro is sure to enrapture and engage.