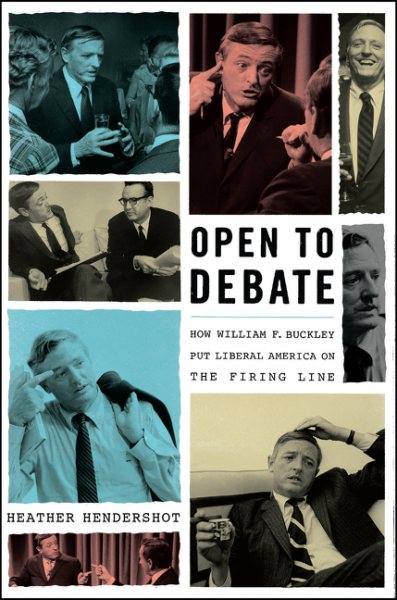 William F. Buckley could verbally eviscerate you at dinner, then pour you a cocktail while telling a funny story in the cigar lounge later that evening. He had his warts, he had his flaws, and, if you are anything approaching a Democrat, he had more than his share of distasteful ideas.

Still, he was usually able to separate his politics from his friendships, and that’s to be admired —especially in today’s toxic political environment. Buckley wanted to educate, to win you over. The prospect of skewering you was more of a dessert item he would often leave untouched on his plate.

For this book, author Heather Hendershot watched hundreds of hours of tapes of Buckley’s influential television program, “Firing Line,” with a keen eye. The show ran from 1966 to 1999 and was a bedrock of the intellectual side of the conservative movement. (Back in the days when it had one, that is.)

What Buckley would have made of Donald Trump’s vacuous statements is anyone’s guess, though it’s hard to imagine him standing with a man who suggests making Mexico pay for a wall that would have to stretch nearly 2,000 miles through unforgiving terrain, urban areas, and wide swaths of private land. Details are for losers.

Unlike Trump, Buckley generally kept insults — or what he would consider cheap shots — out of his debate toolbox. One notable exception where emotions got the better of him was a 1965 debate with author James Baldwin about race in America.

As she does in many other places in this interesting work, Hendershot tells the story in an energetic way without becoming flippant. For example, when Buckley accuses Baldwin of adopting a fake British accent to woo over the Oxford University crowd, she notes that the latter’s eyes “widened in disbelief…and the crowd loudly guffawed.”

It’s odd, however, that she would neglect to do the same with Buckley’s most notorious moment of losing his cool in debate: battling with Gore Vidal as part of ABC’s coverage of the 1968 Republican and Democratic conventions. During the most famous exchange, Vidal calls Buckley a “crypto-Nazi,” and Buckley retorts by calling Vidal a “queer” who he was going to “plaster” if his liberal counterpart kept it up.

Leaving Vidal out of this book is akin to writing a biography of Alexander Hamilton where the only reference to Aaron Burr is an aside that both men sometimes tried legal cases in the same New York City courthouse.

Certainly, the infamous debate has garnered a fair bit of attention recently — including an excellent documentary — and Hendershot might have felt it was already well-plowed ground. Still, it’s an odd omission in a book devoted to the debating life of Buckley.

Vidal was never actually on “Firing Line,” and perhaps that’s her rationale. However, many others, such as liberal lion and Buckley friend John Kenneth Galbraith, figure prominently in Open to Debate, even when outside the confines of the show’s notoriously bare and cheap set. Heck, Steve Allen gets ink both on the cover and in the text. Clearly, the bar to book entry wasn’t that high.

Elsewhere, the book is excellent in telling the tale of Buckley’s quixotic run for mayor of New York City. Well before The Donald was The Donald, Buckley ran in part to raise awareness of his brand of conservatism. He knew he was playing a game. Asked what he would do if he was elected, he said he’d demand a recount.

Hendershot also does a fine job giving us a full picture of Buckley as an eloquent and effective voice for conservatism as it staggered out of Barry Goldwater’s crushing defeat at the hands of Lyndon Johnson in 1964. More importantly, she does not let Buckley’s veneer cover up some of his more reprehensible opinions. Examples abound, so I’ll select just one: In 1986, he suggested that anyone infected with HIV should be tattooed with warnings on one forearm and one buttock.

Underneath that layer of intimidating intelligence and wit, other maggots of opinion were squirming and waiting their turn. It’s to Hendershot’s credit that she allows us to enjoy the Oscar Wilde side of a towering figure while never letting us forget that, even when served with aplomb and a smile, cruel ideas remain cruel ideas.

Michael Causey, a past president of Washington Independent Writers, was a less-than-mediocre member of the Walt Whitman High School debate team. They ultimately parted amicably.