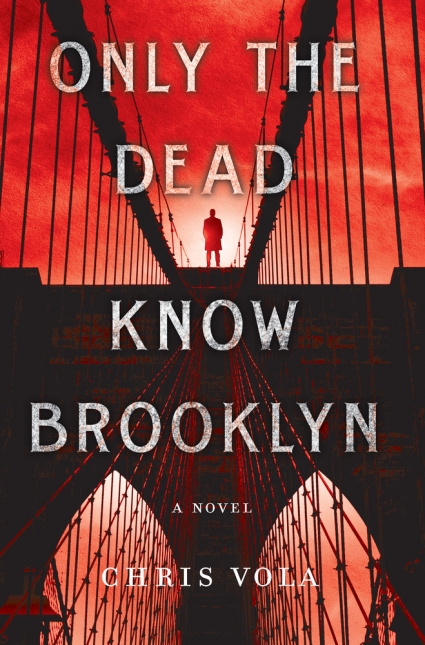 I’ve been looking for another reader-friendly vampire story ever since I came across Susan Hubbard’s The Season of Risks, the third installment of her Ethical Vampire series seven years ago.

Assessing that YA novel, I wrote about “the special appeal of the vampire craze to young adults. Who feels more like an outsider than a thoughtful teenager? Who feels more unsettled than someone going through a sequence of identity adjustments?”

Chris Vola’s Only the Dead Know Brooklyn, aimed at a somewhat older audience than Hubbard’s, has many virtues. His descriptions of vampire hunger, physical and weaponized battles, degrees of pain, supernatural healing, secret hiding places, and Brooklyn and Manhattan neighborhoods are memorable (though I wish they weren’t).

Ultimately, however, the novel is not reader-friendly. This is too bad, because Vola has an amazing eye for detail, a dazzling imagination, and a provocative premise.

Vola plumbs the scales of curiosity, motivation, and satisfaction as he contrasts vampire immortals with mere mortals who wittingly or unwittingly come into relationships with the vampires, usually as donors.

He imagines vampire viruses that circumscribe the geographical range of vampire existence. Members of the Brooklyn tribe, like 128-year-old central character Ryan Driggs, can only thrive (if that’s what vampires do) in Brooklyn.

Before he was “turned” into a vampire, Ryan was dying of lung cancer. If he returns to human mortality, he returns to that fatal condition.

Vola also imagines an ongoing war between the Brooklyn tribe and the Manhattan tribe, a war in which Ryan’s human girlfriend, Jennifer, is kidnapped. Ryan’s search for Jennifer, and for his ultimate identity and destiny, leads him to taking extreme risks, crossing borders of all kinds.

The author provides a large cast of supporting characters. Betrayal is such a major theme in this book that it is often hard for Ryan, let alone the reader, to know whom to trust. The most intriguing female character is Nicki, at once alluring and lethal. Paling in comparison are Vanessa, Arianna, Natalia, and Fiona — a bland quartet of sonically matched walk-ons.

The characters seem stuck in a kind of prolonged adolescence, whether they are immortals or donors. Even a willingness to sacrifice for others comes across with less force than one might expect. With respect to the immortals, perhaps the possibility of eternal life makes growing up irrelevant.

Enriching the paranormal flavor of Only the Dead Know Brooklyn is the quest for eight artifacts endowed with devastating energy. These statues, bearing jaguar iconography, are valued as the keys to dominance. Vola provides rich passages evoking that power and the thrill of using it.

The eternals are involved in various kinds of collusion with government officials and criminals bound in unsteady and unholy alliances based on…I’m not sure what. Let’s say the desire for power.

Once again, I just don’t care. That’s the problem.

For all his skill, perhaps because of it, Chris Vola overwrites. His descriptions and explanations go on too long, losing focus and solidity as they expand. While much of the novel’s dialogue has force, it is too obviously exposition in disguise.

Here’s my problem. I sense an enormous talent here. I admire Vola’s ambition and his vision. I just can’t find my way into a reading experience that holds my interest and propels me forward. Of course I read the entire book, but I rarely found myself wishing to turn the page or enter the next chapter. Over and over, I felt myself being pushed out.

I sincerely hope that Chris Vola’s other readers enjoy a different kind of experience. It could be that I am simply the wrong reader for this book. But maybe not.