One of Us: The Story of Anders Breivik and the Massacre in Norway 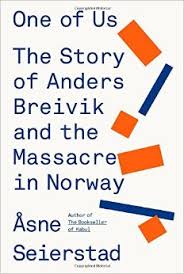 Åsne Seierstad’s One of Us: The Story of Anders Breivik and the Massacre in Norway, is a book that in many ways defies genre. Or, if not defies, then perhaps challenges or even redefines it.

The 524 pages read, at times, like a crime novel, but Seierstad is a journalist first, and she has done extensive research in compiling the facts that become the story of the unthinkable tragedy — a bombing and mass shooting that left 77 dead — that occurred in Oslo and on the island of Utøya on July 22, 2011. From these facts, she has woven a tapestry of lives — strands of stories forever connected by a single day.

There are elements in One of Us that feel like creative nonfiction, with such careful attention on the part of the author to literary craft. Seierstad documents real people and events in an accurate way while paying close attention to language, to writing compelling and vivid prose. As she chronicles the harrowing details of that fateful day, she writes, “Over harebells and yellow bird’s-foot trefoil, over heather and wild strawberries. They ran until they reached Lover’s Path.”

It is difficult to consider this kind of beauty in the midst of such madness. But it is this lyrical language juxtaposed beside a litany of cold, hard facts that so often makes Seierstad’s writing almost unbearable in its reality, reaching up off the page, firmly grabbing hold of the reader. There is nothing else to feel but compassion and empathy.

In the middle of the dark days of Breivik’s trial, Seierstad writes, “The rays of the early morning sun created haloes round the journalists in the security queue.” Light in darkness. Beauty in the midst of madness. Courage in the face of death. Hope in tragedy.

This is what sets One of Us apart from other journalists’ accounts. While Seierstad may have started out intending to write an article for Newsweek, not only did her word count increase exponentially, but her telling of this story became more about bearing witness than reporting facts.

“Everything in this book is based on testimony. All the scenes are constructed according to witness accounts,” Seierstad writes in her author’s note. It is the careful construction of these scenes, the actual dialogue and the gestures of those speaking that gives this book the distinction of narrative prose over reportage.

At times, information that seems fitting for a coroner’s report is transformed into part of the story. “The bullet in his head had splintered into little bits that were now embedded in his brain tissue. One bit had stopped just millimeters short of his brain stem.”

We are spared none of the details. Seierstad is our omniscient narrator, hovering somewhere very close to the chaos and right there, too, inside the minds of the victims and the killer.

“In a number of places in the book I refer to the perpetrator’s thoughts or judgments,” she writes in the epilogue. “Readers might want to know: How does the author know this? “Everything is taken from what he himself said in police interviews, at the trial or to the psychiatrists.”

That epilogue alone is worthy of close study. In it, she gives readers an inside look at her own journey through the process of writing this book. She explains. She provides examples. She teaches us something about what it’s like to be a journalist, what it’s like to research and recount an act of violent extremism and its myriad repercussions.

Kristina Moriconi is a poet and essayist. She received her MFA in creative writing from Pacific Lutheran University’s Rainier Writing Workshop in Tacoma, Washington. Her work has appeared most recently in Fox Chase Review, Under the Sun, and Crab Creek Review. She is the author of a chapbook, No Such Place (Finishing Line Press, 2013), and was the 2014 Montgomery County, Pennsylvania, poet laureate.

A sister strives to correct her brother’s story, but finds you can never define the whole truth for someone.