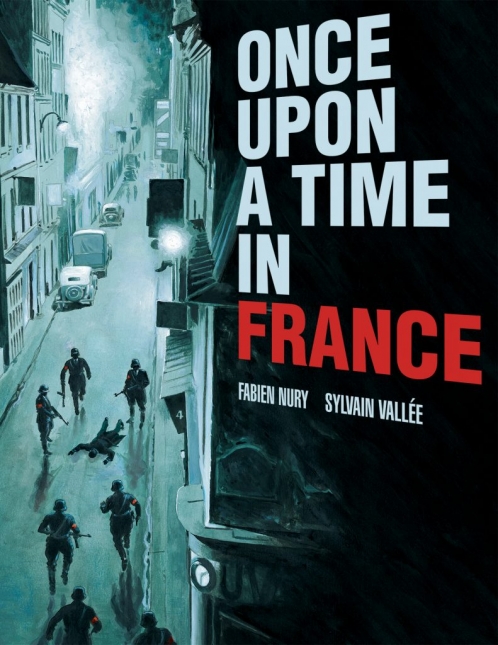 In a time of war, how should a person’s actions be judged? If that person seeks to do more than survive, if he seeks to get a few steps ahead, to gain economic and social power — at what point does it cross over into greed or exploitation?

Such questions were central to Min Jin Lee’s Pachinko, about a multigenerational Korean family living in Japan across the World War years, as well as to the story of industrialist Oskar Schindler, who saved more than a thousand Jews by putting them to work in his Krakow ammunition factory.

Such questions prove equally critical to Fabien Nury’s Once Upon a Time in France. The book is a morally grey graphic novel that straps the emotionally raw, historically nuanced weight of Pachinko to a sort of “will he, won’t he” gallows humor reminiscent of the film “Catch Me If You Can.”

Based on real-life Romanian Jew Joseph Joanavici, the story moves back and forth between the breakout of World War II and the moral reckoning that takes place in its aftermath. Legentil, the “little judge from Melun,” is the Hanratty to Joanavici’s Abagnale — or, perhaps better, given the French setting, the Javert to his Jean Valjean.

Was Joseph a good man or an evil one? Should we admire him or feel disgusted by him? Joanavici, in the eyes of some, is nothing but a war profiteer whose crimes will catch up to him.

“Judge him?…We will judge him as soon as this country has a justice system worthy of the name,” one man claims. And so they do, but only after they use his skills and his network of resources to win the war. That’s the tenor of Joseph’s story in the present, told in tandem with his struggle to survive as an immigrant to France fleeing the Romanian pogroms of the early 1900s.

Joanavici’s story is well-anchored by dramatic images and terse dialogue. With artwork that mimics a classic noir style, its nostalgic vibe suits its subject matter. Some readers may find the large format of the omnibus edition unwieldy, but the ease of reading makes up for it. World War II buffs in particular will love the wealth of historical detail in Joanavici’s dizzying web of give-and-take as he plays both sides in the name of survival.

Once Upon a Time in France is direct in its portrayal of the violence from the era depicted. The jarring prologue — with two beheadings in two pages — was so off-putting that I set the book down upon first looking at it, and had to steel myself before picking it up again. Such violence continues throughout, including a rape scene that leaves readers in no doubt of the victim’s experience of powerlessness and suffering.

Yet perhaps this is to be expected. How does one tell an honest WWII tale while flinching from its realities? And, in this story, it is, after all, the unreported rape of one woman and uninvestigated death of another that set up the parallel arcs of Legentil and Joanavici.

There’s an inherent limitation to that kind of narrative choice, however. This isn’t a story that will threaten traditional perceptions of gender roles and norms in the WWII era, and perhaps in that way, the story adheres too closely to its classic genre.

Nevertheless, the women are sympathetic and complex within their predictable roles as moral observers and moral catalysts for the men. Joanavici’s wife, Eva, in particular, is a powerful figure whose voice haunts him to the very end.

When I am confronted with a new book about an era that feels interrogated-down-to-the-bones by existing literature, I generally hope for some fresh insight into that historical moment. I think we all wonder what stories have been left out or overlooked, which was why Pachinko made such an enormous impact when it came out in 2017, praised as a “forgotten history.” Does Once Upon a Time in France accomplish similar goals?

Yes, I think it does, though modestly so. Most readers will know enough about the French Resistance and the struggles of immigrant Jews across Europe to feel a familiar rhythm to the story here.

Yet it pushes past that rhythm with a reminder that the pain of immigrants is rarely taken as seriously as it should be. This book reminds us that immigrants’ pluck and creativity in seeking survival should not be grossly caricatured as “slyness” or “criminality” — an ugly refrain for diaspora communities everywhere.

The real edge here is the push-and-pull of Legentil’s soft power as a judge against Joanavici’s equally soft power as a businessman. Their power is contextual, not absolute. Neither can fully rein in the physical violence that surrounds their choices; they are nearly always observers and secondhand victims of it. But, in the end, I felt more for their wives than for them.

Cassandra Farrin is an author, editor, and intercultural educator shortlisted for the Bath Children’s Novel Award in 2018. Her poetry and essays can be found in Frontier Poetry, Cirque, concīs, the Ploughshares blog, and elsewhere.

The Fifth Letter: A Novel