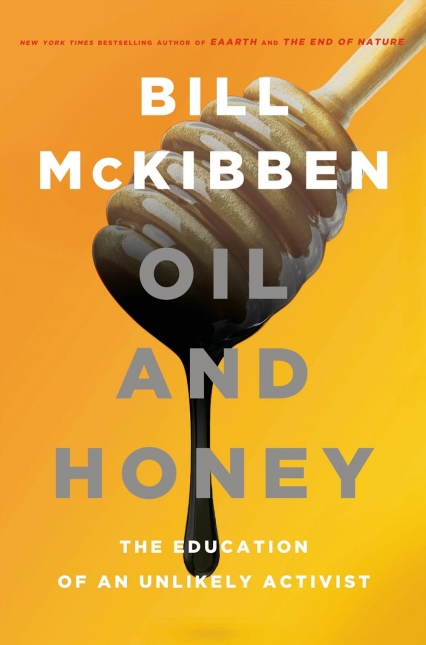 Writer, climate change activist, speaker and professor Bill McKibben has written and taught about our planet’s warming for a quarter century. McKibben cofounded 350.org, an environmental organization whose global grassroots movement aims to minimize climate change by reducing the amount of carbon dioxide in our atmosphere to less than 350 parts per million (it’s currently about 400 ppm). In his latest nonfiction book, Oil and Honey: The Education of an Unlikely Activist, McKibben chronicles his experiences over the last two years helping lead a movement to block the Keystone XL Pipeline and bring climate change to the global agenda.

At the forefront of climate change protests, McKibben proves a thoughtful expert. As he struggles to make government leaders understand the monumental risk of building the Keystone XL Pipeline — a proposed 1,500-mile pipeline linking the tar sands of western Canada to the Gulf of Mexico that could pipe some 830,000 barrels of oil into the U.S. each day — we gain a behind-the-scenes glimpse into the world of decision making and environmental politics. Throughout the book, we see McKibben and his 350.org colleagues work tirelessly, often traveling for months on end, to share their message of how the pipeline and climate change apathy threatens life as we know it. If there’s any chance of returning to a stable climate, climatologist Jim Hansen tells McKibben, “fossil fuels, such as tar sands, must be left in the ground. … If the tar sands are thrown into the mix it is essentially game over.”

At the same time, McKibben balances his highly scheduled life as a grassroots organizer and movement leader with an alternate universe: that of Vermont beekeeper Kirk Webster. McKibben helped Kirk finance a farm for beekeeping, and throughout much of the book he describes Kirk’s unique approach to beekeeping and farm life — chemical free, small scale — and how this type of local food production could change our dysfunctional food system. He compares this small-scale farming approach to the wealth, excesses and global power of the oil and fossil fuel industries.

He connects beekeeping and bees with the climate change movement in many ways. For example, he describes the fascinating “consensual democracy” by which bee colonies decide where to swarm; in the same way, our global society is trying to figure out how to slow the Earth’s warming and in which direction to move. In another parallel, McKibben likens organizing activists as a kind of pollination, wherein his speeches and interviews attempt to get people engaged in climate change protest.

McKibben explains his frustration with the lack of concern about our warming planet and outrage at the consideration of the Keystone XL Pipeline. When he decides at the beginning of the book to help organize the first major civil disobedience action for the climate movement, he writes, “I sensed … that people were ready for a deeper challenge — it was time to stop changing lightbulbs and start changing systems.”

So he, along with 350.org, organized a spring 2011 protest in front of the White House, intending to get arrested. He and others spent a weekend in jail — more than he bargained for — but in the end, with more than 1,200 arrests, succeeded in drawing attention to the Keystone XL Pipeline issue. Afterward, he and other organizers continued to try to reach policymakers and officials, but were faced with the slow inertia of our political reality.

By mid-book, however, we see McKibben realizing that going through the political system hadn’t worked, since, as he points out, environmental groups are no match for Big Oil’s highly paid lobbyists and rich political influence. He and the 350.org team decide instead that they need to go after the oil industry itself, and begin a new campaign to convince universities to stop investing in oil companies through their financial portfolios.

McKibben’s book reads like a memoir as he takes us through his experiences, trials and successes of the past two years. McKibben conveys his energy and passion for slowing climate change, and often finds the humor or lightness in a situation. (When he and other activists surround the White House holding hands, he writes, “Depending on your militancy level, we said we were either putting Obama under house arrest, or giving him an O-shaped hug.”) His writing is immediately familiar and accessible, and readers will feel at ease as he explains the intricacies of the complicated climate issue. His tome is filled with references to recent catastrophic weather events we can all remember — Hurricanes Irene and Sandy, the wildfires across the country, the record-setting heat in 2012. (In fact, he points out, there were 2,132 new high-temperature marks in June 2012.)

Science has shown the scary truth about our atmosphere. It’s generally accepted that a mere two degrees Celsius rise in global temperature would change our global environment in significant ways. McKibben writes “so far, we’ve raised the temperature of the planet just 0.8 degrees, and that’s caused far more damage than any scientist expected: half of the summer sea ice in the Arctic is gone, and the oceans are 30 percent more acidic.“Scientists have figured out what would create that two-degree rise: burning 565 gigatons of fossil fuels. Fossil fuel companies already have nearly 2,800 gigatons — five times as much oil coal, and gas — on their books, according to McKibben.

Throughout Oil and Honey, we see a change in McKibben himself; he begins the book seemingly uncomfortable in his role as leader and spokesperson, but he ends the book with newfound confidence in his role as a natural leader in a global fight, “going from writer to global educator to unlikely and somewhat reluctant activist,” he writes. “I didn’t particularly want to lead a movement, but I wanted to join one, and so I’d helped to build it.” We see the demands of a jam-packed schedule of a national tour to make speeches and lead rallies; in contrast, we also see him energized and reinvigorated during his time spent with Kirk tending to bees in scenic Vermont. McKibben is a humble yet determined leader. As the climate change movement gains momentum and footing, we see the small victories and tragedies of a man on the frontlines.

Readers will find an underlying urgency in McKibben’s message as he paints a vibrant picture of what’s at stake. In addition, readers who delve into his story will gain a better understanding of this global issue that will affect each of us in some way — as well as what it means to be a true leader.

Carrie Madren is a freelance journalist based in Northern Virginia (www.carriemadren.com).

A public policy expert argues for giving athletics the same respect as any university department.