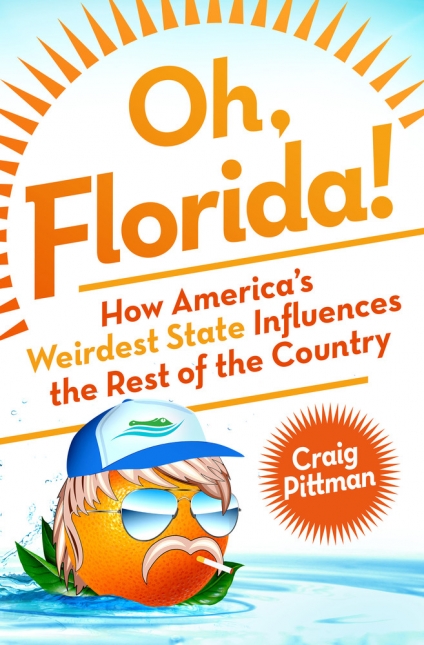 It seems likely that Florida will again be pivotal in the upcoming presidential election. That is not a comforting thought, no matter what your political persuasion.

After all, Florida voters have elected a two-term governor, Rick Scott, who, in his campaign, stressed his business acumen after his former company, Columbia/HCA, was fined $1.7 billion for Medicare fraud. He said he had no idea his underlings were stealing. Scott, who was briefly mentioned as a running mate for Donald Trump, spent $75 million of his own money getting elected the first time. His initial campaign ad accused Democrats of trying to cut Medicare.

All this and much more of the Sunshine State’s moral confusion and nuttiness is on display in Craig Pittman’s Oh, Florida! How America’s Weirdest State Influences the Rest of the Country. (By the way, as Pittman notes, “Sunshine State” may be a misnomer. Some of Florida’s cities get more rainfall than Seattle. In South Florida, you can set your clock by the afternoon gully-washers. The state also ranks as the lightning capital of the U.S. and is fourth, after Texas, Kansas, and Oklahoma, in the number of tornadoes. And hurricanes? Fuggedaboutit!)

Perhaps no one knows Florida shenanigans better than Pittman, who was born there. A former journalist and current blogger known for his muckraking coverage of the state’s environmental conflicts, his earlier books include Paving Paradise: Florida's Vanishing Wetlands and the Failure of No Net Loss (with Matthew Waite); Manatee Insanity: Inside the War Over Florida's Most Famous Endangered Species; and The Scent of Scandal: Greed, Betrayal, and the World's Most Beautiful Orchids.

Pittman’s latest tome is not an environmental screed. It is a comprehensive and historical — not to mention hysterical — compilation of Florida’s weirdness. No less an authority than Carl Hiaasen, whose bestselling novels feature characters modeled after some of the state’s larger-than-life ne’er-do-wells, believes Oh, Florida! “should be required reading for anyone who's ever thought about moving down here, with or without a concealed weapons permit."

(To give you some idea of that quirkiness, in Oh, Florida!, Rick Scott doesn’t come off badly when compared to earlier governors, whose venality has, on occasion, shocked even the United States Senate.)

The police in Florida have gotten their share of criticism, and Pittman does not give them a slide. He details incidents of brutality against minorities that defy belief. So does the inevitable acquittals of cops by all-white juries. But he also points out that Florida cops often have their hands full. How about the DUI suspect who was “wearing zombie contacts” while “dressed as a pig in a nude colored bathing suit”? In one report, the officer wrote: “I had the defendant secure the squirrel and then exit the vehicle.” That suspect claimed “he was the director of the CIA.”

Pittman provides scores of similar knee-slapping stories. But I bet the cops would find them funnier if fewer people were packing. Florida is NRA heaven. I myself am not anti-gun, per se, although the proliferation of weapons is nerve-wracking in a state that, as quoted by Pittman, can generate the following news lede: “A night of drinking resulted in a wild ride, sex behind the wheel, a gun to the head, a crash and a 26-year-old Port Charlotte woman under arrest.”

It is impossible to go into all the Pittman stories about alligators; Burmese pythons (so big they eat alligators); Native-American casinos; Miami and Meyer Lansky; frozen iguanas falling out of trees; potholes that swallow people; the Villages (the largest retirement community in America, where STDs are rampant); giant African land snails; land swindles; hanging chads; the ravaged Everglades; rising sea levels; runaway llamas tasered by police; shark attacks; Rush Limbaugh; the National Enquirer; machete crimes; and a hundred other head-shakers.

Of course, there’s another Florida that Pittman alludes to, albeit far too briefly. There is the climate, which much of the time is glorious. There are the beaches, some of the best in the world. There are tourist attractions (not all of which are cheesy) and national treasures. Think Disney World. Think fantastic resorts. Think the Keys. Think Cape Canaveral. Think fishing and golf. Think wildlife, some of which is unique in the world (I have been on a Gulf beach where the dolphins and manatees are close enough to touch). Think spring training!

You could argue that much of Florida’s wackiness is not homegrown. Other than the Calusas, Miccosukee, Timucua, and other Native-American tribes (and maybe early Spanish settlers), most Floridians moved here from other states. Perhaps their influence is the real problem.

It’s fair to say that Pittman does not give a balanced portrait of Florida. How could he? He is jaded, not surprising after a career uncovering scandal after scandal. He pines for the Florida he remembers as a child. I found it very sad. Florida, which I have come to like a great deal, offers myriad pleasures. I think it will be missed if, as Pittman and others predict, it eventually sinks into the Atlantic and the Gulf of Mexico under rising tides.

Lawrence De Maria, a former New York Times Pulitzer-nominated reporter, is a reviewer and columnist for the Washington Independent Review of Books. He recently released his 15th thriller on Amazon.com. He lives in Naples, FL; his only real problems with the state are the distractions it provides when he’s trying to write.