The underappreciated songwriter’s praises are finally being sung. 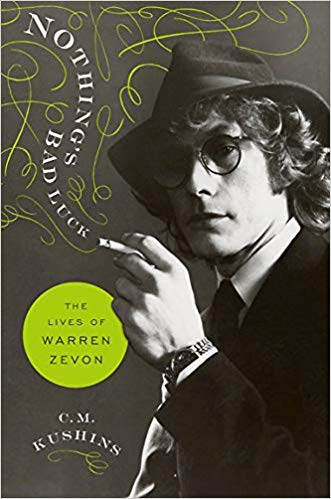 It’s been nearly 16 years since Warren Zevon died. The time may now be right for renewed appreciation of the work of this troubled and undeservedly overlooked songwriter and musician.

Nothing’s Bad Luck: The Lives of Warren Zevon is the third full-length book about Zevon to appear in the past four years. George Plasketes’ Warren Zevon: Desperado of Los Angeles tries too hard to match Zevon’s gonzo attitude, while James Campion’s Accidentally Like a Martyr: The Tortured Art of Warren Zevon is a scholarly examination of Zevon’s songwriting. Not to mention Crystal Zevon’s I’ll Sleep When I’m Dead: The Dirty Life and Times of Warren Zevon, part memoir from his ex-wife, part reminiscences from family and friends.

So, then, C.M. Kushins’ new volume is the first traditional biography of one of rock ‘n’ roll’s finest songwriters. Kushins is a journalist and musician performing under the name Muckiness Child. Nothing’s Bad Luck is his first book, and he has written a sympathetic but unflinching portrait of Zevon.

His musical background enables him to write about Zevon’s art with authority and insight. But he does not spare the reader from the unpleasant aspects of Zevon’s alcohol- and drug-fueled behavior that placed tremendous strains on his relationships, many of which did not survive the assault.

Zevon’s penchant for “song noir” (dark and violent songs such as “Lawyers, Guns and Money” and “Roland the Headless Thompson Gunner”) was inspired by his love of the great trinity of hardboiled writers — Dashiell Hammett, Raymond Chandler, and especially Ken Millar (aka Ross Macdonald) — and by the legacy of his gangster father, William “Stumpy” Zevon, who served as best man at mobster Mickey Cohen’s wedding.

Zevon showed an aptitude for music, especially composition, at an early age. One of his teachers arranged a visit to the home of Igor Stravinsky, who was conducting a session with Robert Craft. The two classical composers were sufficiently impressed with the 13-year-old Zevon to encourage him to continue with his classical education. Zevon, who, by this time, had developed a passion for rock ‘n’ roll, rededicated himself to classical composition and theory, an effort that would be reflected in his work a decade later.

The other major preoccupation for the adolescent Zevon was alcohol. He took to it with as much enthusiasm as he did music. Research tell us that the earlier one begins using substances, the more likely one is to develop a substance-use disorder. Zevon was a classic example; his addictions dominated his life until he achieved lasting recovery in the mid-1980s.

Kushins is unsparing in his detailing of the many instances of Zevon’s excesses. His behavior eventually led to his abandonment by lovers and distancing by friends, including Jackson Browne, who was instrumental in getting Zevon a contract with Asylum Records.

There were several attempts to encourage Zevon to seek treatment, the most dramatic of which was an intervention led by Crystal Zevon and Browne. Zevon underwent the treatment but soon relapsed and eventually broke off contact with most of those who’d sought to help him.

Zevon’s career was rooted in the Southern California music scene. He got his start with White Whale records, where he was introduced to legendary producer Dayton “Bones” Howe, purveyor of “Sunshine Pop” from such bands as the Turtles, the Association, and the Fifth Dimension.

Through Howe, he met Howie Kaylan and Mark Volman of the Turtles, who picked one of Zevon’s songs for the B-side of their mega-hit, “Happy Together.” After a short career at the label, Howe helped Zevon get a contract with Liberty Records, which released Zevon’s first solo album, the uninspired “Wanted Dead or Alive.”

In the early 70s, Zevon was hired as the musical director for the Everly Brothers’ touring band. This period proved to be an invaluable learning experience, and also resulted in a lifelong personal and professional relationship with then-unknown guitarist Waddy Wachtel, who would become one of the most in-demand session players for the next 30 years. Zevon was on stage with the Everly Brothers in July 1973 when they dramatically called it quits mid-song, breaking up the act for more than a decade.

During this time, Zevon continued to write songs. They eventually came to the attention of Browne — who was at the forefront of the second wave of Southern California’s dominance of popular music — and, soon after, the Eagles, Linda Ronstadt, and the Lindsey Buckingham/Stevie Nicks version of Fleetwood Mac.

Nearly all the members of the Eagles and Fleetwood Mac would appear on Zevon’s records, and Ronstadt covered his songs, most memorably “Poor Poor Pitiful Me” and “Hasten Down the Wind,” the latter of which served as the title song for her seventh album.

But, with the exception of his one bona-fide top-40 hit, “Werewolves of London,” Zevon never made much of an impact on the charts. After “Wanted Dead or Alive,” he made 11 studio albums, most of which did not chart. Yet, there is not a dud on any of them.

He went through three labels before finishing his career at Artemis Records. He got little touring support, oftentimes performing as a solo act. Things reached a nadir when Virgin sent him on a tour of Europe that consisted of lip-synching on television shows. Yet, he continued to make superb albums filled with hook-laden tunes and finely honed lyrics.

Many of Zevon’s songs dealt with mortality, often in the most morbid of ways. None was more prescient than “My Shit’s Fucked Up” from the album “Life’ll Kill You”:

Well, I went to the doctor
I said, “I’m feeling kind of rough”
He said, “I’ll break it to you, son
Your shit’s fucked up.”

Two years later, after performing at a festival in Canada, Zevon found he was short of breath. He complained to his dentist — a close friend — who insisted he see a cardiologist immediately. The doctor found nothing wrong with his heart but suspected something more serious. It turned out to be a rare form of lung cancer.

He was given only months to live. Instead, he survived more than a year, time he used to record one final album. Its last song is the deeply felt “Keep Me in Your Heart,” written for his son, Jordan, and daughter, Ariel:

When you get up in the morning and you see that crazy sun
Keep me in your heart for awhile.

At Pearl Jam’s 2017 Rock & Roll Hall of Fame induction ceremony, David Letterman, whom Zevon credited as “the best friend my music ever had,” concluded his remarks with, “One day, I hope to come back here for the induction for my friend Warren Zevon.”

It can’t happen too soon, and Kushins’ biography should help.

Terry Zobeck is a substance-abuse policy analyst with the federal government. In his off hours, he is an avid book and music collector.

The Rumble in the Jungle: Muhammad Ali & George Foreman on the Global Stage