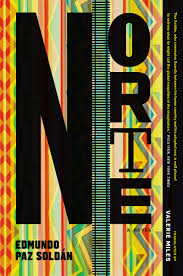 I learned in Spanish class that the idiom perder el norte means to lose one’s bearings, to be at a loss.

In Norte, author Edmundo Paz Soldán, a Bolivian expat, portrays three strong and ultimately interconnected voices of Latin-American immigrants who “are lost in the immensity of the US.” These voices speak of displacement, grief, and loss, the result of the painful tension between the cultural self and the smothering seduction of the United States, el Norte.

Originally published in Spanish in 2011, Norte has now been translated into English by Valerie Miles, who “wanted to preserve that feel of a novel that was narrated from outside the U.S. looking in.”

Both aspirational and debilitating for South-American immigrants, the U.S. is a place where one can find oneself or lose one’s soul. Through Jesús, Michelle, and Martín, we understand that, while the border between Mexico and America is a political and economic boundary, the border is also a porous emotional line between belonging and escape, dignity and hopelessness. The characters understand that “leaving one’s place on earth is a very cruel experience.”

Jesús, from Villa Ahumada in Northern Mexico, is a school and societal dropout. His Papá left to find work across the border, never to return. Because of abandonment and his family’s poverty, Jesús struggles with his impulses, his despair, and his personal impotence.

In the first chapter, Jesús commits a horrific rape and murder, finding a personal power and an addiction that drives his serial atrocities. His deeply pathological impulses create the crime story that is a strand throughout the novel. “He could do it again, though, sin problema. The thrill of the hunt, the turn-on of being ruthless, the risk.”

As Paz Soldán’s spare narration focuses on his character’s grotesque violence, the descriptions are profoundly unnerving and, for this reader, pass into the gratuitous. Perhaps some restraint might better lead the reader to understand Jesús’ cultural and class desperation.

On the other hand, Michelle’s story, narrated in the first person, stands as a foil. Earning a master of Latin-American literature degree in South Texas, she is articulate, introspective, and intellectually nuanced where Jesús is a blunt weapon of impulsive violence. She comes from an immigrant family in which her Papá is “incurably homesick” for Bolivia. Just as her Mamá says, “His head is always somewhere else,” Michelle finds herself similarly disoriented.

Working a shift at the local Taco Hut, she struggles with her academic direction. She wants to be an artist, but her “family background wasn’t conducive to being an artist.” Her relationship with Fabián Colamarino, a much older professor, is complicated and is yet another thread that weaves through the novel.

“He’s so edgy, and his heart is autistic.” And it is in this tension, “a mixture of desire and rage,” she fears will overwhelm the rest of her life, “lost in the ambiguity of loving and not loving.”

Michelle waves off an invitation to write in a show catalogue about the retrospective exhibition of Martín Ramirez, the third voice in Norte. “Something in his work was trying to speak to me, but I wasn’t in the mood to listen.”

A year later, she goes to the exhibit, and it is there she realizes “that I had begun backwards: it takes years of painting and writing before a person can find what their specific recurring themes are.” She has not even begun telling her story through her art.

The third and perhaps most compelling voice is Martín, an undocumented immigrant in California. He “had been a whole man when [his wife] found him, but now he was broken, alone.” Leaving his ranch and family to cross over to the North to pay off debt and escape the violence in Mexico, Martín cannot understand nor be understood. English sounds “like an insult” to him.

Anonymous, penniless, adrift, and sick, Martín embodies the loss, displacement, and loneliness of immigrants living in shadows. Eventually institutionalized for disabling emotional issues at the Stockton State Hospital, he sees himself as “a prisoner who endured, who didn’t surrender.”

In the daily chaos of excretions, screaming, and putridity, “drawing was the only thing that calmed him.” His art, a reflection of his lost wife and children, his beloved Mexico, and his dignity, evolves over time until his work achieves national acclaim after his death.

Edmundo Paz Soldán has written a riveting and gritty story of Hispanic immigrants. Through Norte, a story of crime and punishment, poverty and class, cultural and familial grief, the author has given us very different voices, each with a distinct and compelling rhythm and cultural ecology.

What I find so appealing about Norte is that Paz Soldán makes no attempt to sugarcoat the grim and persistent realities he portrays about immigrants who face being “one more digit in a disposable labor force…at the cost of living without dreams.”

He clearly asserts that the struggle against perder el norte is an arduous process of keeping one’s soul on the immigrant journey; his novel is but one stop on that journey.