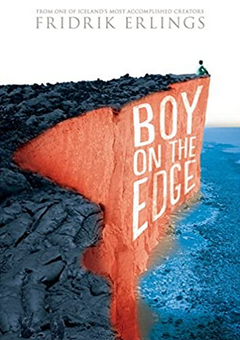 The cliff in Fridrik Erlings’ Boy on the Edge is both literal and metaphorical. Billed as one of Iceland’s most accomplished creators on the cover of this vividly written young adult novel, Erlings weaves a dark and moody tale within its pages. As with many American-sprung young adult novels, it may be as much for adults as teenagers. It’s the unsparing story of troubled boys placed in foster care at the edge of the world — the desolate coast of Iceland — and the bonds of true friendship and brotherhood, which transcend time and place.

The story opens — and closes — with Henry, the most lost of the lost boys. His tragically forthright perspective will carry us through the heart of this story. Before he enters the foster home, the narrative finds him with his struggling single mother. Henry has a form of dyslexia, along with major physical deformities. “Maybe it was all because of the way he looked. His tiny eyes and big nose, his small mouth with crooked teeth, his big head of tuft coarse red hair. And then there was his clubfoot, crumbling under his weight, as if he was falling over with every step. He stuttered, couldn’t read, and was brutally bullied.”

One day Henry fights back, and his mother ends up sending him to the aptly named Home of the Lesser Brethren, a farm run by a childless couple, the hard-charging and devout Reverend Oswald and his good wife, Emily. “Henry knew he was being sent away because he was trouble, because he was evil; he was being sent to the edge of the world so nobody would have to worry about him anywhere.” The descriptions of the farm and the countryside (the farmhouse is not far from a legendary place called Shipwreck Bay), as well as Henry’s uncomfortable place in his new home, give this novel an exotic, otherworldly edge. The landscape is wild, strewn with craters, volcanic rocks, and boulder outcroppings given names such as “the Gallows,” and trails such as “Spine Break Path.”

The action in this beautifully rendered but often turgid story heightens when other teenagers, John and Mark, along with angelic young Ollie, join Henry at the home. The older city boys want only to entice local girls to the caves along the cliff. Henry is more at ease with the farm’s cows and its gentle bull than with John, Mark, or even Ollie. The young boy becomes Emily’s new favorite, a rival to the jealous, lonely Henry.

Tensions arise over secret trysts and, even more so, the building of a new church for the Reverend for which the teen boys provide forced labor. However, the novel soon literally steps toward the edge as the teens plot to escape the Reverend’s increasing demands by scaling down the cliffs with an old boat Henry finds, and then into the rough seas. Their dream is to sail to Spain.

Ultimately, though, it is Ollie’s simple request to the barely literate Henry that comprises the central tension. The precocious Ollie, who memorizes poetry, who uses the verses as his yardstick to the world, wants Henry to read stories to him, and Henry does all he can to avoid him — to near-tragic results.

The cliffs are near for each character in Boy on the Edge, and if there is a cliff in a story one must go over it.

The story is a flashback from present day to about two decades earlier in Iceland, a place the narrator has left and not returned to, for reasons that will in part unfold and that, in part, won’t matter a lot by the end of the novel. In the prologue, the narrator describes himself: “The boy, who was once lost and alone at the edge of the world is now in the center, in a proper book, telling his own story.” In the epilogue, in a poignant letter from Henry, we learn that Ollie is the one who left and that he’s the narrator. Yet Henry’s letter to Ollie calls him back, redeeming them both once more, signed simply with: “Your brother, Henry.”

In Boy on the Edge, the chapters are short, numbered, and titled, and Henry grows and evolves with each one, coming to understand that “nobody can escape from himself,” a heavy-handed message in this often message-laden novel. Yet, at the same time, it’s the voice and inner life of Henry, his simple, acute observations, that distinguish the book. Through the worst of times, through despair and death at a small farm in Iceland, Henry will go on. Through him, we know that while the world is a dangerous, unpredictable, unfriendly place, it is also where hope and love can be found.

Ultimately, I tried to picture a 14-year-old American boy — my own son — reading Boy on the Edge; I think he would find this an old-fashioned story, one lacking in fast-paced dialogue, unexpected plot turns, or the end of the world dystopian exclamations of his favorite pop fiction novels turned blockbuster movies. At the same time, I’d hope that he’d feel that the desolation, sadness, loss, and, finally, Henry’s hopefulness and rebirth at the edge of the world, is a tale worth reading. I did.

Caroline Bock, a novelist, screenwriter, and poet, is author of the critically acclaimed young adult novels Before My Eyes and Lie.