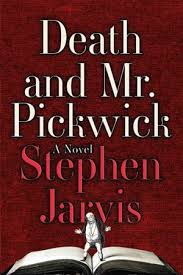 What if Charles Dickens’ inaugural novel was born of an idea that was never his in the first place? What if The Pickwick Papers were the creative brainchild of an illustrator? What if Dickens was such a pushy prima donna that his hijacking of the novel project caused that illustrator to commit suicide?

It could have happened, and author Stephen Jarvis shows us exactly how in one of the most fascinating, multilayered tales imaginable.

Jarvis has the enviable skill of being able to switch nimbly not just from character to character, but from story to story — all while holding the reader engrossed. Like Russian nesting dolls, there are stories within stories within stories in this book. And the best part is Jarvis’ ability to plop us smack-dab in the middle of Dickens’ time, with the horse-drawn carriages and butcher shops and pubs, where even the most gentlemanly of gentlemen would stop in for a pint now and then.

“A boy with patched breeches, lopsided hair and a sniff entered the Old Red Lion public house, where he looked here and there among the numerous drinkers gathered for the evening within. Making his decisive sniff, he approached a smartly dressed man in a blue coat, whose swallow tails hung down behind a stool at the end of the bar. The man also possessed a large leonine head, strong brow, and two thick groves of whiskers overhanging a laugh.”

He uses two characters from modern day, Mr. Imbelicate and his employee, Scripty, to connect the dots when necessary. (The reason Mr. Imbelicate’s name is not Indelicate is its own story, of course.) The sad tale of Grimaldi the Clown, so vividly drawn, pales in comparison to the tragedy that befalls Grimaldi’s son.

Jarvis makes the reader curious about every side tale woven through the novel, which is based on the truth that Charles Dickens did indeed start his career using the pseudonym Boz, and that illustrator Robert Seymour worked with Dickens at the beginning of The Pickwick Papers project.

Yet in the book, Seymour is a much more sympathetic character than Dickens. I wondered if Jarvis, like so many of us, was forced to write a term paper on A Tale of Two Cities and, even as a teenager began plotting his revenge on this Charles Dickens person.

He sprinkles out details of Seymour’s life, such as the time he met a carriage driver named Moses Pickwick, as hints of how Seymour birthed the idea of The Pickwick Papers. And with every sidetrack, Jarvis spins another interesting tale.

“The January of 1694 was the coldest that anyone in the village of Pickwick could remember, and snow was expected by all. This did not deter a mother from placing her newborn son, wrapped in thin and dirty linen and a piece of sack, on the grass beside the road, under the grey and threatening morning sky. To her credit, she did not deposit the babe in a pail and lower it down a well; nor did she press a pillow upon its mouth. Placed beside the road, it might possibly been seen and saved, before the wind administered the death blow itself, or carried the babe’s scent to the earth of its agent, the starving fox.”

Truthfully, sometimes I found myself wishing Jarvis would cut to the chase. Or I wanted to stay with a character a bit longer before jumping to someone else’s point of view. As a writer, though, I am in awe of anyone who can keep so many balls in the air for 802 pages. His is quite an admirable craft.

The story of a country man who headed to London to make his fortune but then died from the difficulty that befell him in the big city was wrenching. Many of the underlying stories Jarvis weaves to illustrate how The Pickwick Papers came to be are dark and depressing: a lost love because homosexuality was particularly forbidden so many years ago; countless stories of political corruption; unrequited desires; a day in the life of a debtors’ prison; a man’s slow descent into madness.

Amid such a stark backdrop, Jarvis’ characters say poignant things. Consider, “I often feel that the desire for novelty and the force of habit fight for a man’s soul.” I might say the same goes for a woman’s.

That same narrator, under Jarvis’ pen, sums up why Seymour might have felt he had no other option than suicide after watching his ideas be, as he felt it, tossed aside and belittled.

“It is the fortune of some to reach the heights of fame; and of others to be ground down by life, until they are as worthless and inconsequential as dust.”

Death and Mr. Pickwick is by no means a light read, but it’s a creative take on a particular time in history. Was Charles Dickens an idea thief and an egomaniac? Does it matter? How did The Pickwick Papers come to be? Kudos to Stephen Jarvis for delving so deeply into what he describes as the way it really happened.

Donya Currie is a journalist, fiction writer, and the web manager for a nonprofit organization in Washington, DC. As a high-school freshman, she was forced required to write a term paper on A Tale of Two Cities.

A tense military thriller proves hard to put down and impossible to forget.