Madonna in a Fur Coat 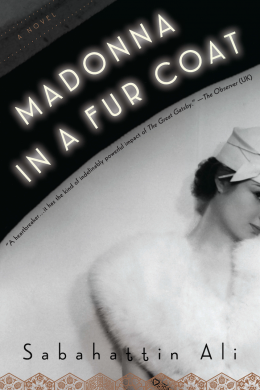 In this poignant novel — first published in Turkey in 1943 and now available in English — Sabahattin Ali tells a passionate tale of emotional isolation, newfound intimacy, and the gut-wrenching intensity of love and loss.

Our narrator, a young clerk at a factory in Ankara, forms an unusual friendship with his office-mate, the company’s interpreter of German documents, Raif Efendi. By all accounts, Raif is an average person with no distinguishing features: He is working at an average job and living an average life. Raif rarely speaks to anyone, including his family.

It appears he even approves of the ridicule he inspires from others. After several months of a tenuous friendship, Raif becomes ill and asks the young clerk to retrieve his journal from Raif’s locked desk at the factory.

Our narrator yearns to discover more about the introverted man he’s worked beside and begs to read the diary. What he learns from the pages handwritten years earlier astounds him and stays with him for life.

Yes, Raif is an ordinary person, but one who has experienced extraordinary passion — the frigid loneliness of isolation, the exquisite joy of love, and the paralyzing grief of loss.

As a young man in the early 1920s, Raif’s father sends him to Berlin to learn new methods for the family’s soapmaking business. But Raif’s creative personality is caught between his father’s wishes and his lack of interest in anything business.

An avid reader, Raif craves learning a new language and experiencing the lives of the Europeans he’d read so much about. He spends his time walking, exploring, and gleaning insight into German culture. But just as in Turkey, he is totally alone.

After a solitary year in Germany, Raif happens upon an art exhibit and is transfixed by the painting “Madonna in a Fur Coat,” a self-portrait of a stunning woman wrapped in white fur. He is mesmerized by her beauty and the strength of her expression. He stares at her magnificent portrait hour after hour and develops a strong spiritual attachment to the picture’s mysterious subject.

One night, Raif catches a glimpse of his Madonna on the street and decides he must meet her, following her to the nightclub where she sings. He is bewitched by her gaze and quite shocked when she sits down at his table after her performance.

So begins their unusual relationship.

Maria Puder is unlike any woman Raif has ever met — independent but guarded, putting little faith in the intentions of the men she meets. But Raif’s inexperience with women gives her comfort, and they soon spend every day together, sightseeing the entirety of Berlin.

Is it love or just an intimate connection between friends? After months of one never being without the other, two tragedies come between them and test their devotion. Lost in a sea of mishap and misunderstanding, they may never find each other again.

Ali expertly weaves a tragic story of loneliness, love, and grief, giving us a glimpse of spiritual isolation. Readers are pulled into the monotonous and lonely life of Raif Efendi, where they are sure to experience his acute alienation, his happiness upon finding a person who understands him so completely, and the pain and resentment caused by an ironic misunderstanding. This classic tale causes us to examine what our own lives would be like without the people we cherish.