Nein, Nein, Nein!: One Man’s Tale of Depression, Psychic Torment, and a Bus Tour of the Holocaust

A writer soothes his sadness at Auschwitz. Really. 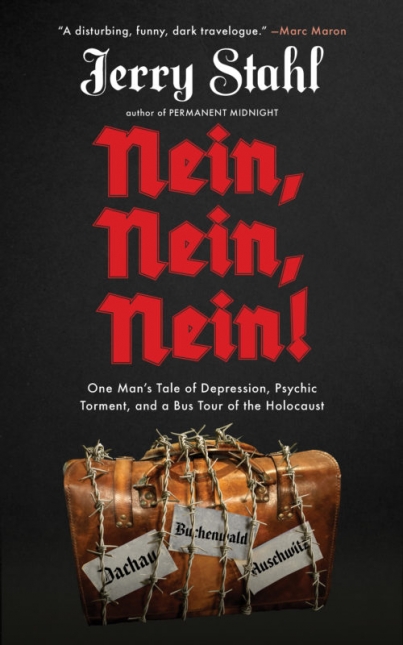 I can never remember if it’s feed a cold and starve depression or the other way around, but Stahl (author of the memoir Permanent Midnight and screenwriter of the film “Hemingway & Gellhorn,” among numerous other works) decides to dive headlong into the heart of his depression and unraveling life by, of course, visiting Nazi death camps. His marriage is failing, and his latest pitch to network TV is dying via increasingly surreal and curt phone and text messages, so why not?

The result is this revealing, sometimes embarrassing memoir that (mostly) successfully navigates the razor-thin line between laughter and tears.

Think Hannah Arendt’s “The Banality of Evil” with a laugh track. Or imagine Henny Youngman as your guide to some of the most horrific spots human depravity has ever produced. After a snappy one-liner about his mother-in-law, Youngman could use his violin bow to point out the ceiling hooks used to hang Jews and other undesirables at Dachau so they could see those ahead of them in line about to be incinerated.

Nein, Nein, Nein! at times feels like a sick-joke tour of concentration-camp gift shops, and I suspect that’s exactly what the author intended. “I’m reminded of a joke I have heard alternately attributed to Slavoj Zizek, Gilbert Gottfried, or Ricky Gervais,” he writes, continuing:

“An elderly survivor of the camps dies and goes to heaven. At the pearly gates, he meets God and tells him a Holocaust joke. God says, ‘That’s not funny.’ And the survivor says, ‘I guess you had to be there.’”

Stahl’s deft use of humor is made all the more powerful by his rare, deadly serious asides. “I would like to think that the pain and suffering of the Holocaust and what we feel, confronted with it, can be a portal to ongoing agonies suffered by others,” he reflects in one passage. The book is at its strongest during these quiet moments.

The most affecting displays at the various sites he visits on his macabre sojourn tend to be the most basic. Plain black-and-white photos or those aforementioned ceiling hooks are more powerfully evocative than high-tech immersion exhibits. And most affecting of all? Stahl’s own words, which ably capture the unfathomable cruelty that once played out across Europe.

Just don’t feel guilty if you find yourself laughing while reading Nein, Nein, Nein! as this depressed guy recounts his exploration of these nightmare locations (which really do boast gift shops and eateries). The power of humor and the tension and contrast between laughing and crying — especially during moments when we want to do both — truly can act as portals through which we grow and hopefully learn to do better by one another during our brief time here on earth.

Michael Causey hosts the radio program GET UP! Mondays on WOWD 94.3 F.M. in Takoma Park, Maryland, and on takomaradio.org.