My Grandfather Would Have Shot Me: A Black Woman Discovers Her Family’s Nazi Past

The author struggles to reconcile fond memories of her grandma with that woman's love of a mass murderer. 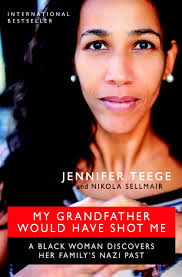 Jennifer Teege has a fascinating story. Half German, half Nigerian, she grew up with an adoptive family in a small town in Bavaria. She had a strained, distant relationship with her birth mother and never met her birth father until after she’d graduated from high school. Despite her fractured family past, Teege managed to forge a stable, productive life with her husband and children in Hamburg, Germany. Then one day she stumbled upon a shocking family secret in a book she just happened to pick up at the library.

Teege discovered that her grandfather was Amon Goeth, the “butcher of Płaszów.” While his name is not a household term, most of the world remembers the murderous Nazi commandant depicted by Ralph Fiennes in Steven Spielberg’s film "Schindler’s List." Teege realized, to her horror, that the trigger-happy madman shooting prisoners from his balcony was actually her Opa (grandfather), whose memory her Oma cherished and defended until her death.

My Grandfather Would Have Shot Me is the book resulting from Teege’s attempt to understand how and why her family kept this secret from her, and her struggle to come to terms with the horrible truth. Co-written by journalist Nikola Sellmair, the book is both memoir and biography, switching back and forth between Teege’s first-person account and Sellmair’s more comprehensive reporting perspective.

The book starts, as seems natural, with Teege’s shock and many questions: “I’ve always felt so close to [my grandmother]. Yet she also held Amon Goeth when he came back from his killings. How could she share her bed and her home with him? She said she loved him, but is that a good enough excuse? Is it good enough for me? Was there anything loveable about Amon Goeth — is that even a permissible question?”

These are fascinating questions, but although the book focuses on Teege’s journey to answer them, her grandmother, Ruth Irene Goeth (née Kalder), is arguably the true star. Sellmair depicts Ruth Irene as Amon’s beautiful, ambitious live-in lover (he was married when they started seeing each other); a woman so in love with the dashing, cultured commandant that she overlooks the barbarity going on in the camp next to the villa she shares with him. A chilling archival photo included in the book reinforces the depth of her denial: A stylishly dressed young Ruth Irene, black curls piled on top of her head, poses with one of the dogs Amon has trained to rip prisoners to shreds.

To be clear, this book is not a niche tome for German culture and history buffs. It presupposes no knowledge beyond that gleaned from "Schindler’s List," which it references heavily. The most compelling dilemma of the memoir is Teege’s fight to square her fond memories of her grandmother, whose warmth and acceptance she had always depended upon, with the world’s image of a willfully ignorant lover of a mass murderer.

Sellmair lays out the historical background to Teege’s family drama in a simple yet enlightening fashion. She is at her best when juxtaposing Teege’s loving memories with some of Ruth Irene’s most outrageous moments.

One of the highlights is Israeli historian Tom Segev’s account of his interview with Teege’s grandmother in the late 1970s. Sellmair treats the reader to Segev’s description of Ruth Irene in a Chinese wrap, chain-smoking and acting out the nihilism of Weimar Germany in a gloomy apartment with heavy furniture and dark velvet curtains coated in dust:

“‘Oh, well, Płaszów,’ she said in a husky, raspy voice. ‘Yes, yes, Płaszów.’ She paused and then suddenly said: ‘They will tell you that . . . I was a whore. Indeed, I did keep company with a large number of officers, but only until I met Goeth…It was a wonderful time…My Amon was king, I was his queen. Who wouldn’t have relished that?’ She added that she was only sorry it was all over. As to Amon Goeth’s victims, Ruth Irene Goeth adds: ‘They weren’t really people like us. They were so filthy.’”

But why, when the book is supposed to be about Teege’s journey, might a reader be more drawn toward Ruth Irene’s story? The answer may have something to do with the structure of the book. While incorporating both Teege’s and Sellmair’s voices is an admirable idea, the constant toggling back and forth in time, place, topic, and perspective burdens the reader with the task of regrounding himself or herself every few pages.

The switching makes it necessary to repeat information to guide the reader back into each scenario, giving the book the feel of a great long-form article having been stretched to book length (indeed, Sellmair authored the very first article about Teege).

The memoir’s subtitle, “A Black Woman Discovers Her Family’s Nazi Past,” sets the reader up to expect a more substantive discussion of race than the sporadic points the work delivers. Oddly, we don’t hear about her meeting her Nigerian father until the second-to-last chapter, which is tacked on after a description of her time in Israel that at times sounds more like a travelogue than a reflection on her family’s complicated history with the Jewish people.

A stronger thematic focus and a steadier progression through Teege’s story may have given this book greater cohesion, thereby allowing the reader to become more immersed in it. The reader is left, instead, to piece events together and be directly told how Teege felt as her exceptional story unfolded.