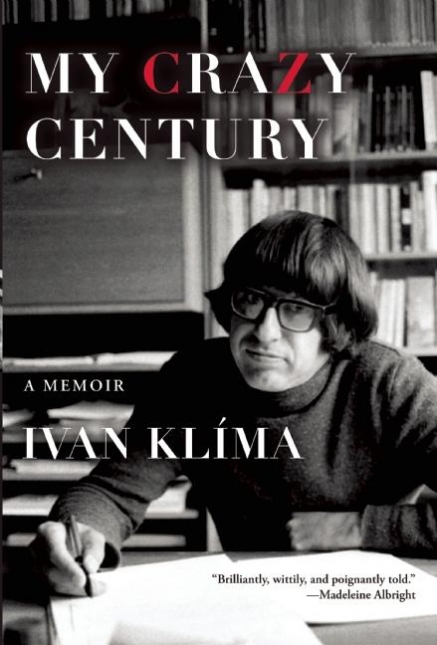 From the first page, we know this is not another dry political memoir. Ivan Klíma describes snowflakes falling on a neighbor’s roof, which evoked a “hungry, black-headed monster, gobbling up the snowflakes until it was sated and only then allowing the snow to gradually accumulate on the dark surface.” Klíma is a celebrated novelist as well as a prominent dissident under the Czechoslovak Communist regime. His memoir, which in 2010 won the Magnesia Litera (the major Czech literary prize) for nonfiction, offers a tour of his life and political developments in Czechoslovakia from the interwar period through 1989.

The book’s first section begins by describing Klíma’s experiences in the Nazi concentration camp of Terezín, and closes by noting: “It’s a strange world when you are called upon to explain why you weren’t murdered as a child.” During four decades of Communist rule, Klímadevelops from a willing if unenthusiastic party member who had joined without much thought, to a disillusioned one (after his father was railroaded on ideologically motivated charges), to an open dissident in the late 1960s.

Communism’s economic ideology was not much of a focus for Klíma. Rather, his realization that a society without freedom of thought could not “evolve” motivated him to embrace resistance. In 1967, his public opposition to the regime led to his expulsion from his editorial position at a literary journal, an act that left him “bitter” but also “free.” Klíma subsequently found himself followed as he walked Prague’s streets. He had become one of the “enemies of socialism.” As for the events of Prague Spring in 1968, Klíma noted, “never before or since have I lived with such haste or intensity.”

One of the many creative forms of resistance in which Klíma participated after 1968 was to organize and help produce a series of works by dissident writers (which were hand-typed and bound). To avoid breaking the law on distribution, the title page included the warning: “Further Copying of the Manuscript Expressly Forbidden.” In Czech, the first letters of each of those words spell “resistance.”

Klíma describes a colonel’s elaborate attempt to convert him to the regime’s side by offering to ensure the publication of his books in return for an unnamed favor. Klíma understood that accepting this bargain would require him to end his opposition to the morally corrupt regime, which sought to buy off opponents rather than actually serve its people. The memoir shows what life was like for a dissident in Prague in a way no ideological tract could. Klíma does not present himself as a hero, although his retelling of how he helped spread subversive literature understates the courage such actions must have required.

By 1989, Klíma was playing a public role in the nonviolent protests that resulted in the downfall of the Communist regime. He compared his feelings to those he had experienced when liberated from Terezín in 1945: “There are few experiences as strong as that of freedom, especially when it seemed for decades so unattainable.”

Notably, the book does not address the influence of Klíma’s Jewish heritage on his political and personal development. His parents were not observant; indeed, Klíma did not know of their background until the Nazis sent the family to Terezín. As an adult Klíma remained completely secular in terms of belief but married a Jewish woman who had spent time in Israel on a kibbutz. Later, one of Klíma’s daughters married an Orthodox Jew. It would have been interesting to hear Klíma comment on how he understood his Jewish identity. That he and his daughter each married one of a few thousand other Jews in a country of millions suggests that he put some stock in being members of the Jewish people (separate from any religious belief). In a memoir with such personal detail, a discussion of Klíma’s understanding of his Jewish identity and how he believed it influenced (or did not) his life choices would have been enlightening. The memoir’s Czech version — twice as long as its English-language counterpart — may contain such reflections.

We learn much about Klíma’s adult personal life: he dates, he gets married and has two children, he struggles professionally, he finds success as a writer. He holds little back, telling even of his adulterous affair. The majority of these details add little to our understanding of his political development, but Klíma tells the tale expertly and it is an enjoyable read. We care about the fascinating protagonist of this story. However, would a memoir of Klíma the novelist have been written had he not played a prominent role in resisting Communism? Probably not. That the memoir ends in 1989 — after which point he refused any further participation in politics in order to concentrate on his writing — suggests that he also believed his political developments were the parts of his life most worth reading about.

My Crazy Century describes how a man lived without freedom and fought for it. It shows as well that freedom fighters have lives and flaws, in addition to great strengths. To anyone interested in the Cold War, Central Europe or the Czech lands, European Jews and life under a Communist regime, this book will appeal greatly. Klíma’s memoir offers a vivid telling of a courageous man’s life and times, something that can speak to all of us.

Ian Reifowitz is the author of Obama’s America: A Transformative Vision of Our National Identity and Imagining an Austrian Nation: Joseph Samuel Bloch and the Search for a Multiethnic Austrian Identity, 1846-1919. He has published op-ed articles in the New Republic, the Daily News and Newsday, along with articles on Central European history in various academic journals. He is associate professor of Historical Studies at Empire State College of the State University of New York.