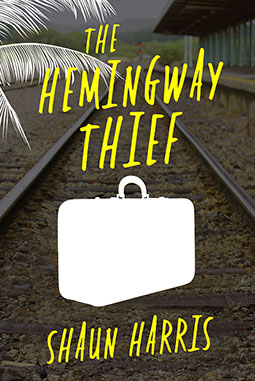 While you don’t need to appreciate Ernest Hemingway himself to enjoy or even follow The Hemingway Thief, it certainly doesn’t hurt. For better or worse, Shaun Harris’ debut novel is informed by Papa’s penchant for globe-trotting adventure and staggering machismo.

The Hemingway Thief itself is a fun genre exercise that relishes in the tropes of crime and mystery fiction while offering some thoughtful ruminations on the nature of being a writer, specifically the crippling self-doubt that accompanies this pursuit and the careful calculation and posturing it demands. The book’s disparate elements aren’t always carried off well, nor do they hang together perfectly, but the ambition is impressive.

The novel’s main character is Henry “Coop” Cooper, a successful author of a vampire-romance series written under the pseudonym Toulouse Velour. Coop has come to Mexico to rethink his career and hopefully begin a new novel, something gritty and true that he will be proud to publish under his own name.

Before long — and in the company of an ex-cop hotel owner, a small-time con man, and a concierge who might be more than he seems — Coop finds himself caught up in a treasure hunt for a suitcase full of Hemingway’s lost works. In pursuit of their treasure, the band of adventurers comes up against several hitmen (and hit-women), drug cartels, the harsh Mexican terrain, and the world’s most terrifying rare-books dealer. It’s The Treasure of the Sierra Madre meets “The Hangover,” if Bradley Cooper’s character were the male Danielle Steel.

Film references are apt here, because one of The Hemingway Thief’s strongest qualities is how cinematic it is. The plot is propulsive, with plenty of action and suspense (and a substantial body count). The writing, especially the dialogue, crackles with wit and shows off Harris’ pop-culture savvy. The setting, in particular, is vividly conjured. The novel’s Mexico is a fever dream of sunbaked canyons and rum-soaked cantinas — pulpy, sure, but that’s sort of the point. It’s a blast to read, but it’s an experience you’re happy to be having secondhand.

The Hemingway Thief succeeds in creating and unraveling its fictional answer to the very real mystery of Hemingway’s lost suitcase. Where a lesser author might have resorted to cheap twists or far-fetched explanations, Harris lays the information out carefully and convincingly. Without giving the game away, the revelations are poignant, even heartbreaking; they are grounded in the familiar “manly adventurer” image of Hemingway, yet they also invite readers to rethink the authenticity of that image.

Harris is less successful, though, in his attempts to say something interesting about masculinity, a crucial ingredient in the novel’s gumbo. Male protagonists in the crime genre are typically desperate to have their masculinity affirmed, and Coop is no exception. He wants to be a writer with integrity and with exciting stories to tell at parties. His romance novels are a constant source of embarrassment because they’re “chick books” and because his nom de plume is frequently mistaken for a woman.

Harris clearly aims to draw parallels between Coop’s feelings of inadequacy and Hemingway’s own carefully constructed persona. That could have been interesting, but the novel abandons any serious exploration of Coop’s dilemma about halfway through. It comes up again in the final pages, but Harris never really connects the thematic dots. Meanwhile, the book is peppered with misogyny.

The male characters insult one another by attacking each other’s masculinity: “I’m tired of people thinking I have a vagina,” Coop tells his agent, to which the agent responds, “You whine like you do.” The only two women to figure into the story in any meaningful way aren’t characters so much as sexy, evil plot devices. Scarcely are their names mentioned without the accompanying phrase “that bitch,” though Harris takes pains to detail the perfection of these women’s bodies whenever they appear.

If the intent here is to conjure up another trope, the femme fatale, then the result is disappointingly one-note, not to mention predictable.

I say “disappointingly” because there’s much to enjoy in The Hemingway Thief’s sendup of the genres it borrows from. Nevertheless, it would have been great to see Harris interrogate the genre a bit more, particularly its more tired or retrograde elements.

Toward the end, Coop explains that writers start off bad and, if they’re lucky, get better as they go. The Hemingway Thief is by no means a bad first novel. Harris has proven himself a smart writer with smart things to say about writing, but it feels like a starting point for him as an author — a work that demonstrates plenty of potential, even if it doesn’t fully deliver.

Sutton Strother is a writer, teacher, Kentucky native, and New York transplant. Her work has appeared in Underwired, Fogged Clarity, and Natural Bridge.

A sweeping, multi-generational saga about a fabulously wealthy Chinese Hawaiian family and its dark secrets.