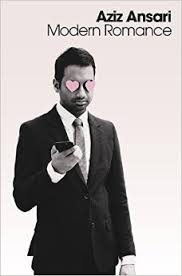 In writing Modern Romance — co-authored with NYU’s Eric Klinenberg — the stand-up comic and “Parks and Rec” regular Aziz Ansari has forged a new genre. (Perhaps we can call it comic-ademic?) The book fuses personal anecdotes, experts’ insights, comedy, and original research. The authors’ primary goal is to explore in both serious and funny ways the intersection of communication technology (“phone world”) and the stages of the relationship process.

It’s clear that Ansari cares about the topic; he’s been mining it in his stand-up for some time. In his live shows, for instance, he asks audience members to join him on stage while he reads the texts they’ve recently exchanged with potential dating partners. (His conclusion: “Most dudes out there are straight-up bozos.”)

The book poses the fundamental question: How do we go about pairing off in a world with no rules and constantly shifting tools? Organized into seven chapters, it is highly readable. There are no literature reviews or in-text citations, and roughly 10 unobtrusive footnotes per chapter. Even though it focuses on heterosexual couples, the authors are refreshingly candid in their analysis of sexism and racism at various stages to the dating process.

Modern Romance begins by discussing the emergence of “soulmate” standards, then progresses from “asking out” through online dating. Next it tackles technology-based deception and spying, and in the end attempts to offer guidance about when to settle down for the long haul.

In between, there is a very good chapter on the paradox of choice as it applies to dating, and a somewhat weaker chapter on dating in Tokyo, Paris, and Buenos Aires. Partly due to the background presence of Klinenberg, the interpretive sense the book makes of the intersection of technology and romance is solid, not superficial.

Sadly, social science and humor are usually opposites as far as methods for understanding the human condition. This is despite the fact that much of comedy is sociological (see Louis C.K.). One of the things that Ansari and Klinenberg recognize is that there’s a large and growing segment of the target audience comfortable and willing to spend their leisure time with graphs, data, and small doses of academic-speak.

The book is ambitious and merits being taken seriously — even though the sections discussing original research are not quite as strong as the expert analysis and comedy. There is no doubt it would have been easier for Ansari to write a book based on anecdotes about sex, dating, and break-ups.

Instead, he and Klinenberg not only established a Subreddit called “Modern Romancers” for crowdsourcing reactions to their emerging ideas, they also conducted focus groups in multiple cities across the planet. Given the extremely rapid changes in the dating world in even the past two years, modern romance is a topic ripe for original insight.

The interviews with academics Andrew Cherlin and Sheena Iyengar, as well as Helen Fisher of Match.com, are engaging and effective, and some of the sections (such as the one where psychological theories are applied to topics like “texting games”) are fascinating.

Still, it’s important to assess whether the book succeeds at being funny. As a reader who loves humor but seldom laughs out loud while reading, my answer is: Definitely. Even if the hit rate for jokes is 50 percent, that’s plenty for me.

The book certainly relies on crude, sexualized language at times. Attempts to make the academic parts more relatable (er, more “dope”) by expressing them in the language of intoxicated twenty-somethings grow old. Among many examples, Ansari writes that “Columbia professor Sheena Iyengar…knows a shit ton about choice.”

But other informalizing touches work well. At one point, Ansari makes a crack about how the idea of soulmates could be summarized as “she is my other half” or “Every time I touch her hair, I get a huge boner.” Several pages later, he clarifies that sociologist Cherlin “would also like me to reiterate that this hair/boner analogy is mine and mine alone.” As a college professor who teaches the research of Cherlin frequently, I found it delightful to see the academia/comic wall broken down.

Readers may finish the book still stumped about the dilemma of the better partner waiting just beyond the next Tinder swipe, but consider this my small but enthusiastic vote for more comedy-sociology mashups moving forward. Modern Romance is a fun and enlightening read for anyone who wants to understand today’s pairing scene.

Mick Cunningham is a professor of sociology and department chair at Western Washington University in Bellingham, WA. He specializes in contemporary U.S. families, with particular interest in marriage, divorce, and gender. His comedic tastes derive from “Arrested Development,” “Veep,” and Steve Martin albums from the 80s. He met his current partner on Match.com.

Our Symphony with Animals