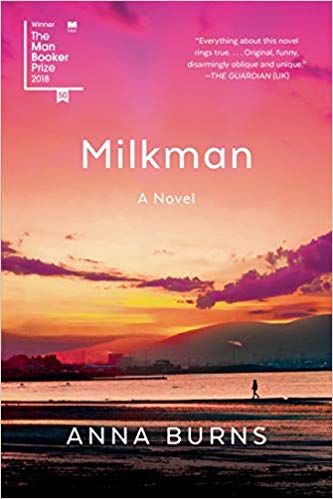 Milkman, Anna Burns’ 2018 Man Booker Prize-winning magnetic novel, is likely to divide readers. It is not a book for everyone. Not everyone will like it. But everyone should read it. Those who stay with it will admire its style, its setting, its characters. Those who dislike it will dislike its style, its setting, its characters.

Strip away what some may see as obfuscating language, and Milkman is basically a coming-of-age romance, a bildungsroman with the Irish Troubles of the 1970s as a backdrop. The novel is more a psychological and sociological study of a nameless 18-year-old girl than an overview of a significant historical period.

The overriding, distinctive quality of the novel is its style. The Booker judges found it confounding. They deemed it “baffling” and “experimental.” They suggested the book needed to be read aloud to be understood.

Yes, the overlong, extended paragraphs — sometimes unbroken for pages — might be difficult to read. But last year’s Booker winner, George Saunders’ Lincoln in the Bardo, was no leisurely stroll through the cemetery, either. And there’s a longlist (those judges are fond of long lists) of previous winners that have been challenging to read, from John Berger’s G. (1972) to Roddy Doyle’s Paddy Clarke Ha Ha Ha (1993).

Nobody ever said Joyce, Woolf, Beckett, Mann, or James are for the faint of heart. Milkman falls into that company. Yet even among those distinguished writers, there is a uniqueness to Anna Burns. This is apparent from the start, when she chooses not to name her characters, but rather to identify them with telling soubriquets.

In an interview given before she won the prize (the first time a writer from Northern Ireland has done so), Burns said, “The book didn’t work with names. It lost power and atmosphere and turned into a lesser — or perhaps just a different — book. In the early days I tried out names a few times, but the book wouldn’t stand for it. The narrative would become heavy and lifeless and refuse to move on until I took them out again. Sometimes the book threw them out itself.”

And so the novel opens with a powerful, throat-grabbing sentence: “The day Somebody McSomebody put a gun to my breast and called me a cat and threatened to shoot me was the same day the milkman died.”

As the narrator’s sleek stream-of-consciousness rambles on, the reader learns she is involved with “maybe-boyfriend,” a 19-year-old who knows his way around cars, especially the supercharger of a Blower Bentley.

But, despite the gossip of the community (an unnamed city, most likely Belfast), she really doesn’t have a relationship with another man, “milkman,” a sort-of stalker who is married, 23 years her senior, and perhaps a paramilitary “renouncer of the state.”

Not only does the narrator have no interest in this apparent deviant, she has no serious interest in the turmoil around her. Though not oblivious to it, her primary interest is books, to the point that she has garnered her own nickname, “Reading-while-walking.”

The reader, like milkman, comes upon the narrator reading Ivanhoe. It is one of the many 19th-century novels referred to in the book; later, The Brothers Karamazov, Tristram Shandy, Vanity Fair, and Madame Bovary are mentioned. She doesn’t read 20th-century novels because she “did not like the twentieth century.”

Some of the things she doesn’t like about that century include members of her family. Her third sister often “had a glass of Bushmills in one hand and a glass of Bacardi in the other because she was still at that stage of working out what to have for her first drink” of the day. And the narrator doesn’t like the “suspicion, supposition and imprecision” that surrounds her.

The tight-knit tribalism which subsumes the neighborhood in an apparent sign of protection also isolates members with different minds. There is a red-light street (not district) that exists to segregate “young couples [who] went to live together who didn’t want to get married or conventionally to settle down.” This includes couples of mixed religion or same sex. At one point, maybe-boyfriend suggests he and the narrator move there.

A psycho-political atmosphere with its own “rules of allegiance” even pervades the choosing of names for children. Names which suggest those from “over the water” or “over the road” are banned. They are understood to have “become infused with the energy, the power of history, the age-old conflict, enjoinments and resisted oppositions as laid down long ago.”

The same cultural ostracism occurs if someone marries the “wrong spouse.” Not the “outgrowing of what was once a successful union…but [the] business of people marrying people they didn’t love and didn’t want and where someone from the outside might look in and shake their head and say that somebody ought not to be in such an intimate position in another somebody’s life if it turned out they were the wrong somebody.” The narrator is certain her mother has married the wrong spouse, and she wants to avoid that in her own life.

There appear to be only five options out of her circumstances: “Live…die…be injured…fail…[or] the state will catch us.” But there is a sixth possibility, too: Leave.

That is what maybe-boyfriend’s parents did. They abandoned their four sons to “dedicate themselves fully to professional ballroom-dancing careers.” They’d written a note but neglected to leave it, even forgetting their former address when they finally sent it from a “country over many, many waters.”

The couple is missing from much of the novel but gains an international reputation. Little girls mimic them in “long clothes and high heels”; they had achieved that “outstanding status of straddling the sectarian divide.” And they proved the “wrong spouse issue” by being married to the right spouse.

By the time maybe-boyfriend becomes ex-maybe-boyfriend, the narrator has endured “sorrows, losses, troubles, and sadnesses” inherent in the “political problems” of the period. After a major revelation, she finds herself embedded in a triangle she could never have imagined. One that alters her life. Her “stubborn, perverse” character, which labels her as the “pale, adamantine, unyielding girl who walks around with the entrenched, boxed-in thinking,” becomes her salvation.

Milkman vibrates. It is energized with a perspective that immerses the reader in a setting that commands attention. It resonates because of the symbiotic interplay of its characters. Its language soars. It would be the same story if it were written in blood. And, in some ways, it is.

Robert Allen Papinchak, a former university English professor, has reviewed a range of fiction in newspapers, magazines, journals, and online, including the New York Times Book Review, the Washington Post Book World, the Chicago Tribune, the Los Angeles Review of Books, the Seattle Times, USA Today, People, the Writer, Publishers Weekly, Kirkus Reviews, the National Book Review, the New York Journal of Books, World Literature Today, the Strand Magazine, Mystery Scene Magazine, Suspense, and others. He has been a judge for Publishers Weekly’s BookLife Creative Writing Contest and the Nelson Algren Literary Prize for the Short Story. His own fiction has been nominated for the Pushcart Prize and received a STORY award. He is the author of Sherwood Anderson: A Study of the Short Fiction.