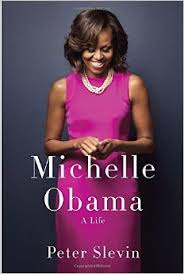 Michelle Obama. She’s our first lady and the first African American to hold the position. And she now has a biography, written by Peter Slevin, which is the first serious attempt at evaluating her life.

The book traces her formative years growing up in a close-knit, working-class family in racially divided Chicago. Slevin writes that despite knowing “that the playing field was tilted away from their children because of their race and class,” her parents believed “that a combination of love, support, perseverance, and upright living could win out.”

These values helped propel Michelle to Princeton and Harvard Law School, then back to Chicago to a blue-chip law firm. Her reputation was for being smart, outspoken, motivated, tenacious — qualities that were earning her both financial rewards and social status.

It could have stopped there — well into the classic Horatio Alger success story. But then came the death of a college friend and the passing of her father, a multiple sclerosis sufferer.

“If I die tomorrow,” Michelle later recalled asking herself, “What did I really do with my life?”

She’d just begun dating Barack Obama. One of the main draws was his commitment to fighting for the underprivileged. Michelle soon gave up lawyering, accepting a steep pay cut to take a public-service post in the mayor’s office. Later, she headed the city’s Public Allies program, where she incentivized young people to work on social issues, and then went on to develop the University of Chicago’s Community Service Center and to serve as VP for community affairs at the school’s hospital.

Slevin’s book well captures what happens when a gifted and driven community activist — one with a famous aversion to politics — is faced with a husband who becomes interested in running for office.

A feminist who believes in equal partnership, Michelle took on the bulk of the family’s domestic duties during her husband’s first run for Congress, which ended in defeat; she did the same during his later successful run for state senator.

When Barack was asked to give the keynote address at the 2004 Democratic National Convention, his young political career turned red hot.

“Just say no!” the selfish part of Michelle warned when her husband asked her to support his run for the presidency. “But that’s the problem we face as a society,” she later recalled chiding herself, “we have to stop making the me decision and we have to make the we and us decision.”

Since becoming president, her husband has indeed been in a position to help turn their common aspirations — for a more just and equitable world — into reality. There’s the Affordable Care Act, Obama’s executive action to shield millions of undocumented immigrants from deportation, and the president’s recent public support of legalized gay marriage.

But what has Michelle herself accomplished?

Unfortunately, in describing her career before her husband’s run for the presidency, Slevin’s book is more a silhouette than a fully painted portrait: the outlines of what Michelle has accomplished are there, but the details are conspicuously absent.

The book gathers many quotes that would not be out of place at a eulogy: mostly vague and almost unwaveringly positive. This could reflect, in part, a desire by interviewees to protect the sitting president’s wife, particularly given that the Obamas are the first African-American family to reach the White House. Michelle also did not grant Slevin interviews for the book, and many of his quotes are gathered from third sources.

And what of the past six years? Despite wanting to make the East Wing more than just “a velvet coffin, comfortable but pointless," Michelle has been hamstrung by the glare of the spotlight — one unusually harsh because of her race.

As not to prove a distraction to the administration, she has played quiet second fiddle, cultivating the role of mentor, promoter of childhood nutrition, supporter of military families, and opponent of inequality. Even in this reduced capacity, any false step, writes Slevin, meant she “risked death by a thousand tweets.”

In 2017, Barack will leave the White House. For a man who has gone on record about the importance of men taking equal parenting responsibility, this will be his opportunity to pay back his wife, the woman who has made all the big sacrifices, “No matter,” he has admitted, “how much I told myself that Michelle and I were equal partners, and that her dreams and ambitions were as important as my own.”

Michelle is now only 51. She has plenty of time to make her own mark. Yes, she does not love politics and is much less of a compromise-seeker than her husband. But she’s a better fundraiser. And most importantly, she has a unique set of attitudes, experiences, and contacts that comes from being the first black woman to make that long, challenging climb from the South Side of Chicago to first lady of the United States.

She is reportedly working on an autobiography to come out after the Obamas vacate the White House. In it, she will surely share her version of what she has accomplished and learned in life. It may prove a steppingstone to her next big career move. It certainly will provide much grist for the next biographer looking to continue the work begun here by Slevin.

Dr. Andrew Marble is writing a biography of former chairman of the Joint Chiefs of Staff Gen. John Shalikashvili.