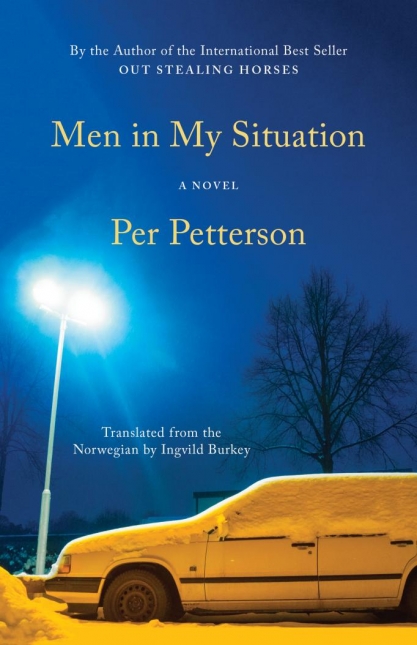 It’s not often a novel comes along that explores the vicissitudes of the male psyche, especially as they relate to those inner moments that deal with love and loss. Men are typically depicted as strong, successful, and cocksure. In romances, they may be portrayed as rugged or macho. In mysteries, as cool and cunning. “Vulnerable” is almost never an attribute, insecurity never a trait.

But not so with Men in My Situation, a new novel straight out of the fjords by award-winning Norwegian author Per Petterson.

It’s the story of Arvid Jansen, whose marriage has just collapsed and whose parents and brother have recently died in a ferry accident. Arvid is also the father of three daughters with whom he struggles to have a meaningful relationship. Throughout the novel, he wanders about town getting drunk and engaging in sporadic sexual encounters, including with a next-door neighbor unsatisfied with her own marriage.

It’s through these casual trysts that Arvid tries to find meaning, to discover who he really is and what he really wants. Yet, like most everything else in his life, they amount to nothing. The only significant bond he has is with his friend Auden — the only one able to get Arvid to take a hard look at himself — whom he hasn’t seen in ages.

A kind of hapless celebrity because of the ferry tragedy, Arvid is already a well-known writer recognized wherever he goes. Nonetheless, we don’t see him practicing his craft; suddenly, at the end of the story, we learn he has finished a novel. Like everything else in his life, it just seemed to happen.

In essence, Arvid is caught between fame and a desire for anonymity, both of which lead to the same state of loneliness. And it is this conflict — this inability to come to grips with who he is — that defines him.

Men in My Situation is fraught with tentativeness, for Arvid never seems to fully grasp anything or anyone he encounters. This is illuminated by Petterson’s use of first-person narration, which gives the reader a window into Arvid’s state of mind. The prose is as hesitant as our protagonist:

“It smelled empty. As if someone had been there who was not there anymore. To feel that empty there must have been someone there first. It didn’t cross my mind that it was us. I walked through the living room and out into the kitchen and put the kettle on for coffee. I tried to think of her. I sat down at the living-room table with the cup of coffee and thought about how I looked forward to her coming home again, but I didn’t know if I did. On the table there was a list of things I was supposed to do while she was away. She had made it, I picked it up, sat like that for a while, as if I was reading, and put it down again.”

The book is so filled with refences to Oslo and its surroundings that it feels like a map. Though Arvid knows each street, neighborhood, and region, he wanders through the landscape as if in a maze. At first glance, the geographic specificity seems gratuitous; ultimately, it creates the vivid sense of displacement that embodies Arvid’s feeling of loss. He is a man in search of something he cannot find.

Men in My Situation is superbly written and expertly translated. The language flows and seems quite natural — almost simple — yet is filled with richness and complexity. Per Petterson does not disappoint.

By Terry Pratchett and Stephen Baxter