Memento Mori: A Crime Novel of the Roman Empire

Murder and deceit are afoot in Ancient Roman Britain. 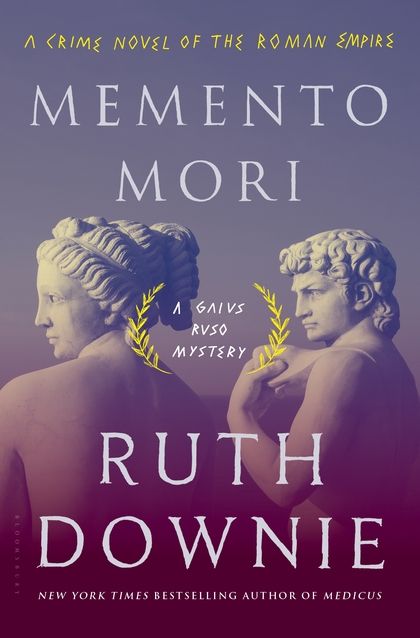 Ruth Downie brings back Medicus Ruso and his wife, Tilla, for their eighth adventure investigating murder in the Roman Empire in the second century AD. Think of Ruso and Tilla as ancient predecessors of Nick and Nora Charles, without the constant drinking.

At the time of Memento Mori, Ruso is an ex-army doctor now married to his former British slave, the fair-haired Tilla. Ruso’s former clerk, Albanus, arrives at Ruso’s home one morning to tell him that his best friend and colleague, Valens, is wanted for the murder of his wife, Serena, whose father-in-law, Pertinax, is their former legionnaire commander. Pertinax is out for Valens’ head and doesn’t much care for how he gets it.

Valens, who is in hiding from his vengeful father-in-law, has sent Albanus to ask for Ruso’s help in clearing him of the murder charge. Ruso packs up his household, which includes Tilla, their new adopted daughter, Mara — whose biological mother happens to be Virana, Albanus’ wife — and their two slaves, Narina (Mara’s nanny) and the inattentive Esico.

(Don’t worry, Downie has helpfully included a dramatis personae at the beginning of the book so that the reader can keep track of the players and their relationships.)

After an uncomfortable sea voyage, Ruso and his retinue arrive in Aquae Sulis (modern-day Bath), the scene of the murder. Leads are scarce, and Valens is of little help. Serena, Valens’ murdered wife, appears to have been having an affair with Terentius, an apprentice engineer working to maintain the sacred hot-spring bath of the goddess Sulis Minerva. Most importantly, the priests serving the site have suppressed the fact that Serena’s body was discovered in the water. This knowledge could potentially destroy the bath’s appeal to tourists.

Ruso soon learns that Valens knew of the affair and had argued with Serena about it, providing Valens with plenty of motive for murder. And Valens’ fleeing with his twin boys before he can be arrested doesn’t help his case.

Ruso’s investigation is complicated by the hostility of Pertinax, his brother, Catos, and their retinue of veterans; the secretiveness of the priests; the missing Terentius; the possibility that a fatal hotel fire on the same night of the murder is connected to it; and the wild British priestess Gleva, Pertinax’s lover who may have bewitched him with a love potion to thwart Serena’s objections to their union.

That Ruso, ably assisted by Tilla, successfully untangles all of these threads and identifies Serena’s killer is a foregone conclusion, but the telling of the tale is wonderfully done. It is full of charming and delightful characters — especially the resourceful and clever Tilla — and of incident leavened with the right amount of humor.

Downie’s Ruso joins Steven Saylor’s Gordianus the Finder and Lindsey Davis’ Falco as amateur detectives in ancient Rome. Gordianus walked the empire’s mean streets about 200 years prior to Ruso, while Falco investigated crimes only a generation or two before Ruso.

Saylor, as an historian, sets many of his stories within the context of actual historical events and maintains a more serious tone than either Downie or Davis. Downie’s comparatively lighthearted style falls somewhere between Saylor’s somber approach and Davis’ wise-cracking adventures.

Fans of Saylor and Davis who like their historical fiction enlivened by a well-crafted puzzle should enjoy Downie’s engaging series.