Mayday 1971: A White House at War, a Revolt in the Streets, and the Untold History of America’s Biggest Mass Arrest 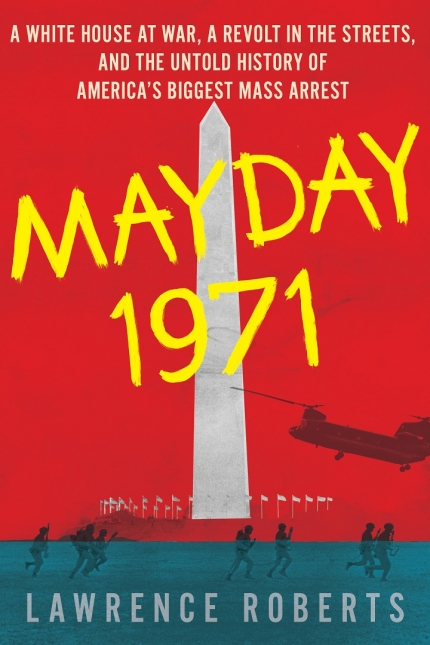 In 1971, the Vietnam War was raging. This unpopular conflict had already involved 550,000 soldiers and would later result in at least 58,000 casualties. The draft threatened every young man not yet in uniform.

The war had driven Lyndon Johnson from the presidency (“Hey, hey, LBJ, how many kids did you kill today?”), and now Richard Nixon was at the helm. He campaigned to stop the war while secretly expanding the fight into Cambodia and Laos (“I’m not going to be the first American president to lose a war”).

In Mayday 1971, author Lawrence Roberts, an investigative reporter for the Washington Post and other papers, relates the shameful story of what happened that year like a mystery writer. He even conveys firsthand experience as an arrested protester. Fortunately, Roberts is also a careful historian. He pinpoints the origins of this extraordinary drama and guides readers through the score.

Roberts begins with an introductory timeline and then weaves together the events and personalities as they unfurl prior to and after May 1st. His valuable book boasts impressive research, extensive footnotes, and a useful bibliography.

In Washington, DC, and around the country, war and draft protests had been staged since 1965. Yet the war slogged on. During this same period, the country had been severely traumatized by the assassinations of Martin Luther King Jr. and Robert F. Kennedy, the My Lai Massacre, the release of the Pentagon Papers, and the Kent State shooting of student protesters.

On March 1, 1971, the Weather Underground exploded a bomb in the U.S. Capitol. Plans for a massive protest to shut down the entire federal government followed. The idea caught on. Over the next few weeks, hundreds of thousands of people from all around the country streamed into DC to engage in a non-violent protest of the war. The movement included former soldiers, as well as outraged civilians of all ages and backgrounds.

Leading the pack were the Vietnam Veterans Against the War (VVAW), U.S. National Student Association, People’s Coalition of Peace and Justice, National Peace Action Coalition, and the Black Panthers.

Because the pending protest was no secret, both sides were ready. The protesting groups were not closely synced, but they had done their homework. They mapped the city and identified the most vulnerable spots.

Since surveillance was critical, spies were used by both sides. The police used academy hopeful John O’Conner to infiltrate the protest groups and report back. He successfully joined the inner circles and became a top leader of the VVAW.

The protesters on May 1st were confronted by thousands of members of the DC Metropolitan Police, several federal police forces, the DC National Guard, and the 82nd Airborne. Using any means whatsoever was the unspoken but implied mandate: Get the mobs off the streets and out of town. Thousands were quickly arrested without charges or pretense of any legal justification.

An estimated 200,000 to 500,000 people had come to DC the week before, with 35,000 protesters joining the May Day demonstration. They blocked traffic on streets and bridges, and noisy demonstrations were aimed at the Capitol, the White House, and the Supreme Court.

To symbolically underscore the message, veterans returned their combat medals to the steps of the Capitol. After a high fence was placed at its steps, some dramatically threw their medals over the fence.

Taking a page from King and Gandhi, the participants were instructed not to resist. When confronted, they allowed themselves to be arrested. The unrestrained police actions resulted in the largest mass arrest in U.S. history: Over 12,000 men, women, and some children were swept up, and at least 7,000 were detained.

With inadequate space to house those arrested, an uncovered football practice field, the Washington Coliseum, and an outdoor jail yard were employed. Many of those arrested were detained for several days in open fields. Despite the cool nights, they lacked blankets, clean clothing, bathrooms, and adequate food.

Mayday 1971 describes how thousands of U.S. citizens were unlawfully detained and abused while exercising their First Amendment rights. The incident resembled the 1968 riots following the King assassination and the Chicago Police riot, though without those events’ bloodshed or death.

Many protesters were informally released, but some acquired a permanent police record that affected their careers. After extensive litigation, an order to destroy all the arrest records was issued in 1974. Unfortunately, the records’ actual destruction was not accomplished until July 30, 1987. The author’s personal May Day arrest record was finally eradicated in the ash pile.

Paul D. Pearlstein is a retired attorney living in DC. He is a former Army captain who witnessed May Day 1971 up close. By the time of the demonstrations, he had morphed from a hawk to a dove and was representing draftees.

Cross-Examining History: A Lawyer Gets Answers from the Experts about Our Presidents