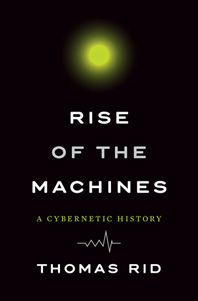 Thomas Rid's Rise of the Machines: A Cybernetic History couldn't have appeared at a more fortuitous time. John McCain, chairman of the Senate Armed Services Committee, is threatening the senior executives of Apple and Google with subpoenas to testify as to why their smart devices are so encrypted that law enforcement and intelligence agencies can't access the data they contain.

At the same time, Congress is about to raise the status of Cyber Command to an independent, standalone warfighting entity. Defense Secretary Ash Carter is pushing it to move faster in developing offensive tools to take on nation states (think Russia, China, Iran, North Korea, to name a few) and "non-state actors," like radical Islamists and international criminal syndicates.

And don't forget the hackers who could take control of your Jeep Grand Cherokee. Huddling in Detroit in late July were auto executives like Mary Barra of General Motors and Anthony Foxx, the secretary of transportation, and dozens of other trade and government officials "to highlight what car companies and policy makers can do to meet the challenge" of highway hacking.

Rid, a professor of security studies at King's College, London, skillfully catalogues the tension that has existed around "cyber" — a word that "refuses to be either a noun of prefix." As he states in the preface, the book is his "attempt to disentangle seven distinct cybernetic narratives." Rid meets that challenge in an engaging and thoughtful manner.

"Cybernetics" is a word coined by Norbert Wiener of the Massachusetts Institute of Technology for his 1948 work, Cybernetic; or, Control and Communication in the Animal and Machine, a surprise bestseller.

Telling the story of cybernetics through Wiener for the first decades of this revolution is appropriate and compelling. Wiener's early attempt to solve the an "air defense problem" was a failure, but his continued pursuit of man-machine interface was groundbreaking and epochal. To this reviewer, he was searching for utopia in an often dystopian world.

British inventor Ross Ashby advanced the study by saying the question wasn't what was this machine, but instead what does it do. "Cybernetics wasn't about mechanics; it was about behavior," Rid writes.

And where did this observation lead two decades later?

"To the surprise of the remaining founders, cybernetics lived on — not in Boston's scientific research labs, but in California's counterculture communes."

Stewart Brand, the creator of The Whole Earth Catalog, gave us his unique "access to tools" publication with more than a fistful of reviews on cybernetics. Through its updates and supplements, Brand turned the catalog itself into a tool of access, dynamic and self-regulating because he encouraged feedback from a global community to maintain its equilibrium.

Brand adopted a holistic philosophy from anthropologist Gregory Bateson in viewing cybernetics, and described the new frontiers of artificial intelligence found in early video games, such as "Spacewar."

As Brand wrote in Rolling Stone, "Ready or not, computers are coming to the people." Then the kicker sentence, "That's good news, maybe the best since psychedelics." That's a cue for Rid to take a good look at Timothy Leary, the onetime Harvard lecturer and researcher, who became the face of the franchise of psychedelics and their impact on the human brain.

"Leary's language resonated with an emerging subculture." A member of the Grateful Dead pegged him as "a reverse canary in the coal mine." That is just a taste of what this book has to offer. Its only drawback is lack of a bibliography or bibliographic essay.

Rid's Rise of the Machines belongs on the same bookshelf as P.W. Singer's now classic Wired for War: The Robotics Revolution and Conflict in the 21st Century.

Having begun this review with tensions over cyber in today's news, the last word belongs to Rid: "Two sharply different communities seized on the myth of cyberspace as the new frontier: Coast privacy activists and the East Coast defense establishment. For the former, cyberspace was a space of freedom; for the latter, it was a space of war."

The Rise of the Machines shows all of us how we arrived there.