March 1939: Before the Madness−The Story of the First NCAA Basketball Tournament Champions

A thoughtful look back at the origins of March Madness. 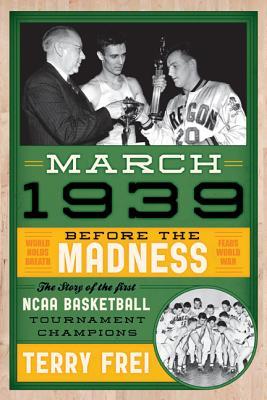 Bracketology, the Big Dance, March Madness pools, the Sweet Sixteen — these are all terms that are associated with perhaps the most famous tournament in U.S. sports, the NCAA Basketball National Championship. Indeed, millions of people with only a passing interest in basketball get caught up in the excitement of filling out a bracket. Their aim is to predict the winner of each game from 63 contests played to crown a champ. In 2014 a perfect slate could earn a billion dollars from Quicken Loans.

In 1939, however, success was certainly not a sure thing for an eight team tournament that lost $2,500 in the first year. Author Terry Frei examines that first year in his book March 1939: Before the Madness − The Story of the First NCAA Basketball Tournament Champions. He believes that the Oregon Webfoots are the true national basketball champs from that year because “the Webfoots’ tournament was part of a sincere effort to pick a champion from all regions of the country.”

Frei is an Oregon native whose father coached football for 17 years at the University of Oregon — the school whose team won that first tournament. As a sports writer for the Denver Post and the author of six other sports-themed books, Frei demonstrates great attention to detail while placing his subject squarely in the events of the day.

In March 1939, Frei is quick to point out that the National Invitation Tournament (NIT) predated the NCAA event by a year; then he makes the case as to why the 1938 event was not a true test to determine the best basketball team in the land. In 1934, New York promoter Ned Irish floated an idea of matching local college teams with national squads at Madison Square Garden, which became a six team tournament in 1938. What undermined the purity of that first invitational tourney, for Frei, was the hucksterism of the New York writers who had “founded, sponsored, and promoted it…to the point where they sometimes came off as carnival barkers.” To that end, Frei argues that the field promoted in March 1939 by the National Association of Basketball Coaches (NABC) was a purer event. The NCAA sanctioned the event with the proviso that the NABC assume all financial responsibility. That caveat ended up as a sweet deal when, due to the losses following poor attendance, the NCAA offered to make up the deficit in exchange for gaining control of all future tournaments.

That Long Island University played Loyola in 1939 in front of a packed Madison Square Garden, as opposed to Oregon playing Ohio State in front of a small crowd in Evanston, IL, proved that having a local bent worked for the NIT, at least economically, even if the NABC could lay claim to a more righteous champion in its event.

A book like March 1939 can fast become a litany of game highlights and box scores. Frei smartly breaks up the monotony with tidbits about what was going on in the world at the same time as the sporting events. “With the eagerly anticipated epic ‘Gone With The Wind’ five weeks into its filming, movie critics…are speculating whether it was wise to cast a British actress, Vivien Leigh, in the role of Scarlett O’Hara.”

Light segments, however, are far outnumbered by news accounts of the gathering storm in Europe due to the Spanish Civil War and the Nazi plans for world dominance. It is these non-sport bits that make Frei’s book more than just jock talk. “All along, I was determined to place the Webfoots’ accomplishments in the context of the college basketball scene, the country, and the world of 1939.”

Frei bookends March 1939 with the history, before and after 1939, of the young men and coaches who made up the Oregon squad. Frei depicts these “Tall Firs” as charming small town Americans (David to the national power Goliaths) through skillful word play and research. There’s a sense of pride at the end of the book for these gentlemen who went on to make their world a better place. Perhaps this (besides the obvious betting angle) is what makes March Madness so fascinating: that a small school Cinderella team can rise up and beat a much bigger opponent.

Of course, that usually destroys most people’s brackets for the year.

George W. Krieger is a Colorado family dentist who has been published in the Pueblo Chieftain, Goldmine Magazine, Discoveries, Beatlefan, Music Hounds and the Journal of the Colorado Dental Association. He has written papers about western history that have been published in the Brand Book of the Denver Posse of Westerners and contributed to two books about Red Rocks Amphitheatre in Colorado.