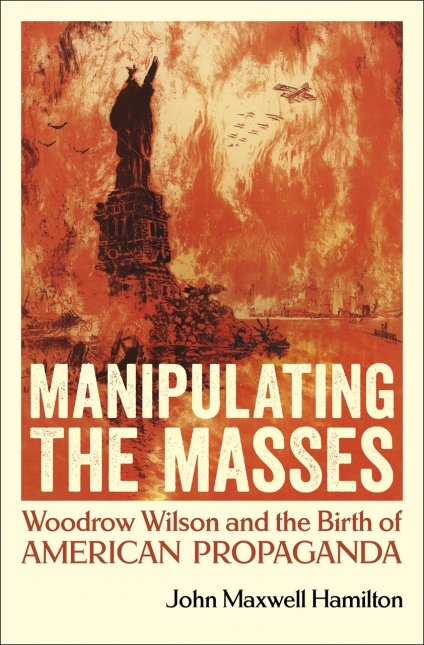 It didn’t start with Russian bots on Facebook or Donald Trump’s rampaging Twitter feed. Governments and politicians have been trying to shape public opinion ever since the opinions of common people began to matter. But it wasn’t until World War I — when the concern for mass appeal was married to modern communications and a new understanding of what moves people — that official propaganda really took off. So argues John Maxwell Hamilton in his well-researched, evenhanded Manipulating the Masses: Woodrow Wilson and the Birth of American Propaganda.

Although leaders as far back as Napoleon and Queen Elizabeth I took care to mold their public image, Hamilton holds that it was only in the early decades of the 20th century that the art became an industry. As is often true, war accelerated an existing process so that, by the Armistice in 1919, “publicity” and propaganda had become indispensable elements of statecraft.

The European powers, who fought the Great War for almost three years before America joined in, got a head start. Given the shared language and heritage of those in charge of both countries, it’s not surprising British propaganda in the U.S. was particularly effective, especially in comparison to the ham-handed efforts of the Germans.

What became America’s war-time propaganda techniques had a dry run in Wilson’s reelection campaign of 1916. Beneficiary of a split opposition four years earlier, Democrat Wilson now faced a unified Republican party. His team secured him a second term by creating a publicity juggernaut: spewing out press releases, organizing speakers’ bureaus, and even making use of the new technology of film.

Hamilton offers a nuanced portrait of Wilson, a former icon of international Progressivism and the Democratic Party who, because of his overt racism, has recently fallen into deserved disrepute. Though an intellectual (he was the first president to earn a Ph.D.), he interpreted the world more through moral principle than rational inquiry. His resulting ethical certainty made him stubborn and imperious, bad traits in a politician hoping to achieve great new things.

America’s propaganda bureau was formed on the fly and without congressional input or oversight. The innocuous-sounding Committee on Public Information (CPI) emerged by executive order with a former muckraking journalist, the brilliant and unfocused George Creel, at its head. While Creel’s energy and creativity inspired his staff, his flamboyant style and thin skin infuriated his critics, of whom there were soon many. But he was on a war-time mission: “America must be thrilled into unity and projectile force.”

In the relatively short span of America’s participation in WWI — just over 18 months — the CPI grew into a propaganda behemoth with offices around the world generating daily bulletins, advertisements, cartoons, and even films. The “Four Minute Men” was a contingent of volunteer public speakers eventually numbering almost 75,000 who gave short, punchy, patriotic speeches during intermissions at movie theaters and other gatherings.

The committee was aided by new professions with shady reputations — advertising and moviemaking — seeking credibility through their association with the war effort. Meanwhile, academics could flee the ivory tower by lending their talents to the glamorous CPI.

Journalists simultaneously resented and relied on the CPI. It was an invaluable clearinghouse of war news, but it crowded out and intimidated independent reporting. The surname of the committee’s chief became a pejorative: “creeling” the news meant to twist or suppress it.

Unlike the European powers, with their history and acceptance of centralized power and without a First Amendment, the United States did not impose official domestic censorship. But the CPI had plenty of indirect methods for curbing dissent, including jawboning editors and reporters, and denying publishers use of the mail and the right to export their products.

Hamilton implies that the Progressive enthusiasm for propaganda reveals a dark side to the movement. Though in theory champions of intellectual freedom and personal liberty, the Progressives’ equally strong dedication to social virtues led them to pursue conformity and control. In the Progressive mind, once Wilson had branded the war a campaign to make the world “safe for democracy,” any resistance to it was rightly suppressed.

Ironically, the CPI had closed up shop just when its efforts were most needed: to sell to a skeptical American public Wilson’s idealistic dream of a League of Nations, part of the treaty ending the war.

Manipulating the Masses contains many memorable lines — “The CPI shot propaganda through every capillary of the American bloodstream”; “[Creel] was as partisan as a campaign button” — but it also reflects the author’s zeal for mining the archives for long-buried correspondence and relationships. This leads to too many sentences with too many names that lack reminder titles or attributes. (“Newton Baker reassured Creel that Clarkson was sorry about the bad publicity, but Clarkson’s tepid public explanation did nothing to offset the impression left by Ellsworth.”)

There are also a few errors: for instance, $5 million in 1917 being excessively inflated to $850 million now; an instance of “infer” being confused with “imply”; and a meeting placed at the Shoreham Hotel before that structure was built. But these stumbles are minor.

According to Hamilton, the CPI kicked off an “Information State” that’s never stopped propagandizing. He recommends closer congressional oversight and an independent board to keep tabs on a government that’s continually trying to shape reality to its own purposes. But in the end, it’s up to all of us to maintain a healthy skepticism — even after a certain high-profile Twitter account falls silent.