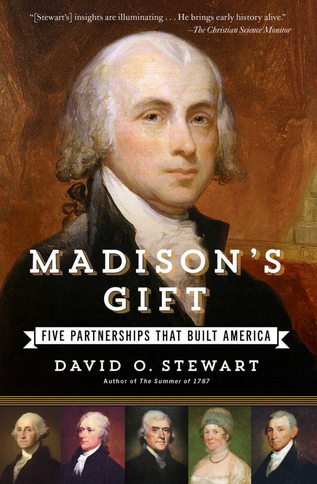 Today’s political landscape is awash with examples of gridlock, partisanship, and shameless self-promotion. It often seems the concept of statesmanship has become extinct. It is not surprising, then, that many Americans look to the past, particularly to the founders, for examples of leadership.

David O. Stewart’s latest book, Madison’s Gift: Five Partnerships That Built America, presents a fresh look at one of the most notable of that first generation of leaders. While many other writers have delved into the life of the fourth president — including, most recently, Lynne Cheney — Stewart has produced a work that synthesizes James Madison’s key relationships and how those principled interactions benefited the new nation.

This interpretative biography focuses on Madison’s collaboration with George Washington, Alexander Hamilton, Thomas Jefferson, James Monroe, and his own wife, Dolley. Each had qualities superior to Madison in one way or another: Washington had a commanding presence and attracted nearly universal admiration; Hamilton was a shrewd strategist and propagandist; Jefferson was the Renaissance man; Monroe developed keen military and political skills; and Dolley Madison had a gracious personality and a talent for putting people at ease.

Madison worked with them in various stages over 50 years to establish, maintain, and strengthen a nascent government. In a largely unassuming manner, he emerged as a pivotal figure at the Constitutional Convention; drafted the Bill of Rights; worked with Hamilton (and John Jay) on writing The Federalist Papers essays to secure ratification of the Constitution; advised Washington as he launched the presidency; served Jefferson as a political ally and secretary of state; and worked with his secretary of state (and war), Monroe, to steer the United States through perilous times.

Stewart, a Washington, DC, attorney (and president of the Washington Independent Review of Books), is familiar with this period. Among his five books are those on the Constitutional Convention and Aaron Burr, the controversial politician and Madison’s Princeton classmate. For Madison’s Gift, he extensively researched primary sources, including The Papers of James Madison, along with many respected secondary sources.

The result is a sparkling, well-written work that tells a balanced story of a man who worked diligently with his contemporaries for the greater good. The reader comes to appreciate that Madison, while less celebrated than some of his peers, was crucial to early America’s success. Vignettes about Madison’s colleagues are an added bonus.

Stewart tells how these relationships began, blossomed, and, in the case of Washington, diminished (and with Hamilton, was extinguished). For two years, Madison was estranged from Monroe, but the relationship was rekindled and grew in importance.

Among the most interesting parts of the book is the discussion of Madison’s work on the Bill of Rights. Also notable is the chapter that presents Madison as the nation’s de facto prime minster at the outset of the Washington administration; he would later be superseded by Hamilton. The sometimes tug-of-war in Madison’s mind between his attraction to the nation at large and to Virginia is illuminating.

One of the chapters on the Madison-Monroe relationship explains how the War of 1812, the second war with England, represented both a failure of diplomacy and the need to assert American honor. Despite the unpopularity of the war and the destruction of the capital during the conflict, “Peace brought Madison a popularity he never before enjoyed.”

Stewart does not deify Madison. He is presented as a flesh-and-blood public official, sometimes great, sometimes contradictory, and even intellectually expedient. Nowhere is Madison’s thinking more contradictory, as with many of the founders, than on the issue of slavery. Madison, the Father of the Constitution, recognized the evil of it, as well as the challenge it posed to the nation. Yet he was vexed by how to end it, possibly because his lifestyle was built on its existence. Madison did not manumit his slaves at his death.

The book ends with a section on Madison’s 40-year marriage to the widow Dolley Payne Todd. He married late, but this partnership was clearly the greatest of his life. Dolley provided him with loving companionship while serving as his informal ambassador. Her devotion to him, particularly in his declining years, is heartwarming.

Aside from the Constitution, the co-authorship of The Federalist Papers — especially essays 10 and 51 — remains perhaps Madison’s most enduring contribution. In his essays, he articulates not only an incisive civics lesson on American government, but provides a guidepost for contemporary political figures. And, certainly, his willingness to selflessly work with key leaders can be instructive for the 21st century.

James Madison is a hero for our times, and David O. Stewart nimbly re-introduces us to him.