After Steve: How Apple Became a Trillion-Dollar Company and Lost Its Soul

A fascinating peek behind the iCurtain. 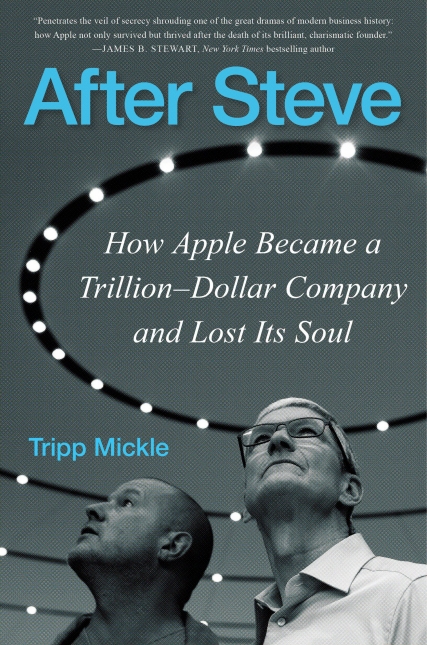 When Steve Jobs died of pancreatic cancer in October 2011, many wondered how Apple would survive without him. Jobs was Apple’s unquestioned leader and ran it with a hands-on, intuitive approach that prioritized high-quality design over more conventional business concerns such as cost and practicality. The company had experienced life without its cofounder before — in 1985, Jobs was ousted in an internal power struggle — and had been saved from ruin only by Jobs’ return.

Wall Street Journal reporter Tripp Mickle tells a compelling story of how Apple evolved after Jobs’ death not only to survive but to grow into the world’s first trillion-dollar company. The narrative in After Steve is driven by the experiences of two Apple executives destined to play key roles in Apple’s progression: Tim Cook, chosen by Jobs to succeed him as CEO, and Jony Ive, Apple’s design chief. Centering the book on these personalities makes it interesting and accessible to general readers without a business or technical background.

The differences between the two men are stark. British-born Ive is the epitome of a craftsman, obsessed from an early age with the aesthetics of design and the mechanics of equipment. A prodigy who won prestigious design awards while still a student, he started at Apple in 1992 after impressing the company with his design of a tablet and his incorporation of its packaging into the user experience.

Ive relentlessly sought to marry beauty and simplicity in a drive to break boundaries in design. Jobs (who was reinstated as CEO in 1997) was similarly focused on the importance of design; he and Ive formed a legendary creative partnership. At the time of Jobs’ death, Ive was known as Apple’s “high priest.”

Cook, contrasting sharply with Ive, is an Alabaman shaped by his education in industrial engineering at Auburn University. An unassuming fellow who was virtually invisible in his classes, Cook made his mark at IBM, Intelligent Electronics, and Compaq before being lured to Apple. His genius was in reinvigorating struggling companies by cutting costs, fixing logistics systems, and controlling inventory.

Apple hired Cook in 1998 to help turn around its supply-chain woes. Reflective and analytical, Cook’s problem-solving approach was the opposite of Jobs’, which was driven by intuition. Yet, when the time came for the dying Jobs to hand over Apple’s reins, Cook was the person he chose to carry on his legacy.

Without Jobs to provide guidance, Ive and Cook grappled with determining the company’s direction. The Apple brand had long been defined by its ability to continuously generate transformative technologies, and the company sought to maintain that tradition. It invested heavily in developing game-changing devices such as a driverless car and a watch that functioned as a health monitor, communications device, and fashion statement. Both efforts were scaled back when the goals proved too lofty for the technology.

While still attempting leaps of innovation, Apple simultaneously doubled down on exploiting the value of its existing products (especially the iPhone), including turning to China as a source of skilled but inexpensive engineering talent and a gigantic new market for Apple products. It also increasingly relied on selling services (such as Apple Music) instead of the elegant and cutting-edge products that traditionally typified its business.

Author Mickle does an impressive job of penetrating Apple’s culture of secrecy — maintained via legal action taken against those disclosing its activities — to obtain the firsthand accounts that are a strength of this book. His detailed narrative is informed by interviews with more than 200 current and former Apple employees, as well as their relatives and friends, suppliers, government officials, and competitors.

He also draws on the vast array of news articles, books, court filings, and video and audio recordings produced about Apple over its decades of existence. Also impressive is Mickle’s ability to describe technology in such a way that the lay reader can visualize it. For example, the tower of the Power Mac G5, he tells us, “was the width and height of a paper grocery bag…framed with front and rear panels that featured tiny holes like those in a citrus zester.”

The result of Mickle’s efforts is a captivating story that holds the reader’s attention in spite of the book’s length. Insightful accounts of contemporary events, such as Apple’s struggles with the Justice Department in 2015 over unlocking the San Bernardino shooters’ iPhones and Cook’s efforts to navigate a relationship with the protectionist President Donald Trump, add to the dynamics of the story. In After Steve, Tripp Mickle has done a great job chronicling the evolution of one of America’s seminal companies.