This thriller isn’t for the faint of heart (or stomach), but it might be the perfect read for quarantine. 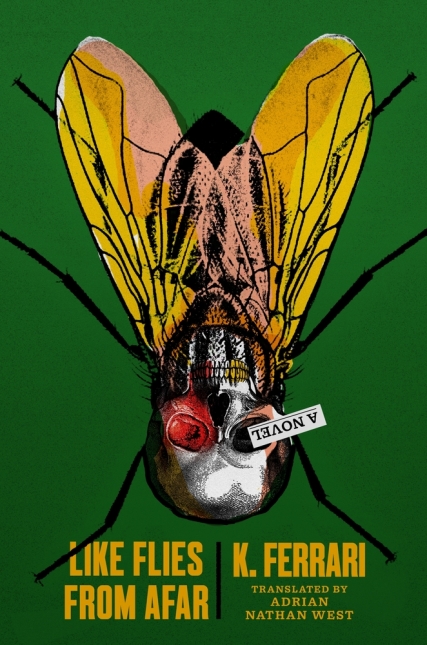 On the very first page of K. Ferrari’s Like Flies from Afar, Argentinean oligarch Luis Machi is receiving oral sex from one of his many sex partners, in this case, a “blond bimbo.”

Machi is a middle-aged “self-made man” who has accumulated a contemptible fortune by consorting with the dregs of society, who run the gamut from drug dealers and assassins to crooked cops and politicians.

He is a ruthless, unprincipled businessman who crushes anyone in his way and spends much of his time snorting cocaine. He dresses ostentatiously (he has 300 ties), has millions in the bank, and treats people, especially women, like chattel. He has ruined many lives. Some who have crossed his path have simply “disappeared.”

His friends are an equally despicable lot.

What follows in this slim story (it clocks in at about 50,000 words) is a profane and often hilarious tale of how Machi deals with the problem during a span of 24 hours. There’s the corpse to be disposed of, and it’s no easy task, as it involves, among other things, a power saw, lots of blood and vomit, and, not surprisingly, a change of clothes.

There are plenty of flashbacks and ruminations as Machi tries to figure out who dumped the body. Since his enemies could fill a soccer stadium during the World Cup, he is in a bit of a quandary. Topping the list of possible culprits is Cesspit Pereyra, a psychopathic killer and Machi’s pet assassin. But the increasingly paranoid Machi (the cocaine doesn’t help) also suspects his friends, as well as his own long-suffering wife and children.

Machi lurches from one Buenos Aires neighborhood (and disaster) to another. If Like Flies from Afar is representative of life in South America, it’s no wonder people there flock to the U.S.

K. Ferrari, the author of several novels, was deported from the U.S. years ago and now works as a janitor for the Buenos Aires metro. He can turn a phrase — his descriptions and characterizations are trenchant and sometime hilarious.

Like Flies from Afar has been translated by Adrian Nathan West, a writer and literary critic based in Spain who apparently doesn’t blush easily. There is enough profanity, perversion, and viscera here to make a slasher-movie director ecstatic. Expect to see the book on a big (or small) screen eventually.

Part detective story, part noir thriller, and part riff on everyday corruption both personal and political, Like Flies from Afar is a hard book to like, dealing as it does with such loathsome characters.

However, it’s ideal for reading during a pandemic. You won’t want to socialize with anyone after finishing it.

Lawrence De Maria is the author of more than 20 thrillers and mysteries, all available on Amazon in print and e-book form. He writes a regular column, “The Write Stuff,” for the Independent.

House of Gold: A Novel

A family saga of love and wealth in WWI-era Europe.