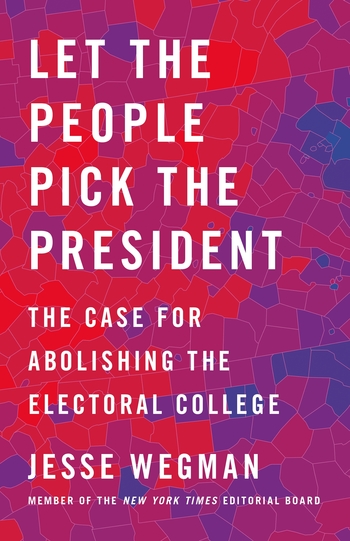 The Electoral College has never worked as the Framers envisioned and does not work today in the way its supporters contend. Those are perhaps the two most important conclusions that Jesse Wegman, an editorial writer for the New York Times, offers in Let the People Pick the President, a thoroughly researched and forcefully argued attack on the odd system enshrined in the Constitution for selecting the president of the United States.

Wegman, of necessity, quotes Alexander Hamilton’s description of the system in Federalist No. 68 as better than direct election because the electors, chosen by popular election, would be “men [sic] most capable of analyzing the qualities adapted to the station” and would then likely choose for the office “characters pre-eminent for ability and virtue.”

But he dismisses Hamilton’s claim that the system enjoyed widespread popularity when written and, as rebuttal, quotes the present-day constitutional scholar Jeffrey Rosen as describing the system as “a Frankenstein’s compromise.”

History shows, of course, that the electors have never convened as a body to deliberate and exercise independent judgment in choosing the best man for the office. To the contrary, the practice evolved quickly that electors were expected to cast their ballots, in their respective state capitals, just as their states had voted. Electors who vote differently — around 165 through history — have been tagged with the pejorative label “faithless electors.”

Today, most states have laws requiring presidential electors to vote in accord with the popular vote in their states and, with rare exceptions, they do — precisely because they have been selected by their respective political parties based on their party loyalty rather than independent judgment. The Supreme Court is set to hear two cases, one from Colorado and the other from Washington, testing whether a state can penalize electors who violate the pledge to vote in accord with the state’s popular vote.

Before turning to editorials, Wegman was a reporter at various news organizations, and his experience as a journalist shows in the book. He breaks some news by disclosing that the Bush campaign was worried enough about Florida in 2000 that it looked into the possibility of flipping a few of Al Gore’s electors to eke out an Electoral College majority. Thanks to the Supreme Court, the strategy proved unnecessary.

Wegman adds some details about the failed effort in 2016 to recruit so-called Hamilton electors from red states to break away and deny Donald Trump the Electoral College majority that he appeared to have won on Election Night. With that strategy failed, Wegman pronounces the Electoral College a proven failure. “The Electoral College picked the person it was literally designed to keep out of office,” he writes.

Trump himself once endorsed popular vote for president, Wegman notes, but Trump backed off for fear that small states would be ignored. In that vein, Wegman shows that under the winner-take-all electoral system, most states — and their millions of voters — are ignored right now because candidates target a handful of “battleground states.” Republicans write off blue states like California and New York, while Democrats write off red states from the Deep South to the Mountain West.

Wegman quotes Indiana’s former Democratic senator Birch Bayh, who sponsored a constitutional amendment in the 1970s that cleared the House but died in the Senate at the hands of a filibuster by Southern Democrats. In a popular election, Bayh said back then, “candidates would go to where the votes are, and that is everywhere.”

Indeed, Wegman quotes current campaign operatives as confirming that a popular-vote system would force presidential candidates to campaign nationwide. If every single vote counts, you pay attention to every single vote.

With views now divided sharply along partisan lines, the prospects for a constitutional amendment have all but disappeared. But Wegman favors the current effort to get around the Electoral College by committing a sufficient number of states to cast their electoral votes for the national popular vote winner, regardless of the popular vote in the state itself.

As of now, 15 states, with 196 electoral votes, have signed on, but Republican opposition has stalled the progress needed to reach 270. Republicans are fully aware that they have won a popular-vote majority only once in the last seven presidential elections; Bush and Trump are the fourth and fifth to win the office after losing the popular vote, along with John Quincy Adams and two 19th-century Republicans, Rutherford B. Hayes and Benjamin Harrison.

Wegman reminds readers that the Framers adopted the Electoral College system precisely because of a fear of “democratic excesses.” The arc of history, Wegman recounts, has bent toward wider and wider voting rights: African Americans with the Fifteenth Amendment; women with the Nineteenth; young people with the Twenty-Sixth. He sees a national popular vote as the logical culmination of that trend.

Time will tell, but as Yogi Berra famously remarked, the problem with predictions is that they are in the future.

Kenneth Jost is author of Trending Toward #Justice and the annual series Supreme Court Yearbook. He is a graduate of Harvard College and Georgetown Law School and has covered law and justice as reporter, editor, or columnist for more than 40 years. He has endorsed a popular-vote election for U.S. president on his blog, Jost on Justice.