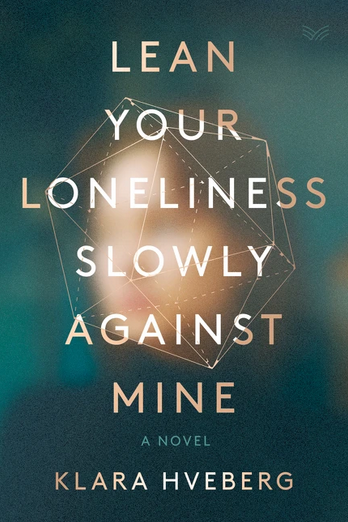 Debut novelist Klara Hveberg is also a mathematician. She wrote her doctoral dissertation on fractals and introduces Lean Your Loneliness Slowly Against Mine by quoting Store Norske Leksikon’s definition of them: “An umbrella term for structures and patterns that are the same regardless of size — they have self-similarity and are independent of scale.”

Hveberg structures her book itself almost as a literary fractal, replete with repetitive, reflective, and refractive patterns, characters, episodes, and themes. To begin, we have a mathematician writing a novel about mathematicians. It gets more complicated from there.

Narrator Rakel, a fictional modern-day mathematician, is fascinated by real-life Russian mathematician Sofia Kovalevskaya, who, in the late 19th century, was the first woman to become a mathematics professor. Rakel increasingly identifies with Sofia, believing the pattern of her own life and work resembles and reflects that of the celebrated trailblazer. As she tells her own story, Rakel intertwines it with Sofia’s.

The novel opens as Rakel, a prodigy with a passion for math, enters university in Oslo. In her first semester, she falls in love and into an obsessive decade-long affair with her much older, married professor Jakob. Her other great obsession becomes Sofia — and Rakel’s perception of their similarity: both musically gifted, medically frail, involved with older men.

Rakel increasingly and obsessively identifies with Sofia, and the novel itself becomes a dense, repeating pattern. Monologues in Rakel’s voice about her own life alternate with pages of related, lengthy, and detailed exposition about Sofia.

Although the prose is beautiful, approaching poetic, Rakel’s presentation of Sofia’s biography is didactic. Even when chronicling her own life and affair with Jakob, Rakel’s tone is often intellectualizing, idealizing, distancing. The cumulative effect of the volume of exposition, the narrator’s tone, and the repetition is a sluggish pace and diminished dramatic tension.

This may represent an intentional artistic choice by Hveberg as she attempts the challenge of crafting a novel which is both structurally daring and beholden to technical knowledge and historical facts. Problematic? Yes. But this is a novel by a mathematician and about mathematicians. Mathematicians (as Rakel says) take on, study, and attempt to solve problems.

Initially, and most interestingly, Rakel is focused on math problems. Unfortunately, her original passion for the discipline is soon sapped and displaced by her passion for Jakob. An unfaithful womanizer, he accurately describes himself as “a lout.” The once-spunky Rakel passively endures betrayals and disappointments, accepting his duplicity and dual (fractal) infidelity to herself and to his wife.

Winning him away from that wife becomes the problem she studies, the one she tries to solve for years. Rather than a mathematics wunderkind taking on a male-dominated profession, she becomes a more familiar character: a woman who loves the wrong man more than herself, more than her work. Rakel’s agency becomes ever more limited as she falls physically ill.

Rakel, like the novel itself, follows a traditional trajectory, at least to some extent. She reclaims her creativity and identifies what she believes to be her real vocation — not mathematics, but fiction. She decides to write a novel about Sofia, one informed by (and infused with) her own mathematical knowledge, musicianship, and personal philosophy.

“[T]ime is not a straight number line, but a coiled-up spiral? Where the centuries lie against one another…if you set your ear against the membrane you might hear vibrations from the other side, from those who were here before, and those who will come after.”

Hveberg notes in an afterword that despite the inspiration afforded by Sofia Kovalevskaya’s work and life, this book is “first and foremost a novel with all the freedoms this affords.” The reader may wish the novelist had granted Rakel the emotional strength to cut free from her depleting love affair sooner, permitting her to continue her important work and more fully reflect her idealized Sofia’s achievement.

Nevertheless, by introducing a new variable with Rakel’s new goal, Klara Hveberg offers in Lean Your Loneliness Slowly Against Mine an intriguing potential strategy for her protagonist’s problem of self-definition and achievement. Tapping into the power of creative imagination and the “freedoms this affords” might be key to the solution.