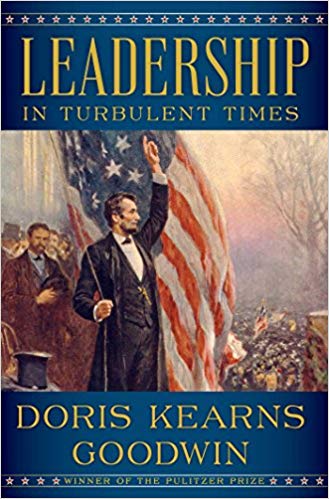 With the release of Leadership in Turbulent Times, Doris Kearns Goodwin has performed a feat of contortion even the great Houdini never attempted. She stands on her own shoulders. To execute such a dazzling move requires two traits: massive shoulders and unique powers of agility. In raising her newest historical analysis above her prior work, the esteemed historian proves she has both qualities.

First, the shoulders. It took Goodwin 36 years to develop hers through the rigorous exercise of writing four presidential-history classics: Lyndon Johnson and the American Dream (1977); No Ordinary Time: Franklin and Eleanor Roosevelt: The Home Front in World War II (1994); Team of Rivals: The Political Genius of Abraham Lincoln (2005); and The Bully Pulpit: Theodore Roosevelt, William Howard Taft, and the Golden Age of Journalism (2013).

All were blockbusters, and three won major literary awards. Those books put her on the short list of greatest living presidential historians; among Pulitzer winners, only she and Jon Meacham have gone deep with as many as four commanders-in-chief.

To successfully synthesize the lessons of four top-tier presidents’ lives in fewer than 400 pages, as she does here, is no small task. Goodwin meets the challenge by examining Abraham Lincoln, Theodore and Franklin Roosevelt, and Lyndon Johnson only “through the exclusive lens of leadership,” which she approaches by dividing their evolutions into three discrete segments during their surprisingly similar lives.

Though Mark Twain gets credit for having said, “History doesn’t repeat itself, but it often rhymes,” Goodwin’s analysis of her chosen presidents certainly confirms the adage.

Part One covers each man’s formative years. All came of age exhibiting larger-than-life personalities that relished connecting with crowds, allowing them to gain political success from their high sense of purpose, exceptional powers of concentration, and willingness to work long hours. Driven by ambition, each embraced the call to leadership early on, having already formed their essential identity and figured out exactly who they were and what they wanted.

By the end of this section, Lincoln and Theodore Roosevelt are leaders in their states’ legislatures; Franklin Roosevelt has had a successful run as assistant secretary of the Navy; and Congressman Lyndon Johnson is buddying up with his hero, FDR.

Part Two begins with the times in the men’s lives when their upward-mobility freight trains crashed into unexpected barriers and jumped the tracks. In 1840, for instance, Lincoln failed to fulfill his legislative agenda and broke off his engagement to Mary Todd, triggering a severe downward spiral that moved him to the brink of suicide.

On February 14, 1884, Theodore Roosevelt suffered a double-barrel grief — the deaths of both his wife and mother on the same day — that drove him to escape to the North Dakota Badlands for two years. In late August 1921, Franklin Roosevelt’s lower body suddenly became crippled by the polio virus, which took him off the political front lines for seven years.

And, in November 1941, Lyndon Johnson lost a special election for U.S. Senate, which, for a man obsessed with politics, became “a referendum on his self-worth which set in motion a protracted depression” that stayed with him until he won a Senate seat in 1948.

Such devastating reversals became what the author calls “crucible events” that enabled the men to prove they possessed the essential leadership trait of resilience. After weathering their storms, they bounced back to achieve levels of success that ultimately put them on the path to the White House.

Once again, the men’s respective experiences align. During their extended crucible periods, they found ways to reconstruct themselves, expand their gifts, clarify their purposes, and mature their voices. Though it took time, each managed to resurrect himself, knowing that only in politics could they fulfill their all-consuming desire to make lasting marks on history.

Part Three is where Goodwin’s most inspired shoulder-standing takes place, as she presents a graduate-school case study on each of the four presidents during times when, with great flair, they conducted a virtuoso performance at the helm of the federal government.

Long after their White House glory days have ended, these maestros still receive a standing ovation from the audience of history. Against all odds, they achieved their goals by pushing beyond all pre-conceived limits on executive power, allowing them to attain maximum long-term results.

Here, in the book’s final section, the author provides a step-by-step leadership analysis of how Lincoln unveiled and implemented the Emancipation Proclamation; how Theodore Roosevelt intervened in and mediated the nationwide coal strike of 1902; how Franklin Roosevelt attacked the Great Depression during his first hundred days in office; and how Johnson pushed through his civil- and voting-rights agenda. In all four instances, the United States had the right leader at the right time, per Goodwin’s exquisite analogy:

“Their leadership fit the historical moment as a key fits a lock. No key is exactly the same; each has a different line of ridges and notches along its blade. While there is neither a master key to leadership, nor a common lock of historical circumstance, we can detect a certain family resemblance of leadership traits, as we trace the alignment of leadership capacity within its historical context."

With jaw-dropping thoughts like this, Leadership in Turbulent Times is a bravura performance by Doris Kearns Goodwin, an artist who writes today with the same level of excellence that she’s demonstrated for more than 40 years.

Talmage Boston is a lawyer and historian in Dallas, Texas, whose most recent book is Cross-Examining History: A Lawyer Gets Answers from the Experts about Our Presidents (Bright Sky Press, 2016).