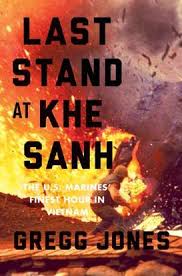 These were the words doctors and corpsmen said to the wounded at Khe Sanh, sometimes to keep them from panicking while they died.

In Last Stand at Khe Sanh, Gregg Jones recounts the battle with the naked honesty of the combatants who told him their stories. He interviewed ninety men who fought at Khe Sanh and scoured all other sources — books, reports, official records, films, recorded testimony — to produce a commanding history, so detailed it reads in places like a novel.

But Jones is a journalist (he was eight years old when the battle took place) and true to his calling: his own writing, as distinct from the men he quotes, is from beginning to end devoid of emotional language. He tells us what happened, nothing more, nothing less. Footnotes and bibliography run to more than forty pages, and he includes eight detailed maps. His cool, matter-of-fact approach makes the horror of the battlefield searing.

I was in Vietnam when the battle started, a civilian signals intelligence operative working covertly with military units in the field. I dressed like the soldiers and Marines I served with, ate c-rations by their sides, and slept beside them in trenches and tents. I followed the battle as it unfolded and shared with the Marines the fury at the decision to pull out of the base after so many had died defending it. So I can testify to the authenticity of Jones’ narrative. He captured the feel and jargon of men in combat in Vietnam. He even refers, as we did back then, to “the world,” meaning home, the U.S., as if the place we were in was not part of this world.

Most of the book is devoted to the action from January to April, when the siege was most intense. In the first twenty days of the conflict, the North Vietnamese won two battles, forcing U.S. and South Vietnamese troops out of Khe Sanh village and close-by Lang Vei, but they failed to take nearby Hills 64, 861, and 861 Alpha. We see close up the skirmishes, bombardments, hand-to-hand fighting. Jones offers an hour-by-hour, sometimes minute-by-minute, account of the action. He gives us graphic detail — one Marine on the ground with three bullets in his back, another dead with a bullet through his eye, another with a bullet-punctured lung, choking on blood, Marines carrying back their dead and wounded under murderous fire.

Jones devotes less time to the April-July period when the U.S. regained the upper hand, starting with Operation Pegasus during which U.S. Army units pushed through to Khe Sanh from the east opening up Route 9. The development displeased the Marines who, according to Jones, “had never wanted to be tied down at Khe Sanh in the first place and now bristled at the implication that the Army had to bail them out.” U.S. forces essentially recovered lost territory and gained supremacy. Then, on July 5, the Khe Sanh Combat Base was closed down by General Creighton Abrams who had replaced General William Westmoreland as the commander of U.S. forces in Vietnam. His decision was based on the conclusion that holding the remote territory would not help win the war.

In the epilogue to the book, Jones gives us a picture of the lives of the Marines who fought at Khe Sanh. Throughout the story, he has reminded us of how young these men were, something like half of them still teenagers. Many came home disabled by the loss of limbs or other permanent physical damage. Many suffered from Post-Traumatic Stress Injury, daily bedeviled by memories of the unspeakable. Some had their compasses shattered, as Jones phrases it, and never recovered. A few killed themselves. But most found a way forward to a productive and successful existence, even though they still see Khe Sanh as the defining moment of their lives.

Did the U.S. win or lose at Khe Sanh? What was the North Vietnamese objective in the campaign? Was it to recreate Dien Bien Phu, the 1954 debacle that ended French domination in Indochina? Jones lines up the evidence for opposing conclusions but does not offer an opinion. The issues are complicated by the Tet Offensive, launched between January 28 and 30, which Westmoreland believed was for the purpose of drawing troops away from the Khe Sanh battle. Others (myself included) are inclined to believe that Khe Sanh, like the equally inconclusive Dak To offensive in the highlands in late 1967, were part of an overall plan by North Vietnamese General Vo Nguyen Giap to keep U.S. forces occupied while the Communists concentrated on the political war at the village and hamlet level that eventually led to their victory. North Vietnamese statements on the subject are all but useless, riddled as they are with propaganda. We are left to ponder.

The abandonment of the combat base after so many had fought and died heroically to keep it out of North Vietnamese hands has made the story of Khe Sanh a defining symbol of the Vietnam War. Some 58,000 American service men died in Vietnam; North Vietnamese losses, perhaps triple that figure, are unknown. Yet at the end, we pulled out, leaving the South Vietnamese to cope as best they could with the conquerors.

Jones sidesteps the arguments about meaning and deliberately avoids the raging political arguments that go on even today about Vietnam. His purpose is not to deliver a judgment. Instead, he gives us a larger-than-life picture of Marines in combat. He shows us what so many of us have known, that combatants don’t fight for God or country or patriotism; they fight for the guy next to them. And he has gone a long way toward restoring respect and dignity for the men who fought and died in Vietnam and the men who were spat upon when they returned to the U.S. For that reason alone, his book is worth reading.

Yet readers like me, who devoted themselves heart and soul to Vietnam, are left with the question: was it worth it? Jones wisely doesn’t answer that question. He knows we have to answer it for ourselves.

Tom Glenn spent the better part of thirteen years trundling between the U.S. and Vietnam on covert intelligence missions and was evacuated by helicopter under fire when Saigon fell. His Vietnam novel-in-stories, Friendly Casualties, was published in 2012. Apprentice House of Baltimore just published his newest novel, No-Accounts.