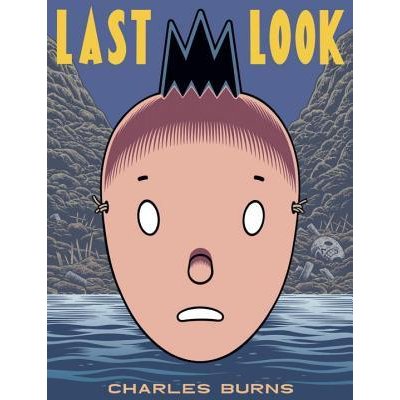 Charles Burns’ magisterial graphic novel Last Look opens with a young man waking from sleep in a windowless basement. “This is the only part I’ll remember,” he thinks cryptically, “The part where I wake and don’t know where I am.” He then follows a cat through a hole in the wall and emerges from it into a labyrinthine Casbah.

The reader gradually realizes that the man is actually asleep and caught in the unfurling logic of a dream. It is only pages later that he is identified as Doug, a twenty-something who lies in a suburban basement with his head bandaged, addicted to pain pills and unable to leave the house. How Doug ended up in this condition, and the meaning of his ongoing dream, are the mysteries that power the entire novel.

In his 2005 masterpiece, Black Hole, Burns combined teenage desire with the motifs of 1950s horror comics: The book followed a group of high-school kids who share a sexually transmitted disease that causes horrific mutations.

In Last Look, Burns continues to explore this surreal terrain, but ventures further into non-linear storytelling. The disorientation that the reader feels at the beginning of this novel continues throughout: we must constantly struggle to make sense of the stuttering, fractured narrative, while being swept away by a flood of hypnotic images.

Doug’s predicament, we learn, is related to a love affair. In panels that flash back some years, we see a younger version of Doug, cocky and long-haired (it is the late 1970s), at an art-punk party, where he is mesmerized by a quiet, shy classmate, Sarah. Her self-portraits, naked and bound in various S&M positions, seem to promise something that Doug needs.

“I wanted what I saw in her photographs…something dark and rich and new,” he muses.

Doug fancies himself as an artist, too, but his art is limited to wearing an expressionless mask and doing readings of beatnik “cut-up” poetry. Sarah has entered much riskier territory, and Doug is drawn to her emotional vulnerability.

After an all-night conversation, he wants to photograph her: “The light is perfect in here,” he says, and in response, she slices her forearm with a razor blade and insists he take a picture. This sets the tone for their romance, which cycles through periods of light and darkness, with Doug trying to counterbalance Sarah’s depression and fear. All this is rendered in Burns’ signature style, exquisitely detailed ink drawings with the weight and precision of woodcuts.

Contrasting with this is Doug’s ongoing dream, in which he wanders through the Casbah and ends up becoming a worker in the “hive,” a mysterious conical-shaped structure that houses women who have been chosen to be “breeders.” The dream sequence is drawn in the lighter clear-line style created by Hergé, the creator of the Tintin comic-book series.

Doug’s dream self is an elongated version of Tintin and shares the iconic character’s shock of hair and blank, mask-like face. And like Tintin, this dream self has adventures abroad, in an Orientalist bazaar full of strange foreigners who have incomprehensible local customs. (To drive this similarity home, Doug’s performance name is “Nitnit,” and the format of the hardcover version of this novel was exactly the same size and format as the Tintin books.)

There are homages to other genres, too: The talking maggots, lizard men, and pig-like creatures of Doug’s dream pay a debt to the cliché monsters and creatures of 1950s horror movies and comic books. And Doug courts Sarah by giving her a stash of 1960s romance comics, which she devours, craving emotional intensity and repetitive plots.

“Listen to this,” Sarah says, lying naked in bed with Doug, “Our lips touched incredibly briefly with tantalizing sweetness…”

These are an awful lot of plot elements to make into a coherent narrative. In less-skilled hands, they might have been too showy (Look! I’m referencing Tintin!) or splintered into incoherence. Yet Burns holds them all together, jumping between Doug’s past, present, and future, and interweaving the dream narrative.

What allows this fluid movement is Burns’ masterful use of graphic structure. Each page is composed of a grid of slim rectangles, six across and three deep. He combines these rectangles to make larger frames, as needed, but their spatial logic is felt underlying each page.

And when he switches from one narrative thread to another (dream to reality, past to present), these slim rectangles re-emerge in solid colors, creating a stutter that signals the change. All great works of fiction create their own rules and train the reader to understand them, and Burns achieves this without compromising the flow of the story.

Ultimately, Burns’ achievement is not just the clever referencing of different genres (adventure, horror, romance), but the use of all these elements to tell an emotionally resonant story. Last Look is the record of Doug’s journey through life. As we watch him lose his boyish good looks and coarsen into middle age, all the while haunted by his love affair with Sarah, we come to empathize deeply. Burns has created an emotionally resonant story that pushes the boundaries of the art form.

A.X. Ahmad is the author of the suspense novels The Caretaker and The Last Taxi Ride. He is a lifelong reader of graphic novels, which used to be called comic books.