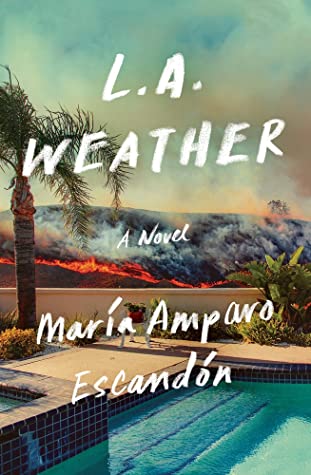 For anyone who grew up in Los Angeles, as I did, reading L.A. Weather is like a visit home. María Amparo Escandón captures brilliantly the sights, sounds, and scents of the metropolis — each enclave with its own language, music, foods, and customs.

Structured as a diary for the year 2016, the novel follows the Alvarado family from one crisis to the next over the course of 12 months. Oscar, the patriarch of an old California family whose wealth has dwindled over the generations, is married to Keila, a Jewish Mexican, who is a successful artist. Their three married daughters are all accomplished professionals: Claudia is a chef with a widely viewed television cooking program; Olivia is an architect who has made a fortune flipping houses in gentrifying neighborhoods; and Patricia is a social-media guru.

Oscar and Keila live in a spacious and comfortable house in an upscale neighborhood of Los Angeles. However, this is no utopia where it’s always 74 degrees and sunny. Weather is a problem. The city and surrounding areas are going through a dry spell, and Oscar has become so obsessed with the lack of precipitation that he can’t tear himself away from the Weather Channel. In fact, he is distracted to the point that instead of attending to the grandchildren who have been left in his and Keila’s care, he almost lets them drown in the family pool.

Keila, unable to comprehend Oscar’s sudden indifference toward her and the family, begins to suspect her husband is having an affair. He sits in silence in front of the TV or disappears for days at a time. As it turns out, Oscar isn’t seeing another woman, but he does have a secret love, one that engrosses him entirely.

Keila feels so neglected that, after 39 years of marriage, she decides to divorce. However, at the insistence of their daughters, she and Oscar agree to give their relationship one more year, during which each will make an effort to be a better spouse. As Oscar grapples with the devastating situation that is sapping his energy, Keila tries to resist the temptation of an affair.

In the meantime, the girls’ own marriages begin to implode. Olivia, whose twin daughters were born through artificial insemination, finds herself at loggerheads with her husband over what to do with the surplus embryos. Claudia, unexpectedly diagnosed with a brain tumor and hospitalized, discovers that her husband — ostensibly the perfect partner — is having an affair and callously making plans for her death. And Patricia realizes that the two-career marriage that gives both her and her spouse total freedom provides no sense of intimacy and warmth.

In addition, each daughter is going through a personal struggle. On a visit to Lola, the girls’ childhood nanny, Olivia suddenly suffers a bout of guilty conscience. Lola, the voice of moral rectitude and common sense, makes Olivia see that by buying up houses in the barrio and reselling them for an astronomical profit, she is harming fellow Latinos. Claudia, a kleptomaniac, must deal with her impulse to steal. And Patricia, whose son was the product of a rape, realizes she must be supportive as he struggles to decide whether he is gay. She must also come to terms with her own nymphomania.

However, the power of this novel stems less from the Alvarados’ ordeals than from the tremendous love that binds them — a love that makes itself felt in countless actions big and small: in the way the girls rub each other’s backs, in their bickering and teasing at the dinner table, in their efforts to protect each other no matter what, in their struggle to understand and support their parents, and in the enthusiasm with which they embrace both their parents’ religions.

Love emanates especially from Keila’s kitchen — redolent with steamed nopales with onion and epazote, huitlacoches with calabacitas and béchamel, shrimp in pipián mole, home-baked challah, gefilte fish, and matzo ball soup. Perhaps in the future, more aromas will be added as, at the end of the year, Patricia takes up with Hiroshi, whose sushi restaurant is a local success story.

As much as the Alvarados, the protagonist is the metropolis itself — not just the urban center, but the outlying areas, where Mexican laborers work the land. On one of his secret visits to the outskirts of the city, Oscar meets with conscientious and devoted farmworkers terrified of being deported, and for whom he feels a special affection. On his way home, he reflects on the reality of the city:

“Los Angeles was whatever you wanted it to be, and that was thanks to the constant influx of immigrants arriving with their dreams…Every race, religion, nationality, gender, sexual orientation, and food preference was well represented within Los Angeles County, and this is what Oscar loved most about his city: how it welcomed everything and everyone.”

Escandón’s portrait of L.A.’s Hispanic communities is especially rich and nuanced. While many authors depict Mexicans and Mexican Americans as uniformly poor and marginalized, she belies the stereotype. Many of her characters are financially comfortable and well-integrated into American society, while others, like Lola, are integrated yet cling fiercely to old traditions. Still others, like the farmworkers, are making lives for themselves in this country yet feel insecure and vulnerable.

I left Los Angeles decades ago with no regrets, but I admit that L.A. Weather made me a little homesick. María Amparo Escandón evokes the best of the city — the vibrant ethnic communities, the diverse food cultures, the multilingualism, and the broadmindedness (although the corruption, materialism, and traffic don’t escape her attention). In the Alvarados, she portrays a strong Mexican American family in crisis — a family so invincible that even L.A. weather can’t destroy it.

Bárbara Mujica is a novelist, short-story writer, and essayist. Her novels include the international bestseller Frida, based on the relationship between Frida Kahlo and Diego Rivera, Sister Teresa, based on the life of Teresa of Ávila, and I Am Venus, which explores the identity of the model for Velázquez’s Rokeby Venus. Her new biofictional novel, Miss del Río, based on the life of Mexican film star Dolores del Río, will be published next year by Graydon House/HarperCollins. Her collection of stories, Far from My Mother’s Home (Spanish edition: Lejos de la casa de mi madre), focuses on the immigrant experience. Collateral Damage, published last March by the University of Virginia Press, is an edited collection of women’s war writing, and Imagining Iraq contains short stories told from the perspective of the mother of a veteran.