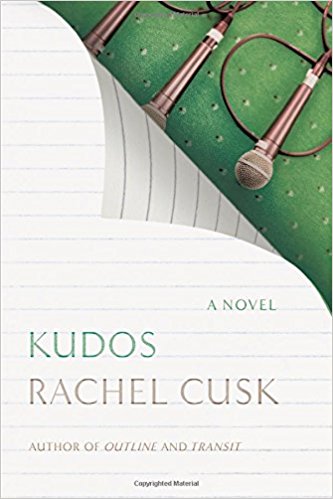 You either love Rachel Cusk’s narrative technique or you don’t, and if you are still with her for Kudos, the final installment of her trilogy, then it must be because you love it.

Here again are the themes that are familiar from the first two books, Outline and Transit: the self-effacing narrator whose name is mentioned only once; the telling of the story through a series of conversations rather than the showing through action; the lack of a traditional plot or an obvious narrative arc; the preoccupation with the cruelties of divorce and the damage that adults do to their children; and the business of being a high-brow, belletrist author.

Like Outline, the first book of the three, Kudos begins with a startlingly frank conversation on a plane between two strangers, the narrator and her seatmate, a recently retired financier with a difficult daughter and a dead dog. He animatedly tells her deeply intimate stories, “as though he had discovered the power and pleasure of reliving events with their sting removed. The skill, I saw, lay in skirting close enough to what appeared to be the truth without allowing what you actually felt about it to regain its power over you.”

And there it is, the laconic observation that reveals the narrator — who the reader identifies as the author — while she is revealing another character in the story. Though we continue to learn about her from her own spoken words, it is through her reflections on the other characters and the words that she provokes from them that the narrator most shows herself.

Readers who have been waiting for a big reveal in the finale will be disappointed, as Cusk maintains the narrator’s reserve to the very end. In fact, the mystery only increases. To everyone’s surprise and consternation — including the reader’s — she has remarried but declines to reveal to whom or why.

Perhaps the husband is the reason her son chose to move out of her house. As in the previous two books, her children make cameo appearances via phone calls, where, in a brief dialogue of a few pages, the reader gets a vivid glimpse of their emotional state at that exact moment.

When last they were heard from in Transit, their dad had left them home alone, and they were beating the crap out of each other. This time, one of them seems to be doing okay, and the other is definitely not. The narrator’s motherly wisdom to her troubled child? “You can’t tell your story to everybody, I said. Maybe you can only tell it to one person.”

Is she talking to her son or the reader?

The narrator has enjoyed an increase in reputation since the Outline days, when she was teaching a writer’s workshop, and now she is something of a star on the literary-festival circuit, traveling from unnamed European city to unnamed European city, her schedule packed with interviews, lunches, and cocktail parties.

Kudos strips away the noble, glamorous veneer to reveal the profane guts of the book industry. Her publisher explains that his ability to publish her esoteric work is only made possible by the firm’s popular Sudoku line. Once a salesman at the publishing house before being elevated to a senior position and saving the company, he notes, “People dislike being made to feel stupid, and if you arouse those feelings, you do so at your own cost.”

It’s a pointed remark to the narrator, a fictionalized version of Cusk, a writer who demands of her reader all their attention without offering such fripperies as conventional plot or dramatic tension in return.

In a series of comical interviews, journalists fill their allotted times with philosophical monologues and unsolicited advice to the narrator on how to improve her life, the intimate details of which they are familiar with through her writing.

When they aren’t talking of writing and relationships, the characters discuss the upcoming Brexit vote. As usual, the narrator is agnostic on the subject, noting:

“It was true that the question of whether to leave or remain was one we usually asked ourselves in private, to the extent that it could almost be said to constitute the innermost core of self-determination. If you were unfamiliar with the political situation in our country, you might think you were witnessing not the machinations of a democracy but the final surrender of personal consciousness into the public domain.”

To leave or to stay is a dilemma that haunts the trilogy, as the narrator comes to terms with her decision to leave and the consequences she suffered for it.

The irony is that regardless of whether they vote to leave or stay, “Europe is dying…and because every separate part is being replaced as it dies it becomes harder and harder to tell what is fake and what is real, so that we might not realise until the whole thing has gone.”

Every historical zone in every European city is but a picturesque backdrop for the same corporations: A Starbucks colonizes an historic bank in Amsterdam; an H&M occupies a listed neo-classical building in Barcelona; a McDonalds invades a landmark building in Paris.

The women, especially, ponder the toll a career in literature takes on motherhood, and the toll motherhood takes on a career in literature. They talk about how they bear the awful burden of patriarchal laws, with one divorcee saying of her legal status in her predominantly Catholic country, “In law the woman is temporary, between the permanence of the land and the violence of the sea.”

And that’s the final image of this beautiful, groundbreaking trilogy: a woman watching from a safe but “heaving” distance as a man asserts the cruel privilege given to him as a male. It is a strangely empowering end: a woman riding the troubled sea, coolly observing what’s happening on the shore.

The Wrong End of the Telescope: A Novel