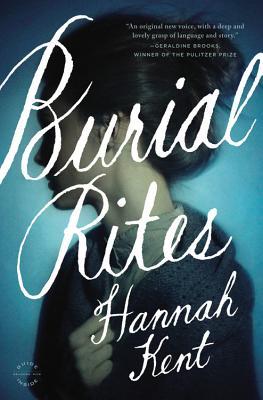 Iceland is famous for its wild, natural beauty: volcanic mountains, glaciers, cascading waterfalls and boiling geysers beneath a surreally massive sky of rushing clouds by day and trembling aurora borealis by night. In her haunting first novel, Burial Rites, Hannah Kent stunningly captures this setting and recreates the life of Agnes Magnúsdóttir (1795-1830), the last woman executed in Iceland for a capital crime.

The historical record is familiar to Icelanders: On a spring night in 1828, house servant Agnes woke neighbors with word that Natan Ketilsson’s Illugastir farmhouse was ablaze with Natan and his friend Pétur Jónsson trapped inside. When the fire was extinguished, it was discovered that the two men had been stabbed to death. Agnes was arrested along with two others, the farmhand Fridrik Sigurdsson and his teenaged girlfriend Sigrídur Godmundsdóttir. Sigrídur was sentenced to life imprisonment. Agnes and Fridrik received death sentences and were assigned to forced labor with local farm households pending their executions. On January 12, 1830, they were beheaded on a small hill in Vatnsdalshólar in the Húnavatn district. Their executioner, appointed by District Commissioner Björn Blöndal, was Natan’s brother, Gudmundur Ketilsson. The National Museum of Iceland preserved the execution block and axe, and a memorial stone marks the execution site.

Close observation and research by Kent, an Australian in her late 20s, are evident throughout the novel. Primary source documents accompany what Kent calls “fictional likelihoods,” which were based on her year spent in Iceland as a high school exchange student, her subsequent visits there and, most important, her rich empathetic imagination.

Among these “fictional likelihoods” are vivid portrayals of the real participants. In Kent’s hands Agnes, an orphaned servant, becomes a reminder of Thomas Hardy’s Tess Durbeyfield; Natan, an herbalist/farmer, becomes a shaman and Agnes’s on-again-off-again lover; and Rósa Gudmundsdóttir, one of Iceland’s most famous poets, becomes another of Natan’s lovers. In the novel, District Commissioner Blöndal takes responsibility for all bureaucratic elements of the trial, the forced labor assignment and the execution; Thorvardur “Tóti” Jónsson, the young clergyman assigned to be Agnes’ confessor, elicits her backstory and moral/psychological musings. The real Fridrik, Sigrídur and the farm family that housed Agnes until her execution are brought to life as well.

Besides containing convincing character development, Burial Rites also depicts Iceland’s starkly beautiful, sparsely peopled landscape. The novel’s treatment of character and setting is structurally significant as well. Against the backdrop of the open, natural landscape, Kent situates many of the novel’s scenes in badstofas — traditional communal sleeping rooms — where the ever-present supporting characters establish an atmosphere of oppressive, judgmental social cohesion. Emerging from this stifling communal life are the few individuals — principally Reverend Tóti, the farm wife Margrét and, of course, Agnes herself — who ambiguate societal norms and pit individual moral dilemmas against ethical standards.

Given her large cast, Kent has wisely chosen to simplify some characters and complicate others. Assigned appropriately monochromatic treatments are the greedy, immoral Fridrik; the officiously bureaucratic Blöndal; the enigmatic Rósa; and the scheming Sigrídur. More multidimensional are the manipulative, amoral Natan; the spiritually and sexually anxious Reverend Tóti; the conflicted Margrét; and Margrét’s squabbling daughters Steina and Lauga. These characters help the reader understand and sympathize with Agnes and her decision to kill Natan.

Kent deftly knits the story arc from multiple points of view, interior monologues, dialogue-rich scenes, confessions, flashbacks and official documents. Shifting the narrative focus among various characters ultimately presents a fully rounded portrait of Agnes herself, with the most lyrical writing — prose poems, in fact — coming in her interior monologues. Ultimately the reader emerges from the novel with a powerful sense of Agnes’ full humanity — her capacity for suffering and wisdom, for vulnerability and strength, for violence and love.

Readers may find early 19th-century Iceland’s rugged way of life utterly unfamiliar and its place names and patronymic naming patterns maddeningly mind-boggling. Even though Australia is about as far away from Iceland as it’s possible to be, Kent is at home in this world and this novel and invites her reader to be, too. It is no hyperbole to put Burial Rites in the same company as Hardy’s Tess of the D’Urbervilles,Sigrid Undset’s Kristin Lavransdatter, Ingmar Bergman’s “Virgin Spring” and Akira Kurasawa’s “Rashomon.”

Poets W.H. Auden and Louis McNeice traveled together in the 1930s to Iceland. Like many who have visited the island before and since, they were moved deeply by what they saw and wrote about it. I think they would have admired Hannah Kent’s Burial Rites. Perhaps the last lines of Auden’s “Journey to Iceland” are an apt tribute to this brilliant first novel:

Tears fall
in all the rivers. Again the driver

Pulls on his gloves and in a blinding snowstorm starts

Upon his deadly journey; again the writer

Runs howling to his art.

Rhoda Trooboff, a longtime literature and writing teacher at National Cathedral School in Washington, DC, is a publisher of children’s books at Tenley Circle Press, Ltd.