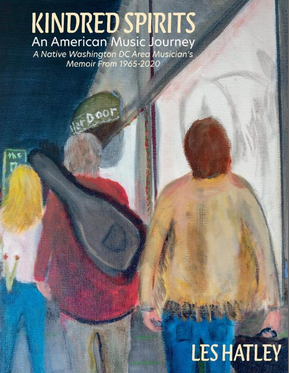 There’s a special poignancy to a book focused on the joy of live music as covid-19 threatens to destroy countless venues. Part memoir, but greater part scrapbook with captions, Kindred Spirits is an exhaustive collection of ticket stubs, newspaper clips, LP and CD covers, and other swag lovingly compiled by local musician Les Hatley that recounts his career as a guitar player in and out of numerous bands.

It doesn’t dish the dirt, so don’t expect a “DC Music Babylon” here. Instead, Hatley shares his self-published treasure trove of concert programs, behind-the-scenes green-room and rehearsal photos, and encyclopedic knowledge of a wide swath of DC music history beginning in 1965.

The District doesn’t often get the credit it deserves as an important music city. We hear regularly about Memphis, Detroit, and Nashville, and rightly so. However, as Hatley demonstrates, DC has been an important music town for decades, fueling bluegrass, country, folk, and other genres. It’s not part of his purview here, but the city was a vital spawning ground for Go-Go and punk, too.

So, if you’ve got a skeptical out-of-town friend who needs convincing of Washington’s neglected stature, let them borrow your copy of the book that lays out some of the area’s vibrant music scene going back more than 50 years.

Hatley sure saved a lot of stuff. Some musicians — former Rolling Stone Bill Wyman comes to mind — are the type who collect and chronicle. Others are lucky to get to gigs on time and live past the age of 27. Hatley is in the Wyman camp. He’s a survivor who’s cobbled together an interesting career playing in a wide array of settings; a respected songwriter; and someone whose music has been features on soundtracks for shows on MTV, Animal Planet, Discovery, TLC, and PBS. He’s played everywhere from dive bars to the Kennedy Center.

And Hatley, inducted into the Maryland Entertainment Hall of Fame in 2015, was also recognized with a “Wammie” from the Washington Music Association as a folk-contemporary instrumentalist.

In some ways, leafing through Kindred Spirits is like stumbling upon the yearbook of someone who knows a lot of people you know (or have at least heard of) and finding that it triggers your own memories. Hatley covers a lot of ground and does a decent job giving context and perspective, but if you aren’t already familiar with some of the people and venues, it’s an awful lot of detail to process.

On the other hand, if you lived through some of these times, especially if you’ve spent much of your life in the DC area since the mid-60s, Hatley’s journey will take you on a fun, nostalgic ride.

By Jonathan Lethem and Kevin Dettmar